Atum, or Atum Ra, was the supreme god of the Egyptian pantheon. He was responsible for the creation of the universe and the creation of many of the other Egyptian gods. The worship of Atum Ra was a prominent part of the ancient Egyptian religion. Atum Ra, and worship of him and other gods, were major parts of Egyptian lifestyle and culture. 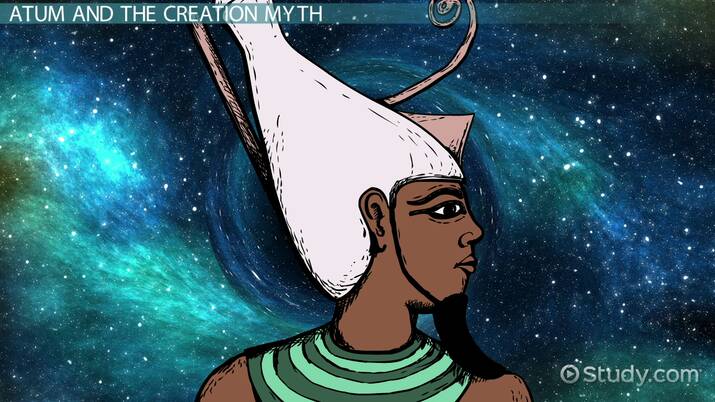 History and Facts About Egyptian Gods

In order to understand the ancient Egyptian religion, one must know certain facts about the Egyptian gods. Worship of the Egyptian gods was the way through which government was administered, the economy was controlled, and the interactions of Egyptian society were conducted. Natural occurrences were seen as the will of the Egyptian gods, either being evidence of favor or results of wrath.

One of the main places for the worship of the ancient Egyptian gods, including Atum Ra, was the city of Heliopolis. Worship of the gods was even more entrenched in this city than it was in other ancient Egyptian cities. Atum Ra was the first Egyptian god to be worshipped in Heliopolis, probably because of his nature as the creator god. This is displayed in its name, which means ''city of the sun.'' This refers to the main purpose of the city, which was the worship the gods of the sun, including Atum Ra. Eventually, all nine gods involved in the creation story, referred to collectively as the Ennead, were worshipped as a group in Heliopolis.

The meaning of Atum is ''completion.'' Atum Ra is associated with the completion of the creation of the universe and other gods. In most depictions, Atum wears a pschent, which is a double crown. This signifies his position as both the ruler of both Upper and Lower Egypt.

Atum has several specific responsibilities and associations. These demonstrate how important Atum was to Egyptian society. Aside from being the god of the entire universe, Atum was also the god of the evening sun. He was also associated with the scarab beetle, which was an important bug in Egyptian culture. It was said that Khepri, who was another manifestation of Atum, rolled the evening sun into the Earth every night in the form of a massive scarab beetle.

Egyptian God of the Universe

Atum Ra is associated with the evening sun or setting sun in his combined role as Atum and Ra, known as ''Re-Atum.'' This is connected with his association with the scarab beetle. It is important to note that another god, Amun Ra, is associated with the sun at mid-day. These are two incarnations of the same deity, or they can be thought of as separate entities. The mythological stories regarding their nature sometimes conflate and sometimes distinguish between the two beings.

Atum is thought of as the ultimate creator since he created himself, other gods, and the entire universe. Some of these gods were created during the process of the creation of the universe, and others were created after.

Atum created himself before the creation of the universe and the gods. He emerged from the chaos of the universe, which was referred to as ''Nun,'' and was later personified in the god of the same name. This emergence from Nun was Atum's act of self-creation. From the time of his creation, he assumed the form of an old man. His self-creation was enabled by a force, ''heka,'' which was the force through which he created the other gods and ordered the universe into existence.

Atum Ra: The Creation of Other Gods

As part of the process of the creation of the universe, Atum Ra created many other gods. This was mainly done with the help of Iusaaset, his consort. Her name means ''the great one who comes forth,'' and she is worshipped as the mother of all Egyptian gods. In some narratives, Iusaaset is said to be the literal shadow of Atum.

The Egyptian gods which Atum created during the creation of the universe are referred to as the Ennead. Important members of this category include Shut, Tefnut, Geb, Nut, and Nun.

Nun was the personification and entity of chaos. He was created when Atum ordered chaos to order itself through the power of ''heka.''

Shut, or Shu, is the Egyptian god of air. He left with Tefnut to create the world. He created the goddess Nut and the god Geb with Tefnut.

Tefnut is the Egyptian goddess of moisture. She left with Shut to create the world, and gave birth to the goddess Nut and the god Geb.

Geb is the Egyptian god of the earth. He mated with Nut to produce many other Egyptian gods.

Nut is the Egyptian goddess of the sky. This goddess carries Atum Ra wherever he desires, and usually takes the form of a cow. Through mating with Geb, she gave birth to many other gods, including Osiris, Isis, and Horus.

Atum Ra is a prominent Egyptian God who was the central figure in the story of the creation of the universe. His role as the creator god resulted in him being the first Egyptian god worshipped in Heliopolis. He is associated with the entire universe, the evening sun, and scarab beetles. His association with the evening or setting sun is a product of his dual nature as Atum and Ra, known as ''Re-Atum.'' Worship of Atum Ra and other Egyptian gods were central to many aspects of Egyptian life. In most depictions of Atum, he is shown wearing a ''pschent,'' also called a double crown. This signifies his nature as ruler of Upper and Lower Egypt.

Atum Ra's role in the creation story in Egyptian mythology explains not only his role in the cosmos but also how many other gods in the Egyptian pantheon came into being. His consort, Iusaaset, is worshipped as the mother of all deities. Her name means ''the great one who comes forth.'' These gods are referred to as the Ennead, and among these are Nun, Shut, Tefnut, Geb, and Nut.

What is the Egyptian creation story called?

The Egyptian creation story has no unique name, but the gods created through the story are all referred to as the Ennead gods. This group of nine gods was the main focus of worship at Heliopolis.

Who was the Egyptian god of creation?

The Egyptian god of creation was known by the name of Atum, Ra, Atum Ra, or Khepri. Through the process of creating the universe, he also created other gods, including the personification of Nun, or the waters of chaos from which he arose.