Copyright
Coralie Nettles, Katie Chamberlain
Explore what a star is and what an average star is. Discover an average star's size. Understand how a star life begins. Learn about the lifespan of a star. Updated: 10/29/2021

What is a Star?

Many stars can be observed by looking into the night sky. But what's a star? A star is an astronomical body that shines from radiation produced internally through nuclear reactions. They are gaseous bodies that are made predominantly of hydrogen and helium. At the beginning of their life, stars fuse hydrogen into helium to produce energy. After hydrogen fuel has been exhausted, more massive stars begin to fuse heavier elements. When a star reaches the end of its life, it releases most of its mass back into the interstellar medium. This is done either through the formation of a planetary nebula or a supernova. In this way, stars produce and distribute heavier elements such as carbon, nitrogen, and oxygen in the universe.

The Sun is the closest star to Earth; however, many other stars are visible at night. One of the brightest stars in the night sky is Sirius, two stars in a binary system, Sirius A and Sirius B. It appears so bright because it has a high luminosity and is relatively close to the solar system. Another star that is visible at night is Alpha Centauri. Alpha Centauri is also a multiple star system, consisting of two Sun-like stars and a smaller, dimmer star.

What is an Average Star?

Average stars are also known as intermediate-mass stars. These stars have lifetimes between 50 million and 20 billion years. These stars generate energy from the fusion of hydrogen to helium, then helium to carbon.

But how big is the average star? These are defined as stars with masses between 0.5 and 8 times the Sun's mass, known as solar masses ({eq}M_\odot {/eq}). One solar mass is {eq}2\times10^{30} {/eq} kg. These stars are called dwarf stars, and their life cycle has three main phases:

If the size of a star is greater than the average star size, meaning it has a mass greater than 8{eq}M_\odot {/eq}, it is called a high-mass star. These stars start their life in much the same way as an average star. However, they have much shorter lives, and when they exhaust their fuel source, they experience a supernova. These stars end up as either neutron stars or black holes for the most massive stars.

Is the Sun an Average Star?

Regarding mass, size, and luminosity, the Sun is considered an average star. As a result, other stars will often have their properties represented in terms of the Sun.

How Does a Star Life Begin?

Stars are formed from matter in space through gravitational attraction. But how does a star's life begin? They form out of regions known as molecular clouds or nebulae. Throughout millions of years, small differences in density cause the gas to collapse. As it collapses, the clouds will break into fragments that begin to radiate energy from gravitational potential. Eventually, the gas becomes so dense that it cannot radiate the energy away, and it begins to heat up. This is known as a protostar cloud.

The area at the core of the cloud will continue to increase in temperature. It will eventually build up enough thermal pressure to balance the gravitational collapse, known as hydrostatic equilibrium. Ultimately, the core will become hot enough to begin fusing hydrogen. At this point, the protostar becomes a star. 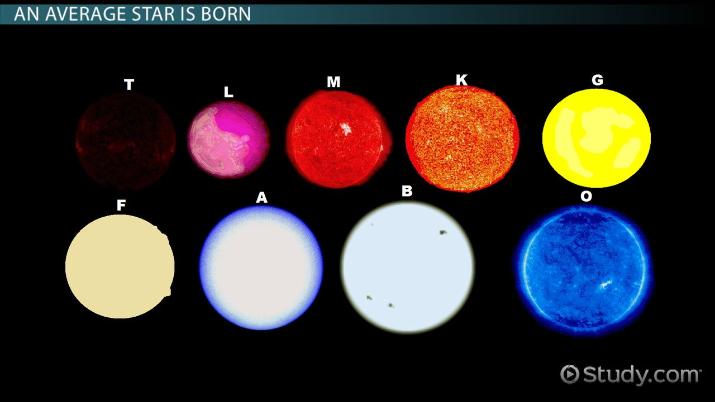 The Lifespan of a Star

The most important quantity for the lifespan of a star is the initial mass of the star. Average stars have intermediate or medium mass. These stars spend most of their lives as yellow dwarf stars. When their fuel is exhausted, they become red giants and then white dwarves. When the core eventually cools and no longer emits light, it is called a black dwarf. High-mass stars have a much shorter life as they burn through their fuel much more rapidly. When a high-mass star runs out of fuel, it becomes a red supergiant. Depending on the mass, it will end its life as either a neutron star or a black hole.

The Life Cycle of an Average Star

After the protostar phase, the life cycle of an average star starts with a yellow dwarf phase. The Sun is an example of a yellow dwarf, also known as a main-sequence star. When a star begins its main sequence life, it is fusing hydrogen to helium within the core. Throughout the life cycle, the core begins to be depleted of hydrogen. As the composition of the core changes, the star leaves the main sequence and becomes a red giant.

The star will begin to expand as hydrogen fusion moves away from the core, now predominantly inert helium, into shells. As the star expands, the core shrinks under gravitational contraction. If the temperature and density are high enough, the core can begin fusing helium to carbon.

Eventually, the star runs out of useable fuel. At this point, the star's outer layers are ejected, and a planetary nebula is formed. The gas drifts off into space, leaving the core, known as a white dwarf. This is the medium mass star life cycle and the fate of the Sun.

The Life Cycle of a Big Star

High-mass stars begin life in much the same way as average stars. However, they have sufficient mass and gravitational potential to continue fusing elements heavier than carbon. Massive stars can fuse carbon at the end of helium fusion, and fusion can continue until iron is formed. However, the fusion reactions of elements heavier than iron do not release energy. At this point, the star collapses rapidly, and the temperature spikes to 100 billion degrees, creating a violent explosion that ejects all the star's outer layers known as a supernova.

After a supernova has occurred, there are two possible outcomes depending on the mass remaining. If the collapsing core has a mass of less than 2{eq}M_\odot {/eq}, the collapse will continue until electrons and protons combine to form neutrons. Degeneracy pressure eventually stops the gravitational collapse, known as a neutron star. If the core is larger than this, nothing can stop the gravitational collapse. The core forms a singularity known as a black hole with zero volume and infinite density.

The life cycle of a star depends on its size. Stars with masses between 0.5-8 solar masses are called average stars. Average stars, like the Sun, have three main phases, which are yellow dwarf, red giant, white dwarf. The Sun is currently in the yellow dwarf phase of its life. Stars produce energy through hydrogen fusion. When hydrogen in the core is depleted, fusion begins in shells around the core, beginning the red giant phase as the star expands. Eventually, the red giant will eject its outer layers into space, leaving behind the core known as a white dwarf. The white dwarf will cool over billions of years and end up a black dwarf. High-mass stars will end their life as either a neutron star or, for the most massive ones, a black hole.

What is the difference between a massive star and an average star?

The difference between a massive star and an average star is the length of their life and how they end up. Massive stars have shorter lives and end up as either neutron stars or black holes. Average stars will end up as white dwarfs.

How long is the life of a star?

Supergiant Star Overview & Classification | What is a Supergiant?

How Energy Moves Within the Sun

How to Find the Size of a Star