Copyright
Peter M. Williams, Erika Steele
What is the Gram stain of Bacillus Subtilis? Learn about Bacillus Subtilis' characteristics, shape, and how it is best used to help in medical research. Updated: 11/03/2021

What is Bacillus Subtilis

Bacillus subtilis is a bacteria known to produce heat-resistant spores known as the endospore. The spores are usually ellipsoidal, and they help preserve the genetic material of the bacteria under unfavorable environmental conditions. Thus, the main reason for spore production in Bacillus subtilis is survival.

Bacillus subtilis is commonly found in the soil but can also be cultured in a microbiology laboratory. This bacterium belongs to a group of gram-positive bacteria since it has a thick peptidoglycan layer. Peptidoglycan is a molecule found on the cell wall of bacteria.

In addition, Bacillus subtilis fall under the phylum Firmicute, a group of bacteria that produces endospores.

A complete set of genetic information in any living organism is referred to as a genome. Bacillus subtilis is comprised of 4100 genes that are responsible for the coding of proteins. This bacterium has a total number of 4,214,630 base pairs. The guanine-cytosine content is relatively low, and it comprises 43.5% of the total base pairs. The majority of Bacillus subtilis genes are represented once (53%), while others are duplicates. These genes are entirely used and responsible for producing secondary metabolites such as antibiotics and enzymes.

Bacteria exchange genetic information through various mechanisms. Transformation occurs when naked DNA from the donor or environment is transferred into a recipient bacteria cell. This phenomenon is mainly known as DNA-mediated transformation. Surprisingly in this process, DNA molecules with high molecular weight, 100,000 times larger, can pass through the bacteria cell. 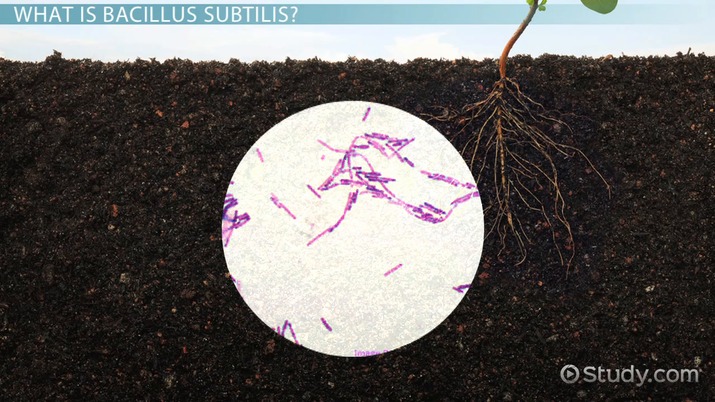 Try it now
Back
Coming up next: Simple and Differential Stains: Definition and Examples

The ability of Bacillus subtilis to form subterminal endospores makes it unique among the other members of the genus Bacillus. The formation of an endospore is a response to nutrition deprivation or harsh environmental conditions. Bacillus subtilis has a single chromosome that replicates bidirectionally. Peptidoglycan surrounds its cell, and it utilizes a flagellum for motility.

Bacillus subtilis arrangement is quite diverse, and they may be arranged as single or chain cells. When two bacilli combine, they are diplobacillus, bacilli forming a chain are known as streptobacillus, and those appearing as oval or sphere-shaped are referred to as coccobacillus, while those touching each other on ends form palisades. The length of chains depends on the type of media used. For instance, Bacillus subtilis grown on hard agar media has been shown to have long chains.

Like most members of the genus Bacillus, the shape of Bacillus subtilis is like a cylindrical rod. Rod-shaped bacteria are also referred to as bacilliform, and they either occur singly or as a group. Observation of Bacillus subtilis under the microscope have vegetative cells appearing red while the endospores appear green in color. In addition, colonies of Bacillus subtilis can either appear as volcanic-like, crater-like, concentric rings, or jagged branches.

Bacillus subtilis requires essential nutrients for growth since it cannot make its own food thus, heterotrophic. These include essential salts, carbon, nitrogen, and phosphorous. This bacterium does not require oxygen to grow, and thus it is a facultative anaerobe. It can make ATP in the presence of oxygen, and it can switch to fermentation when oxygen is lacking. Under aerobic conditions, Bacillus subtilis have oxygen as the terminal electron acceptor and nitrate or nitrite as the terminal electron acceptor under anaerobic conditions.

Bacillus subtilis is a gram-positive bacterium. It has a thick peptidoglycan layer and teichoic acid in its cell wall. A Gram stain test is used to classify bacteria species according to their reactions with various stains/dyes. This test mainly targets the structural characteristics of a bacteria cell wall. During a Gram staining test, Bacillus subtilis retain the crystal violet dye, appearing purplish-blue under a microscope. This is due to the presence of a thick peptidoglycan layer.

Importance and Ecology of Bacillus Subtilis

Bacillus subtilis is commonly found in soil environments, in addition to its endospores. This bacterium also forms a mutualistic interaction with plants, and thus, it is quite common around plants' roots. It plays a significant role in carbon and nitrogen cycling because it produces numerous enzymes that degrade various polymers and substrates. The mutualistic interaction with plants also prevents pathogens such as fungi and bacteria from invading the plants. In nutrition deprivation, Bacillus subtilis produces spores and antibiotics that toxify the other surrounding microbes. This limits the competition of nutrients with other microbes.

Bacillus subtilis has been utilized in various researches, including understanding the concept of cell-to-cell communication. This communication allows the bacteria to interpret the environmental signals with those within a microbial community. This helps in the maintenance of cell differentiation within a bacteria community. In addition, Bacillus subtilis is utilized in research studies revolving around stubborn diseases caused by other microbes such as Escherichia coli. Bacillus subtilis can produce antibiotics and enzymes which have antimicrobial activities. Exploring these metabolites can help in curing and treating stubborn bacterial infections. In general Bacillus subtilis is studied due to its role in cell communication, bioremediation, and its antibiotic properties.

Even though Bacillus subtilis is considered non-pathogenic. It has been attributed to some infections and disorders such as eye, soft tissue, lung infections, and strong foot odor. In addition, even though its spores are utilized as probiotics and improve gut health, Bacillus subtilis can cause severe effects on immunosuppressed individuals such as cancer patients.

Bacillus subtilis arrangement can occur as single or chain bacteria cells. They are also rod-shaped. This bacterium requires essential nutrients such as essential salts, carbon, nitrogen, and phosphorous for growth. However, it does not require oxygen to grow. Bacillus subtilis retain the crystal violet dye, thus appearing purplish-blue under a microscope during Gram staining. Bacillus subtilis plays a significant role in carbon and nitrogen cycling. It has been utilized in studying cell-to-cell communication and in the investigation of difficult-to-treat infections. Bacillus subtilis is non-pathogenic, but it may cause infections in immunosuppressed individuals.

What is the shape and arrangement of Bacillus subtilis?

Bacillus subtilis gram stain test reveals them as rod-shaped bacteria cells under a microscope. They may be arranged as clumps, singly, or as chains.

Is Bacillus subtilis harmful to humans?

Bacillus subtilis is considered non-pathogenic, and it is most useful in the production of antibiotics and its spores used as probiotics. However, this bacterium has been attributed to causing eye infections, soft tissue infections, lung infections, and also causing strong foot odor. These infections are common in immunosuppressed individuals.

What is the cell shape of Bacillus subtilis?

Bacillus subtilis cell has a rod-like shape. This shape is quite common with the members of Bacillus. Bacillus subtilis arrangement may appear as single chains (streptobacillus), or as dual (diplobacillus) chains.