Copyright
Denise DeCooman, Angela Hartsock
Learn about bacteria. Understand what the characteristics of bacteria are and see how bacterial infection is caused. Find out the benefits of bacteria to humans. Updated: 12/22/2021

Bacteria are a classification of microorganisms that belong to the domain Bacteria. Bacteria, along with Archaea, were once grouped into the Kingdom Monera, but now both classifications are considered separate domains due to differences in both genetic and anatomical characteristics. Currently, the three different domains used to group living things are Bacteria, Archaea, and Eukarya. Archaea contain unicellular organisms which are known as extremophiles and live in environments with extreme temperatures, high salinity, or in certain substances where most other types of organisms would be unable to survive. Eukarya consists of unicellular and multicellular organisms that have true nuclei in their cells. These organisms include protists, fungi, plants, and animals.

Bacteria are prokaryotes, which means that their DNA (deoxyribonucleic acid) is not contained within a nucleus, as these organisms lack a nuclear envelope. Bacteria are microscopic, which means they are way too small to see with the naked eye. To provide perspective on size, bacteria are typically roughly one micron in length or circumference, depending on the bacteria's shape. One micron is the equivalent of a millionth of a meter and the smallest unicellular eukaryotes (including protists like Plasmodium and Euglena) are typically observed to be between 10 and 100 microns. Bacteria are unicellular as well, which means that a single bacterium is composed of a single cell. Due to being so small, bacteria can be found in the geothermal vents deep within the ocean and also on the skin surface of most animals. 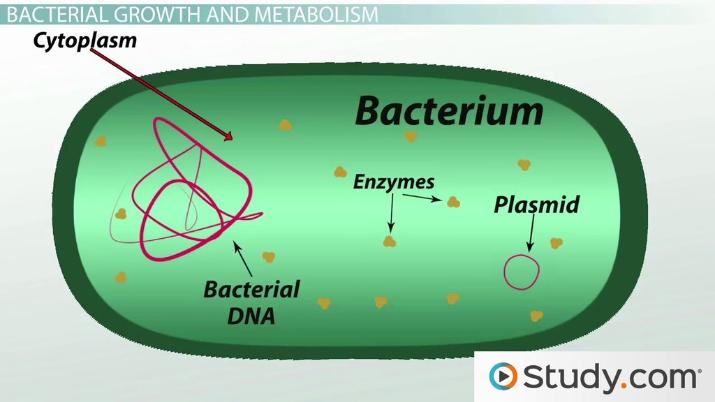 What are the Characteristics of Bacteria?

Bacteria are prokaryotes that lack a nuclear envelope, thus the DNA is found suspended in the cytoplasm. Bacteria are classified by their shape as well as how they react when treated with the Gram stain in the laboratory setting. Bacteria may be considered either Gram-negative or Gram-positive. Gram-negative bacteria do not react to the Gram stain due to their thin peptidoglycan layer and outer lipid layer. Gram-positive bacteria do stain because they have a thicker peptidoglycan layer and lack the outer lipid layer.

All bacteria have a plasma membrane, and some bacteria have projections, like flagella or cilia, on the outside of their bodies. These may help with their locomotion, depending on the structure and type of bacteria. Similar to plant cells, most bacteria have cell walls. Cell walls give the cell support and contribute to its structure and shape. The five most common types of shapes in bacteria are:

Bacteria are able to metabolize or break down, many different organic (carbon-based) and inorganic chemical substances which makes it easy for them to live in such diverse habitats. Some bacteria need oxygen in order to survive, and these bacteria are said to be aerobic. Bacteria that thrive in conditions where atmospheric oxygen is not present are known as anaerobic bacteria. Another type of bacteria that does not need oxygen but can survive in its presence are called facultative anaerobes.

Bacteria reproduce via the process of binary fission. The process of binary fission is somewhat similar to mitosis because both processes involve a parent cell splitting and giving way to two daughter cells. Some bacteria complete the process of replication via binary fission in just a few minutes while others take up to several years. Some bacteria form what are called endospores, which are spores that can enter a cryptobiotic, or dormant, stage until environmental conditions are favorable for their growth. These spores can withstand stressors such as extreme temperatures and toxic chemical substances where most other life forms would die off.

Some illnesses, like pneumonia, can be caused by different microbes, such as bacteria or viruses, or even by an individual accidentally aspirating food particles and fluids when they swallow. Several bacterial species which can cause pneumonia include:

Another bacteria which is capable of causing illness in humans is Treponema pallidum". This spirochete (corkscrew-shaped) bacteria is responsible for the sexually transmitted infection known as syphilis. The Haemophilus influenzae species of bacteria, which can cause pneumonia, can also cause bacterial meningitis. This depends on the route of infection, which is how the opportunistic pathogen gains access to certain parts of the body where it is capable of producing an infection and immune response in humans.

Some bacteria can even have the beneficial effect of helping to strengthen our immune systems. Bacteria which are beneficial to human beings actually help us carry out certain bodily processes. For example, some bacteria in our digestive systems facilitate the process of chemical digestion. For example, Bifidobacterium bifidum is a species of bacteria found normally in the intestines which helps with human immune function by fighting against certain microbes which can act as potential pathogens.

Most bacteria are currently believed by the scientific community to have no influence on human beings. Only around 5% of bacteria are known to cause illnesses in humans, and these bacteria are known as pathogenic bacteria. Other bacteria are beneficial to human beings and help facilitate the chemical breakdown of food in the human intestinal tract. Some bacteria even work to strengthen our immune systems and protect the human body from other microbes which could potentially cause harm.

What is bacteria and what are its characteristics?

Bacteria are prokaryotic, unicellular organisms which belong to the domain Bacteria and are not Archaea. Most bacteria have no known affect on humans but some are pathogenic and cause disease while others actually benefit human beings.

What disease is caused by bacterial infection?

Many different bacteria are capable of causing infections in humans. The bacteriumm, Treponema pallidum is responsible for the sexually transmitted infection known as syphilis and Haemophilus influenzae can cause pneumonia or bacterial meningitis in humans.

What are the 5 characteristics of bacteria?

Five characteristics of bacteria include being unicellular, prokaryotic, microscopic, lacking a nucleus, and having a plasma membrane. These traits are shared by all bacteria.

What Is a Foodborne Illness? - Definition and Common Types