What is a Bacterial Colony?

Bacteria grow on nutrient mediums as colonies. The bacterial inoculum consisting of a few bacteria is made to grow on the medium to form bacterial colonies. A group of microorganisms originates from a single mother cell. So, a colony of bacteria comprises a clone that is genetically alike. High-resolution imaging tools and biophysical characterization techniques have only recently improved the learning process of bacterial colony growth, as well as the growth of diverse colony sizes at the microscopic and molecular levels. In unfavorable settings that simulate feeding conditions, bacteria's immobility inhibits their development in comparison to planktonic growth, and bacteria's response to environmental stress becomes more intense. The distribution of bacterial colonies at a distance and the size of the colonies are seen as a function of the initial population. Research has shown that there is a threshold between microcolonies (radius <100-200 micrometers) and macro-colonies (radius >200 micrometers). The growth of microcolonies resembled planktonic growth and pH gradients were observed. The growth of microcolonies is slower than the planktonic growth and pH micro-gradients were observed to be present around them because of limitations in diffusion that might occur outside as well as inside the macro-colonies.

The bacteria that are in food products are immobilized whether they are added as inoculum or those that are present naturally. Bacterial colonies are the visible accumulations of many bacterial cells. They grow as colonies either on the surface or within the food while they interact with the micro-environment. The bacterial colony cells absorb nutrients from the surrounding food and return some end products to the surrounding region modifying the micro-environment.

It's difficult to find data on the development and metabolism of bacteria in colonies. The growth and metabolism of bacteria in food are investigated in broth media with planktonic cultures. From the initial studies, it has been observed that the growth of bacteria in the colonies occurs in a concentric pattern. The number of cells dividing reaches the exponential growth phase which is linearly associated with the Log of colony volume for colonies immersed or to the Log of colony area for surface colonies.

The studies on bacterial colony growth showed that the growth of colonies was determined by the local concentration of substrates and by the possible limitations of substrate diffusion or end-products in solids. 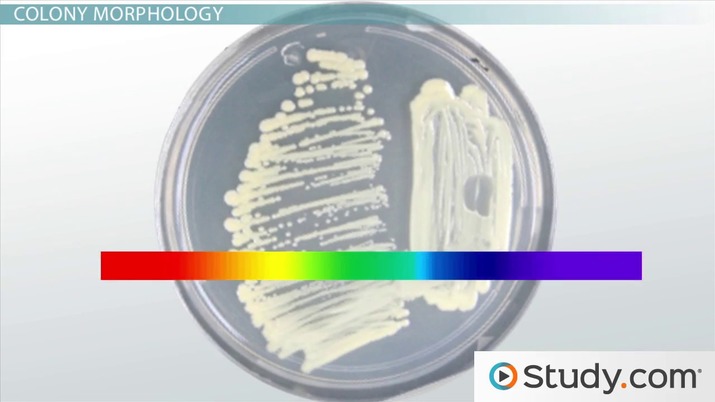 Try it now
Back
Coming up next: Binomial Nomenclature: Definition, Classification & System

What is colony morphology?

Colony morphology is one of the cultural characteristics of a bacterial colony that is visible on an agar plate. Identifying the bacterial colony morphology is a vital skill that is used in the microbiology lab to recognize microorganisms from their variety. A colony must be isolated from other colonies to identify its shape, size, color, texture, and surface appearance. Another vital colony characteristic of the bacteria is hemolysis. Hemolysis is the destruction of blood cells that are components of blood agar.

Bacterial colonies are groups of cells belonging to a clone grown either on the surface of the gel-type solid or embedded in it to absorb the nutrients from it. A bacterial colony is limited by size and it displays a maximum radius that ranges between a micrometer and a millimeter.

The pigmentation of bacterial colonies is white, buff, red, pink, purple, and so on. The colonies are opaque and transparent.

The opacity of the colony - The bacterial colony can be transparent (clear), or opaque (not clear), or translucent (almost clear with distorted vision), or iridescent (changing colors in reflected light).

The height of the bacterial colony growing on the surface of the medium was considered as a function of glucose concentration in the medium. The glucose concentration is low on the colony surface. The growth of bacteria and the development of pH profiles at all the places in the colony were evaluated by the presence and diffusion of glucose in the medium. Colony elevation is described as raised, flat, convex, and umbonate.

The margin or edge of a colony is visible with the dissecting microscope. The margins of the bacterial colonies are broadly classified as entire, filamentous, undulate, rhizoid, and lobate.

scanning electron micrograph of a number of pseudomonas aeruginosa bacteria

A bacterial colony is a mass of microorganisms developed from a single mother cell. A colony constitutes a bacterial clone that is genetically the same. To identify a bacterium or fungus, it is important to know how the organism grows on the media. This identification exercise will aid in recognizing and differentiating the growth characteristics of a bacterium on the agar plate. These different growth characteristics of bacteria are described in colony morphology. Colony morphology may not appear to be important initially, but it is necessary while identifying the bacteria. The colony features may aid in showing the bacterial identity.

The size of the small bacterial colonies is less than 1mm while the size of larger colonies is greater than 1mm. The various textures of a bacterial colony include dull, smooth, rough, glistened, wrinkled, mucoid and spreading. Bacterial colonies are categorized as circular, irregular, filamentous, spindle, rhizoid, and concentric based on their form. They are categorized as entire, lobate, undulate, filamentous, and irregular based on their margin. The height of the colony is found to be a function of glucose concentration in the food.

What is an example of colony morphology?

What are the types of bacterial colonies?

How is a bacterial colony formed?

When the bacterial cell is grown in the medium with necessary nutrients, the cell grows and develops into groups of bacteria called bacterial colonies. Based on the type of bacterial cell, the morphology of the colony differs. Many thousands, millions, and billions of cells are piled up to become visible to the naked eye in the colony.

How do you identify a bacterial colony?

What is a bacterial colony?