The human body is almost always exposed to a variety of substances that could compromise its health; to counteract this phenomenon, the human body is equipped with an immune system to protect itself against harmful bodies such as viruses, bacteria, and fungi. A major component in the immune system is white blood cells, which are made of several distinct of groups of cells with specific functions working together to protect the body. 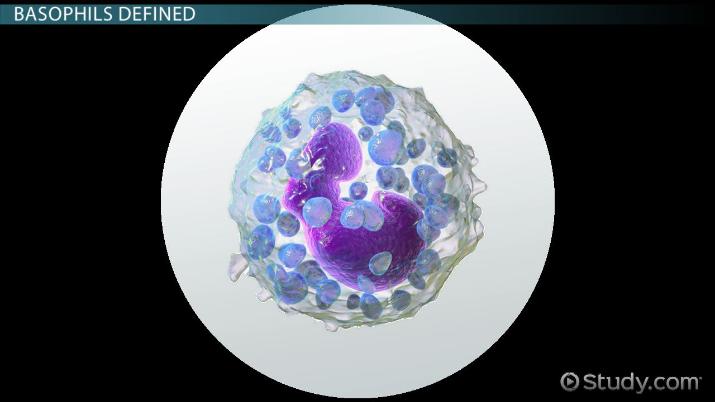 Basophils are mononuclear cells, with diameters ranging from 12-15 μm. They are round in shape, but that usually changes upon migration into tissues. The nucleus of basophils are usually bi-lobed or S-shaped, and are observed to have a purplish-black color upon the use of common basic dyes such as haematoxylin. Basophils have a short life span of about 1-2 days, after which they are degraded.

Upon activation by a threat such as foreign invaders or allergic reactions, basophils are said to degranulate, meaning that they release the granules that are stored in their cytoplasm. These granules contain chemicals that are necessary to mediate an immune response, and include heparin, serotonin, histamine, and antibodies. Each of these chemicals portray a role in mediating the immune response; for instance, heparin is a naturally occurring blood thinner that prevents clot formation. Moreover, basophils are the only white blood cells that act on "immune surveillance" by detecting and destroying cancer cells.

Histamines are nitrogenous compounds with the chemical formula C5H9N3 that are secreted upon the degranulation of basophils. Histamines mediate the immune response by acting as vasodilators, increasing the permeability of blood capillaries to make proteins and other chemicals able to pass through easily, hence increasing the leakiness of the capillaries. This boosts the immune response and initiates what is called an inflammatory response.

Histamines and basophils mainly act upon allergen exposure. Examples of said allergens include but are not limited to: pollen, insect bites, certain foods, and animal fur. Upon the release of histamines and the subsequent vasodilation, the body exhibits physical reactions such as congestion of the nasal cavity, sneezing, red watery eyes, chest tightness, and swollen eyes or lips. These symptoms are commonly known as an allergic reaction, and medications known as antihistamines are taken to reduce these symptoms.

Basophils, along with other types of white blood cells such as neutrophils and eosinophils, are classified as granulocytes. The term granulocytes originates from the presence of granules in the cytoplasm of these cells. These granules are seen as coarse harsh purplish granules under a microscope when stained.

When a microscopic image of a basophil is desired, a basic dye such as hematoxylin is employed; this dye is positively charged, so it will attach to the negatively charged surface of the nucleus and granules, staining them purple. In the image below, the bilobed structure of the basophil's nucleus is apparent, along with the cell's granular cytoplasm.

In addition to releasing chemicals upon degranulation, basophils also secrete an antibody termed immunoglobulin E (IgE). These antibodies bind to other basophils and to another type of white blood cells called mast cells to intensify the immune response. Mast cells are also granulocytes containing histamine and heparin that originate from the bone marrow; however, they circulate in the blood in their immature form, and only mature upon arrival to the affected tissue where the immune response is predominant, such as the skin. Mast cells also play a role in regulating homeostasis in the circulatory system, bone growth, and blood vessel formation.

As previously mentioned, basophils are the least abundant white blood cells, with concentrations ranging from 0.5-1% of the total white blood concentration. The level of basophils in an individual's blood sample is examined via a complete blood count test, where a machine or a laboratory scientist counts the different cell types present in a blood sample under a microscope. In normal circumstances, there should be around 300 basophils per microliter of blood.

An abnormal concentration of basophils observed with a complete blood count test could be a potential marker for an underlying disease. These underlying factors could originate from a range of phenomena ranging from endocrine disorders to infections.

The existence of abnormally high numbers of basophils upon a complete blood count is termed as basophilia. Basophilia could be attributed to a variety of factors:

Low counts of basophils in a complete blood count is referred to as basopenia. Basopenia could result from:

Basophils are a type of white blood cells that are vital to the immune system. Basophils are granulocytes that contain granules that contain important chemicals and enzymes, such as histamine and serotonin, that mediate the immune response upon release. These chemicals exert their function by increasing blood capillary permeability to cells and proteins during an immune response.

What is a normal basophil percentage?

The normal basophil percentage is 0.5-1% of the white blood cell population. There should be around 300 basophils per microliter of blood.

What happens if basophils are low?

A low level of basophils is referred to as basopenia. Basopenia could cause an allergic reaction or anaphylactic shock, where symptoms include vomiting, shortness of breath, and lightheadedness.

What causes basophils to be high?

High levels of basophils results in basophilia. Basophilia could result from a variety of factors such as hypothyroidism, myeloproliferative disorders, and autoimmune reactions.

What do basophils do in the immune system?

What are Neutrophils' Function? | Characteristics, Purpose & Structure of Neutrophils

What is Leukopenia? - Causes & Types

Sensory Nerves and Receptors of Muscles and Tendons

Lymphocytes Function & Types | What are Lymphocytes?

Phases of The Ovarian Cycle: Overview from Puberty to Menopause