Traci Cull, Kat Kadian-Baumeyer
Understand the definition of battery in tort law, learn the three main elements of battery, and what is required for aggravated battery to occur. Updated: 01/25/2022

The tort of battery is any type of physical contact with a person that is not consensual. It refers to intentionally touching another in an offensive way. The consequences of battery can be both civil and criminal. Civil liability would include monetary damages for the actual touching. This can occur even without an intent to harm the person. Criminal liability would be when the perpetrator intends to harm the plaintiff by touching. Criminal battery charges can range from a misdemeanor all the way up to a felony.

An intentional tort is a wrong done to another person that causes some type of harm or damage. Common examples of intentional torts include: assault, battery, intentional infliction of emotional distress, false imprisonment, defamation, trespass, invasion of privacy, and certain business torts. This lesson focuses on the tort of battery and also how battery differs from assault. 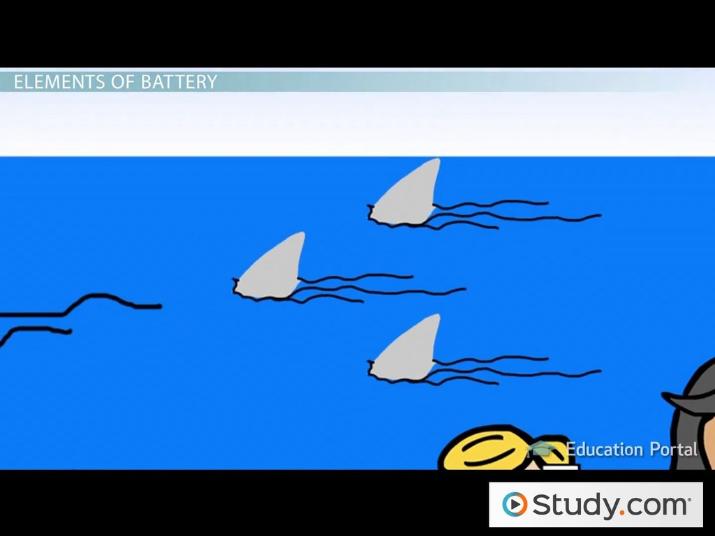 Coming up next: What Is Assault? - Definition of an Intentional Tort

Battery is the intentional causing of harmful or offensive contact with another person without consent. Breaking down the elements would include an act, intent, and offensive contact. It is an intentional tort that includes an act by a person with the intent to cause harmful or offensive contact to another and the contact actually occurs. What exactly does that mean? First, a tort is described as a civil wrong against someone where the remedy comes in the form of damages, not jail time. A tort is not a crime, but a civil wrong. Battery can be a criminal offense as well, but this lesson focuses on the tort (civil) offense. Battery is a type of intentional tort that does not require specific intent or awareness but can hold a person liable if offensive contact is made. The fact that the person doing the act intended to injure the other person does not matter, it is simply whether they intend to make contact and the contact is actually made.

The first element is the act itself. An injury to another would obviously be a battery, but an injury is not required for there to be a battery. A contact that is merely insulting or offensive to someone may be considered a battery as well. An example of this would be throwing water in someone's face. An injury does not necessarily occur but is an act that is offensive to someone. The idea behind the tort of battery is to protect people from others touching them in a non-consensual way. So where does the person have to touch in order for there to be a battery? It does not matter. They can touch any part of the body or even something that is attached to their body, like a purse. Touching someone's hair or foot would be considered battery. Grabbing someone's purse out of their hand has been considered an offensive act and considered to be actual contact with the body. A person having their dog go after someone and they nip or bite them is a battery. The same goes for when someone throws something on someone like water or paint. The plaintiff (the person injured) does not have to suffer an actual injury for there to be a battery. There simply needs to be an offensive contact of some type.

The second element of a battery is intent. The offender does not have to intend to injure the plaintiff, but merely intend to make contact. There are two types of intent in tort law. One is general intent which means that the defendant is substantially certain that their actions would cause a contact. Running past a group of people and knocking one of them down would be general intent since it is reasonable to infer that running in a crowd could cause contact. Specific intent is that the specific contact was intended. An example of specific intent would be going up to someone and pushing them into a wall on purpose. There was specific intent to do that action. If an action was meant as a joke, it can still be considered a battery if it is offensive. Someone brushing a person's arm in a large concert crowd would most likely not be considered a battery since being in the crowd has some assumptions of consent to be touched.

The final element of battery is that the contact is offensive or harmful. In order to determine if touching is offensive, the law looks to a reasonable person standard. That means, would a reasonable person have been offended? If so, then there is a battery. Tapping someone on the shoulder to get their attention is not battery. Rushing through a crowd and knocking into someone would be considered offensive since the act of being in a hurry was intentional and contact was made as a result. Putting an offensive sign on someone's back and the person not noticing it until later could still be a battery since offensive touching occurred.

If the defendant intended to cause injury or harm to the plaintiff or committed the act with a dangerous weapon, that would elevate the tort of battery to a criminal offense of criminal battery or aggravated battery. If the actions satisfy these requirements, there would most likely be a separate criminal trial for the criminal or aggravated battery on top of the civil trial for damages for the intentional battery.

Damages in a Battery Case

There is often confusion between the torts of assault and battery. Assault is the causing of a reasonable apprehension of an imminent harmful or offensive contact. No contact is required for there to be a tort of assault. This can include simply a verbal threat or attack on someone. The plaintiff does not have to show actual fear in order for there to be an assault but does need to show they believed there was an impending contact or battery. A person who intends to hit another and misses would still be liable for the tort of assault. Also, transferred intent applies here as well as with battery, so if the intent is to hit Adam, but Adam ducks and Bailey is hit, there is still a liability for the battery to Bailey. The same applies to assault. If something is thrown at Adam and Bailey thinks they are going to be hit, an assault on Bailey has occurred. The plaintiff must be aware of the assault at the time for there to be one. Since the requirement is an impending battery, they would need to know about it at the time. So threatening to harm someone in the future would not be imminent and not the tort of assault. Generally, words alone without some sort of action are not sufficient to constitute an assault. Leaning in towards someone while threatening them, or someone shoving their hand in their face is generally enough.

A battery is an intentional tort that includes an act by a person with the intent to cause harmful or offensive contact to another and the contact actually occurs. An assault is the causing of a reasonable apprehension of an imminent harmful or offensive contact. No contact has to occur for the tort of assault but is required for the tort of battery. There must be some sort of touching of the body or something attached to the body for a battery to occur. General intent occurs when the perpetrator is substantially certain their actions would cause a contact. Specific intent refers to the perpetrator intending to offensively touch the plaintiff. Determining the offensiveness of touching is based on the reasonable person standard. If a reasonable person would have found it to be offensive, then that is enough. If the defendant has an intent to commit harm to the plaintiff or uses a weapon it is elevated to an aggravated battery. For a battery, a defendant is liable for actual damages or injuries to the plaintiff as well as any consequential damages.

What are the 3 elements of battery?

Why is battery a tort and not a crime?

Battery can be a crime, however, here it is discussed as a tort. The criminal battery requires an intent to do wrong whereas a tort of battery does not.

What is the legal meaning of battery?

Battery is an intentional tort. It includes an act by a person with the intent to cause harmful or offensive contact to another and the contact actually occurs.

What is difference between assault and battery?

Assault is the causing of a reasonable apprehension of an imminent harmful or offensive contact. No contact is required for there to be a tort of assault. Battery requires some sort of contact.

Battery Tort in Law: Overview & Examples | What are the Elements of Battery Tort?
Related Study Materials

Remedies for Breach of Contract: Formula for Expectation Damages