Copyright
Melissa Hessing, Christopher Muscato
Learn about the history and significance of the Bay of Pigs Invasion. Understand what happened at the Bay of Pigs, when it happened, and what the outcome was. The invasion force was made up of 1,500 Cuban exiles, who opposed Fidel Castro's socialist regime. The invasion was a failure of US foreign policy and increased tension between the US and USSR. Updated: 02/28/2022

What was the Bay of Pigs Invasion?

The Bay of Pigs Invasion was a covert attempt by the United States to take the socialist Cuban dictator, Fidel Castro, out of power. The United States secretly funded and supported exiled Cuban revolutionaries who opposed Castro's regime to invade Cuba and take control of the government. These revolutionaries were defeated by Castro's military after the U.S. withdrew air support. The Bay of Pigs Invasion was a failure for the United States, and it further strained U.S. relations with Cuba and the Soviet Union during the Cold War.

When did Bay of Pigs Happen?

Following World War II, the relationship between the United States and the communist Soviet Union deteriorated quickly, and the nations of the world divided between the two sides. Both the United States and Soviet Union engaged in "proxy wars" in which the U.S. and USSR funded governments and militaries that supported either capitalism or communism. However, neither country wanted to ignite full blown war between the two nuclear superpowers. This standoff between the U.S. and the USSR and their allies became known as the Cold War, and countries around the world were divided between capitalism and communism. In 1958, Fidel Castro successfully led an armed coup against the pro-American government and established a socialist regime in the country of Cuba. Castro severed ties with the United States and formed an alliance with the Soviet Union. This alliance concerned U.S. President Dwight D. Eisenhower, who ordered the Central Intelligence Agency (CIA) to make a plan to overthrow Castro. In 1960, the CIA began recruiting and training Cuban exiles who opposed Castro. When President John F. Kennedy came to office, he was told of this plan, then known as "Operation Zapata". Kennedy approved that invasion and on April 17, 1961 the United States and former Cuban exiles landed in Cuba to fight against Castro's regime.

Why Did the Bay of Pigs Happen? 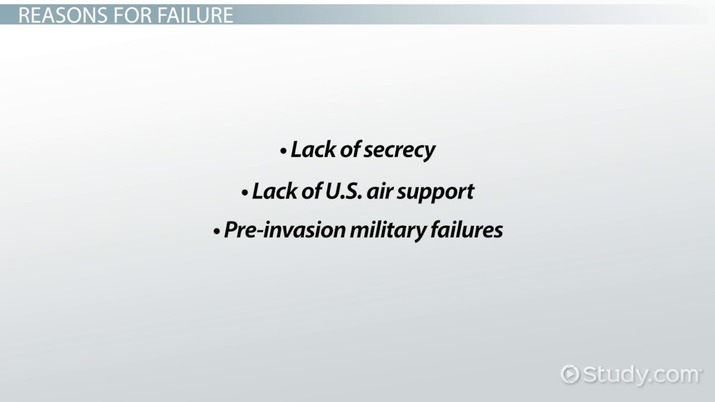 Try it now
Back
Coming up next: Sputnik 1 Satellite: Definition, Facts & Launch

When Fidel Castro established his communist regime in Cuba in 1958, he cut diplomatic ties with the United States. Due to the close geographic proximity of Cuba to the United States, the U.S. President Dwight D. Eisenhower ordered the Central Intelligence Agency (CIA) to make a plan to overthrow Castro. The nation of Cuba is only 100 miles off the coast of Florida, and Eisenhower did not want a communist ally so close to U.S. borders. Eisenhower designated $13.1 million to the CIA to solve the problem. The CIA began recruiting and training Cuban exiles living around Miami, Florida who had been forced out of Cuba by Castro. This group of revolutionaries were known as Brigade 2506, and eventually had close to 2,000 trained soldiers. All of these preparations were done in secret to ensure the United States government had "plausible deniability" as to their involvement. The U.S. could not be seen as directly controlling or invading a sovereign nation, so the CIA specifically chose to have Cuban exiles as the revolutionaries to convince the world that the Cuban people did not support Castro's communist regime. On April 17, 1961, President John F. Kennedy ordered Brigade 2506 with Naval and Air support from the United States to begin the invasion on a beach in the Bay of Pigs. While the revolutionaries initially won a few skirmishes against the Cuban militia, their progress soon halted. The success of the invasion plan depended upon air support from the United States, however President John F. Kennedy never sent the necessary air support. Despite all of the efforts of the U.S. government to keep their involvement secret, the USSR promised nuclear retribution if the U.S. aided the invasion any further. Kennedy was forced to withdraw air support, which cut off all supplies to Brigade 2506. Only three days later on April 20, 1961, the Bay of Pigs Invasion ended in failure with all of Brigade 2506 captured or killed, the majority imprisoned in Cuba.

What was the Outcome of the Bay of Pigs Invasion?

The Bay of Pigs Invasion was an international relations disaster for the United States. Fidel Castro not only remained in power, but because of the military involvement of the United States, he more closely aligned himself with the USSR and became more communist. This relationship between Castro and the USSR is what eventually led to the Cuban Missile Crisis in 1962, when the USSR attempted to place nuclear missiles in Cuba pointed towards the U.S. In addition, the United States lost some credibility by actively supporting an invasion on a sovereign country.

The most significant impact of the Bay of Pigs Invasion were the repercussions for the United States and their allies internationally. The involvement of the U.S. in Cuba pushed Castro to a stronger relationship with USSR, and strengthened his communist regime in Cuba that continues to today. In turn, the USSR gained a close ally within striking distance of the United States, easily threatening the United States with nuclear weapons. This eventually led to the Cuban Missile Crisis, when the USSR built nuclear missile launch sites in Cuba directed towards the United States.

Why was the Bay of Pigs invasion a failure?

The Bay of Pigs was a failure because it left Fidel Castro in power. It also strengthened communism in Cuba, and Cuba's relationship with the USSR.

What happened at the Bay of Pigs invasion?

At the Bay of Pigs Invasion, just under 2,000 Cuban revolutionaries trained and supported by the U.S. Central Intelligence Agency invaded Cuba in an attempt to overthrow Fidel Castro and his socialist regime. The invasion was an international relations failure for the United States, and further strained U.S. and USSR relations in the Cold War.

What was Kennedy's role in the Bay of Pigs invasion?

What was the Bay of Pigs invasion, and what was its result?

The Bay of Pigs invasion was a military invasion of Cuba by Cuban exiles trained by the United States CIA in an attempt to overthrow the socialist government of Fidel Castro in Cuba. The invasion failed in overthrowing Castro, and strengthened Cuba's ties to the USSR and communism.

Why was the Bay of Pigs invasion important?

The Bay of Pigs was important because it strengthened the ties between Fidel Castro in Cuba and the Soviet Union. This increased tensions between the U.S. and the USSR, and opening communism in the West.

Try it now
Back
Create an account
Bay of Pigs Invasion History & Significance | What Happened at the Bay of Pigs?
Start today. Try it now
AP World History: Help and Review

Bay of Pigs Invasion History & Significance | What Happened at the Bay of Pigs?
Related Study Materials