Atomic number refers to the number of protons in the nucleus of a single atom of an element. Protons are one of the three types of subatomic particles, the other types being neutrons and electrons. Beryllium atoms are also found to possess 4 electrons and 5 neutrons in their atoms. The atomic mass of this element (i.e., the total number of protons and neutrons) is 9.

The following sections will describe the key properties and uses of this element, as well as explore some beryllium facts in greater detail. 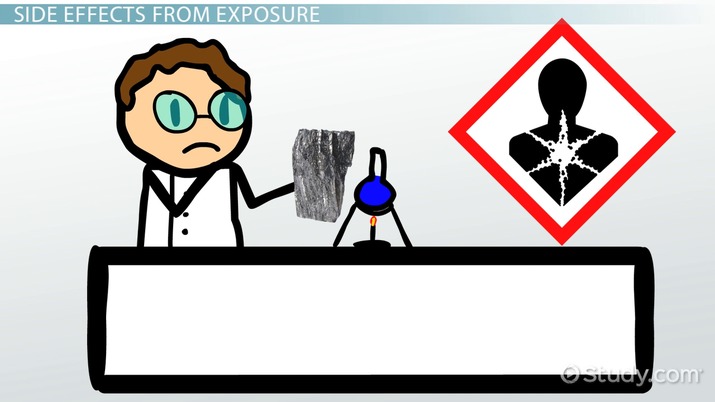 Coming up next: The Kinetic Molecular Theory: Properties of Solids and Liquids

Beryllium on the Periodic Table

Who discovered beryllium and when was this element discovered? Beryllium was discovered by a French chemist named Nicolas-Louis Vauquelin in the year 1798. Vauquelin discovered this element in the minerals beryl and emerald, which are well known for their use as gemstones since ancient times.

The first successful isolation of this element would only occur a few decades later in the year 1828 by German chemist Friedrich Wohler and French chemist Antoine A.B. Bussy. These scientists were able to extract pure beryllium from the compound beryllium chloride, by performing a reduction reaction using the element potassium.

When Vauquelin first discovered this element, he proposed the name 'glaucinium', which was derived from the greek word "glykys" (meaning sweet). This name was given in reference to the sweet taste of some beryllium compounds. However, many in the scientific community preferred the name beryllium, after the mineral the element was discovered in (beryl).

The key characteristics of Beryllium can be divided into three categories:

The atomic characteristics of Beryllium include:

The physical characteristics of beryllium are described based on pure beryllium at standard conditions:

Some important chemical reactions that beryllium undergoes include the following:

What is beryllium used for? The following details the major industrial uses of beryllium:

Where is beryllium found? Beryllium occurs naturally in nearly 100 different minerals and gemstones. The major minerals used to commercially extract this element are bertrandite and beryl, both of which contain only a few percent of this element by mass. The United States of America is the largest commercial producer of this element in the world, responsible for nearly 60% of global production.

Beryllium is a very toxic metal. It has been found to increase the likelihood of DNA damage and cancer. It is also particularly harmful when it is inhaled and exposed to the lungs. The two primary disease associated with beryllium toxicity are acute beryllium disease, and chronic beryllium disease.

Beryllium exposure over a long period of time can trigger another type of lung disorder called Chronic beryllium disease, or berylliosis. Berylliosis is a disease that is characterized by inflammation of the lungs. Inflammation, in the long term, can trigger the formation of a type of scar tissue called granulomas. Scarring of the lungs impairs the lungs' ability to function normally, which can cause fatigue, shortness of breath and death in severe cases. Although there is no known treatment for berylliosis, its symptoms can be managed to provide relief to patients. People exposed to beryllium in their work environments are at the highest risk of developing berylliosis.

Beryllium is a chemical element with an atomic number of 4, represented by the symbol Be on the periodic table. It is found in period 2 of group 2 of the periodic table, which is also known as the alkaline earth metal group. Beryllium was discovered by chemist Nicolas-Louis Vauquelin in 1798, and was first extracted in its pure elemental state by chemists Friedrich Wohler and Antoine A.B. Bussy in 1828. This element was named after the mineral beryl, in which it was first discovered. The properties of this element include:

The popular uses of this element include in x-rays, nuclear reactors, and in the production of metal alloys with improved properties such as toughness and light weight. Alloys containing beryllium are used in a wide range of applications, such as aircrafts, satellites, gyroscopes, etc. This element is naturally found in a wide range of minerals and some gemstones. Beryllium and its compounds are considered highly toxic to humans and exposure can lead to acute beryllium disease or chronic beryllium disease, depending on the duration of exposure.

Is beryllium be a metal or nonmetal?

What are chemical properties of beryllium?

The key chemical properties of beryllium include its ability to readily form oxides when exposed to air. The thin oxide layer prevents further tarnishing of beryllium metal in air. Beryllium also reacts with most acids except nitric acid.

What is the element beryllium used for?

Where do you find beryllium?

Beryllium is found in period 2 of group 2 of the periodic table. In nature, it can be found in over 100 different types of minerals and gemstones.

Fluorine Element Properties & Facts | What Is Fluorine Used For?

Net Force Formula & Examples | What is Net Force? | How to Find Net Force