What is Beta Oxidation?

Eating good food is one of the simple pleasures in life. A piece of decadent chocolate cake, a perfectly cooked steak, or a slice of freshly baked bread can add a touch of extravagance to an otherwise ordinary day. However, food is not eaten simply for enjoyment. Humans and all other living organisms need to ingest food to make energy.

Living organisms consume or produce energy-storing molecules including carbohydrates, proteins, and fats. These molecules are subsequently broken down when energy levels are low. Carbohydrates, proteins, and fats each have specific processes to carry out their digestion. This lesson will focus on beta-oxidation, the catabolic process which breaks down fatty acids molecules to harvest ATP.

Beta-oxidation occurs in both prokaryotes and eukaryotes. In prokaryotes, fatty acids are broken down in the cytosol. In eukaryotes, beta-oxidation occurs in both mitochondria and peroxisomes. Through the reactions in beta-oxidation, acetyl-CoA, NADH, H+, and FADH2 are produced. NADH and FADH2 are coenzymes that transport electrons to the electron transport chain to produce ATP. The acetyl-CoA enters the citric acid cycle, where it is oxidized to harvest even more energy. The rest of this lesson will explore the location, steps, and products of beta-oxidation more in-depth. 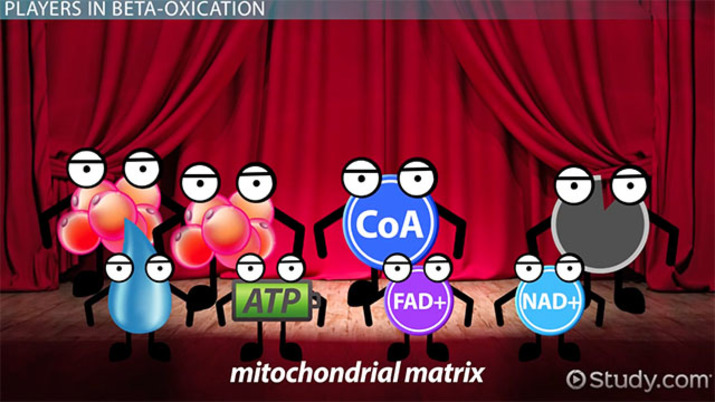 Coming up next: What are Thyroid Peroxidase (tpo) Antibodies?

Where does Beta Oxidation Occur?

Prokaryotes are single-celled organisms that lack membrane-bound organelles. Bacteria and archaea are examples of prokaryotic organisms. Because prokaryotes do not have organelles, all of their reactions occur in the cytosol, including beta-oxidation. Fatty acids are transported across the plasma membrane into the cytosol and modified to form fatty acyl-CoAs by the addition of coenzyme A (CoA). This modification allows for the cytosolic enzymes involved in beta-oxidation to identify the fatty acids and begin the cyclic process of breaking them down.

Now that we have discussed the location of and preparatory steps for beta-oxidation, let us now look at the actual process of beta-oxidation. In both prokaryotes and eukaryotes, a round of beta-oxidation consists of four reactions. Briefly, the steps are as follows:

1. Dehydrogenation - oxidation of the acyl-CoA via the removal of two hydrogen atoms

2. Hydration - addition of a water molecule and formation of a hydroxyl (OH) group

3. Oxidation - oxidation of the hydroxyl group via the removal of two hydrogen atoms

4. Thiolysis - cleavage to release an acetyl-CoA

As each round of beta-oxidation produces a two-carbon acetyl-CoA, it takes several rounds to completely break down a fatty acid. Given this, it is useful to think of beta-oxidation as a cycle. The cycle continues until a four or five-carbon fatty acyl-CoA remains. Let us look at each of these steps in a little more detail.

In the first step of the beta-oxidation cycle, the acyl-CoA is oxidized to form trans-delta 2-Enoyl-CoA. This reaction is carried out by Acyl-CoA-Dehydrogenase and results in the formation of a double bond between C2 and C3 (the second and third carbons). The C2 carbon is also referred to as the alpha carbon and the C3 carbon is known as the beta carbon, hence the process being named beta-oxidation. The coenzyme FAD accepts two electrons and two hydrogen atoms during the oxidation of acyl-CoA and is converted to FADH2. The FADH2 then transports the electrons and hydrogens to the electron transport chain.

In the second step of beta-oxidation, a water molecule attacks the double bond that was formed in the first step. This results in the addition of a hydroxyl (OH) group to C3 (the beta carbon). The other hydrogen from the water molecule binds to C2, leading to the double bond between C2 and C3 being converted into a single bond. The enzyme Enoyl-CoA-Hydratase facilitates this reaction and leads to the formation of L-3-Hydroxyacyl-CoA.

The third step of beta-oxidation results in the conversion of L-3-Hydroxyacyl-CoA to 3-Ketoacyl-CoA. This reaction is catalyzed by Hydroxyacyl-CoA-Dehydrogenase. The coenzyme NAD+ oxidizes the hydroxyl group by removing two electrons and a hydrogen to form NADH. An additional hydrogen atom is removed to form a double bond between C3 and O. Similar to the FADH2 from the first step, NADH and H+ go to the electron transport chain to fuel energy production.

Beta-oxidation is a four-step process, which repeats until the fatty acid has been completely broken down. The four steps are dehydrogenation, hydration, oxidation, and thiolysis. Dehydrogenation is catalyzed by Acyl-CoA-dehydrogenase and coverts FAD to FADH2 to form a double bond between C2 and C3. Hydration results in a hydroxyl group on C3 as a result of the double bond being attacked by a water molecule. This reaction is catalyzed by Enoyl-CoA-Hydrase. Oxidation converts the hydroxyl group to a carbonyl group via the formation of NADH and H+ from NAD+. This step is catalyzed by Hydroxylacyl-CoA-Dehydrogenase. Thiolysis cleaves off an acetyl-CoA molecule and replaces the CoA to form an acyl-CoA that is two carbons shorter than the one that entered the process.

Each round of beta-oxidation can be summed up using the following equation:

What are the products of beta oxidation?

What are the steps of beta oxidation?

There are four steps in beta-oxidation: dehydrogenation, hydration, oxidation, and thiolysis. Dehydrogenation results in a double bond between C2 and C3 and produces FADH2. Hydration results in a hydroxyl group at C3. Oxidation converts the hydroxyl group to a carbonyl group and produces NADH and H+. Thiolysis cleaves the C2-C3 bond via SH-CoA, releasing an acetyl-CoA and forming another acyl-CoA, which can enter beta-oxidation again.

Holoenzyme Functions & Examples | What is Holoenzyme?

Lipids Function, Facts & Importance | What do Lipids do for the Body?