Every day, people across the world use a numeral system known as the base ten system. Another name for this numeral system is the decimal system, and in it, the digits 0-9 make up numbers that are used to perform all sorts of accounting and calculations.

But there are many other numeral systems out there in common use, including one being used by the computer or mobile phone that this text is being displayed on right now: the binary system.

The binary system is also known as the base two numeral system. It uses only two digits, 0 and 1, but it can represent every number that the decimal system can. Other names for the binary system, depending on the industry it is being used in or its general application, are the on-off system, the go-no go system, or the open-closed system. Any system of measurement that records a pass/fail state or a yes/no state is essentially a binary system in its most basic form.

The oldest recorded use of binary numeral systems were Horus-Eye fractions used as far back as 2400 BCE in the Fifth Dynasty of Egypt, with further evidence of their use in hieroglyphs from 1200 BCE. These were used for measuring fractions of liquid and grain.

Sometime in the 2nd century BCE, Indian scholars developed a binary system for describing the rhythms found within poetry. Short and long syllables were used to represent structure in a similar manner to Morse code.

The Enlightenment saw an increase in interest towards numeral systems and numbers, with researchers and mathematicians like Thomas Harriot and Francis Bacon experimenting with binary systems in some of their work during the 17th century. However, these were not very formalized works.

Gottfried Leibniz finally published a paper in the early 18th century titled "Explanation of Binary Arithmetic," detailing his findings on binary numbers after intense study of the Chinese I Ching. Later, George Boole would develop Boolean algebra, leading to a name commonly given to true/false variables and values in computer science (Boolean variables and types). 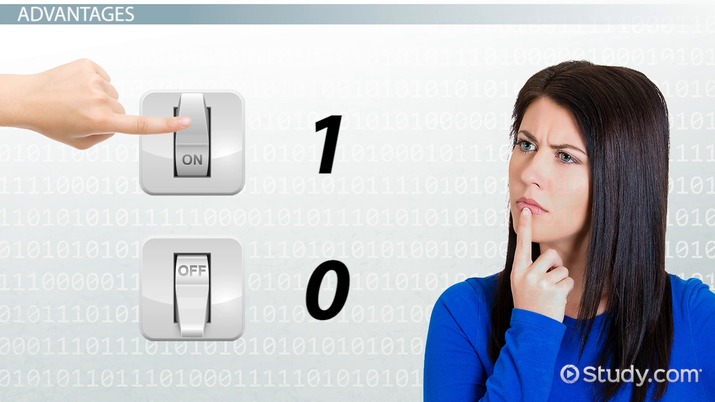 Coming up next: What is the Binary Number System? - Definition & History

The binary number system is also known as the base two system due to each position in a numeral representing a power of 2. This is like how the decimal system (or base ten system) has positions that determine values measured in powers of 10. This is perhaps best illustrated with an example of several binary numerals and the math used to calculate their values:

Note how each position is worth a certain value, just like in the decimal system, and when a 1 is present as a digit that value is added to the total of the binary value.

And like all other number systems, the binary system also has basic arithmetic operations that can be performed in it.

Addition in binary is like addition in decimal, except there are only two digits to work with. For example, adding the binary numbers 100111 and 1110:

Division in binary is similar to long division in decimal, as well:

This process repeats, with the dividend's next digit not being divisible, but the one after being divisible. Finally, the result of 001101 (or just the simplified 1101) is found with no remainder.

What Is the Advantage of the Binary System?

With so few digits to choose from as well as every number's divisibility by two being expedited by the structure of the numerals, the binary system has some advantages to it compared to other numeral systems:

Binary is a simple system, and that's what makes it powerful.

The most common application of the binary system is in computer science and electrical engineering. The logic gates of the electrical engineering field are all based on on/off states or high/low voltage states, and computers are constructed from electrical circuits. Information theory and subsequently computer science naturally evolved to make use of binary data storage and calculation methods due to the underlying hardware being constructed in a binary manner.

Daily activities take advantage of binary systems of communications, too. Giving someone a thumbs-up or a thumbs-down is often a faster method of communicating information when in a noisy area or across long distances, where trying to make sense of words and sentences might be difficult and where simple information needs to be accurately transmitted.

The binary system is also known as the base two numeral system. It uses only two digits, 0 and 1. It is most commonly used today in electrical engineering and computer science, and is incredibly effective at reducing errors in data storage and transmission. It features the ability to quickly calculate values due to its limited algebraic computation count owing to its small number of digits.

Converting Numbers from Binary to Decimal

Converting Numbers from Decimal to Binary

What is an example of a binary system?

The binary numeral system is commonly used in computers because computers are composed of many electrical switches, which operate in two states: on and off. Due to the nature of electrical circuits operating in a binary way, binary numerals were an easy choice for how to represent numbers in low-level computer programs and hardware.

What is the binary system and how does it work?

What is binary system in computer?

The binary system is used by low-level computer components to store and transmit data and to perform calculations based on on-off electrical signals or high-low voltage levels. It is also a system of digital representation of numbers and data stored by computer programs, and more generally a numeral system based around two digits (0 and 1).

How to Format Text in PowerPoint: Bullets, Numbered Lists and Hyperlinks

Computer Bits & Bytes Measurements | What Is a Byte?

What Is a Karnaugh Map? - Definition & Examples

How to Create a PowerPoint Presentation Using a Template

What is a Base Number?

Measuring Scale | How to Read Measurements on a Scale

How to Simplify & Combine Logic Circuits

How to Organize Classroom Materials