Copyright
Travis Hartin, Cathryn Jackson
Learn what bivariate data is. See a comparison of univariate vs. bivariate. Understand what a bivariate analysis is. Updated: 12/13/2021

What is Bivariate Data?

In a scientific study, researchers collect information about their variables of interest in the form of data. The data that is collected can be univariate or bivariate, depending on the nature of the study.

Univariate data is often used to understand the characteristics of a population, such as central tendency and variability. It can also be used to describe the basic findings of an experiment, such as reporting the mean and standard deviation for individual variables. 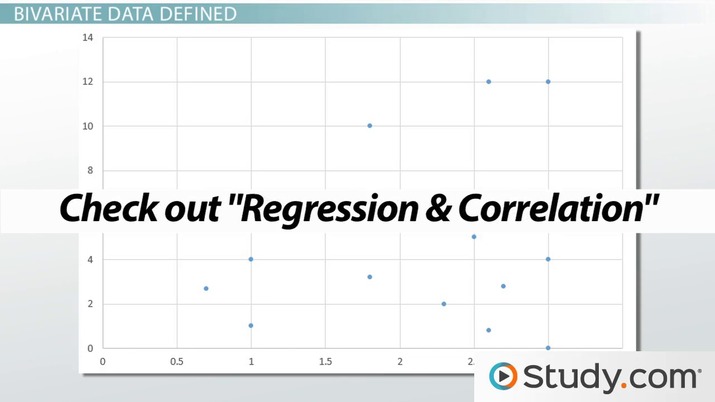 Coming up next: What is a Two-Way Table?

For example, a researcher is interested in whether or not students' attitudes toward a statistics class change based on the time of the class. To answer this question, the research measures students' attitudes from a morning class and an evening class. The researcher finds that students in the evening class have a more positive attitude toward statistics than students in the morning class.

Now, take a moment to look at a few bivariate data examples.

Figure 1 shows the results of a study that measured anxiety levels and feelings of loneliness.

Figure 2 shows the results of a study that compared the amount of time students spent studying and their exam grades.

Figure 3 is a graphical representation of bivariate data. It shows the relationship between age and vocabulary scores in a sample of preschoolers. We will return to the idea of graphing bivariate data later.

What is a Bivariate Analysis?

Data analysis is the process of organizing, describing, and evaluating data in order to look for information that might help researchers make conclusions about various phenomena. It is used to help determine whether a particular research finding represents a real-world quality or some type of statistical fluke or error.

Types of Analysis for Bivariate Data

There are different bivariate data analyses.

A scatter plot is a graph used to show the values associated with two variables. As an example, take a moment to look at the graph from a previous example:

Take a moment to examine the following example for how to create a scatter plot.

Imagine you are interested in whether or not running influences how much people sleep. To answer this question, you have people run as many laps as they can and then record how many hours they sleep the following night. You obtained the following data:

Let's graph this data on a scatter plot one data point at a time. Each participant will be represented on the graph in accord to where X (i.e., laps ran) and Y (i.e., hours slept) intercept. First, plot the point where X=2 and Y=4 meet on the graph.

Then, plot the point where X=3 and Y=5 meet on the graph.

Finally, plot the point where X=5 and Y=7 meet on the graph.

A correlation analysis is a statistical test used to determine whether or not two variables are related. It does this by comparing scores on two different measures to tell if changes in one influence changes in the other. Variables can be correlated in one of two ways:

A very common saying in statistics and research methodology courses is correlation does not equal causation. Correlation analysis can only indicate whether or not two variables are related. To understand why, consider the two previous examples:

A scatter plot is often used to graph correlational data. For example:

Figure 10 is an example of a positive correlation. You can tell by the general direction of the data. Scores on the y-axis increase as scores on the x-axis increase. This creates a slope that is moving upwards.

Figure 11 is an example of a negative correlation. Notice the general direction of the data in this graph. Scores on the y-axis decrease as scores on the x-axis increase. This creates a slope that is moving downward.

Figure 12 is an example of what a scatterplot looks like when two variables are not correlated. Notice that there is no discernable increasing or decreasing pattern in the data. The data looks randomly scattered on the graph.

Regression analysis is a statistical test used to determine if one variable can predict the outcome of another variable. It does this by determining whether or not scores from one type of measure reliably correspond to scores from another measure. For example, scores from various standardized tests (e.g., ACT) can be used to predict other measures of academic achievement (e.g., GPA). In fact, this is one reason why various academic programs often require students to take one of these tests prior to admission. Scoring high enough on these tests is considered an indicator that a student can succeed in an academic setting.

Researchers collect data as a way to learn more about various real-world phenomena. Data analysis often involves univariate and bivariate analyses depending on the goal of the researcher. Univariate data involves analyzing a single variable and is often used to describe samples and populations. For example, researchers often report the mean and standard deviation for individual variables as a general description of the participants in a study. Bivariate data involves analyzing two separate variables and is used to determine whether or not two variables are related.

There are different methods of bivariate data analysis. A scatter plot is a graphical representation of bivariate data that illustrates the relationship between two variables on an x and y-axis. A correlation analysis is used to determine whether or not two variables are associated. Scatter plots and correlational analyses are often used in conjunction to interpret whether a correlation is positive or negative. Regression analysis is when one variable is used to predict the outcome of another variable.

What does bivariate mean in statistics?

"Bi" means two and "variate" is another word for a variable. So, bivariate refers to a statistical analysis that involves the comparison of two separate variables.

What is bivariate data analysis?

Bivariate data analysis is a statistical test that involves two separate variables. It is used to determine whether or not two variables are related.

What are the uses of bivariate data?

What is an example of bivariate data?

An example of bivariate data is data collected from a study that compares levels of anxiety to the number of times participants pace back and forth in a room.

Slopes and Rate of Change

How to Calculate Percent Increase with Relative & Cumulative Frequency Tables

Investment Opportunities in Stocks and Bonds

What is the Trapezoid Rule?