The circulatory system in living organisms, including humans and other animals, is essential for the transport of blood throughout the body. As blood travels through the body, important substances such as gases, nutrients, and other organic molecules are also carried to different parts of the body.

In order to carry out these important functions, the circulatory system is comprised of a network of blood vessels, including arteries, veins, and capillaries:

As mentioned earlier, arteries are the largest blood vessels in the human body. The main function of the arteries is to transport oxygenated blood, nutrients, and other molecules to different parts of the body. Due to the large size of arteries, blood traveling through these blood vessels must be kept at a constant pressure.

To maintain high pressure within these blood vessels, arteries need to be both strong and flexible. This allows arteries to contract and expand as needed in order to control blood flow and blood pressure. As a result, arteries consist of three layers of tissues. These layers of artery include the tunica intima, tunica media, and tunica externa.

Veins are the other main type of blood vessel possessing three layers of tissue. The main function of veins is to carry waste products and deoxygenated blood away from tissues and organs. Veins help to eliminate waste products from the body and return deoxygenated blood back to the heart for re-oxygenation. As with arteries, the three tissue layers of veins include the tunica intima, tunica media, and tunica externa. 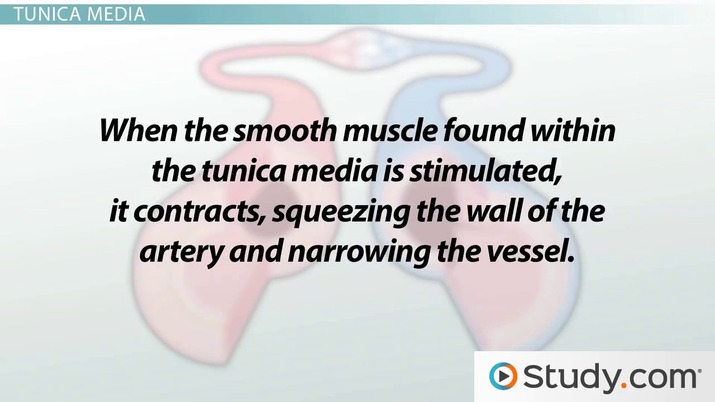 Try it now
Back
Coming up next: What are Arteries? - Function & Definition

The tunica media function possesses a strong correlation with its structure. As previously mentioned, the structure of the tunica media is comprised largely of smooth muscle fibers, elastic fibers, and connective tissues, which form ring-like structures around blood vessels. These ring-like structures are responsible for changing the diameters of arteries and veins. Changes in the diameters of the blood vessels largely control the pressure with which blood flows through the body.

For example, vasoconstriction represents a narrowing of a blood vessel due to the contraction of the smooth muscle fibers in the tunica media. By contrast, vasodilation occurs when these muscle fibers relax and the blood vessels become wider. As suggested by these two processes, the main function of the tunica media is to control the flow of blood and blood pressure within the body.

Because the tunica externa is largely comprised of tough connective tissue, the main function of this layer is to protect the blood vessels from damage. In veins, where this layer is much thicker, the primary purpose of the tunica externa is to prevent vein wall collapse. This is especially important in veins, as the blood pressure is much lower here than in the arteries.

In both arteries and veins, the tunica externa also provides the blood vessels with their characteristic shape and structure. This flexible, yet strong, external structure allows blood vessels to effectively carry out the processes of gas and nutrient transport throughout the body.

The circulatory system consists of three main types of blood vessels: arteries, veins, and capillaries. Arteries are responsible for carrying oxygenated blood, nutrients, and other molecules to organs and tissues throughout the body. By contrast, veins help the body to remove waste products from the body and carry deoxygenated blood back to the heart for re-oxygenation. Arteries and veins possess a structure that is characterized by the presence of three tissue layers: the tunica intima, the tunica media, and the tunica externa.

The tunica intima is the innermost layer of arteries and veins and represents a tissue layer found in all parts of the circulatory system. In the capillaries, the tunica intima is also responsible for the exchange of gases and nutrients between the blood and surrounding tissues. The tunica media is the middle layer of tissue that contains the smooth muscle fibers responsible for vasoconstriction, or vessel constriction, in arteries. The tunica adventitia constitutes the outermost layer of connective tissues, and it provides the shape, strength, and support for arteries and veins.

What type of tissue is tunica externa?

The tunica externa is comprised of connective tissue fibers. These fibers are responsible for providing the structure and shape of blood vessels.

What are the 3 layers of a vein?

Veins consist of three tissue layers, much like arteries. These layers are the tunica intima, the tunica media, and the tunic externa.

Where is the tunica media?

The tunica media is the middle layer of tissue found in blood vessels. It is comprised of smooth muscle fibers that help to constrict, or narrow the width of, blood vessels.

What is the difference between tunica media and intima?

What is the composition and function of tunica intima?

The tunica intima consists of a single layer of endothelial cells. In the capillaries, the main function of the tunica intima is to allow for the exchange of gases and nutrients.

Endocardium Overview, Parts & Function | What is the Endocardium?