Christine Liddell, Sujata Archer
Learn what blowflies are. Understand how blowflies are born. Learn about the complete life cycle of blowflies. Know some interesting facts about blowflies. Updated: 12/08/2021

What is a blowfly? Blowflies, also known as bluebottles, greenbottles, or screwworms, are part of the Calliphoridae family of the Diptera order, or insects with two wings. Blowflies are similar to house flies, but they are larger. Blowflies can be green, blue, copper, or purple in color. Blowflies thrive in warm, humid weather and do not do well in windy, extremely dry, extremely hot, or cold weather.

Blowfly larvae are also known as maggots. The term applies to footless larvae of Diptera. Blowfly adults, however, are usually shiny and metallic-looking. The area between the head and the abdomen, or thorax, which bears the legs and wings, along with the abdomen, is usually colored blue, green, or black. Blowflies have antennae containing three segments with a shiny, bristly tip. All three of the antennae segments are feathery, or plumose, and the second segment is grooved. Blowflies have well-developed calypters, which are small membranous flaps or lobes that are located at the base of the wing. Blowflies can be distinguished from other members of the Calliphoridae family by the characteristics and arrangements of hairlike bristles. All blowflies have bristles located on the meron or a hard body part on the side of an insect's thorax. Blowflies feed off of cadavers and live in wounds or openings, such as the eyes and nose.

In the 1950s and 1960s, one to three percent of sheep were affected by myiasis or blowfly strike. This occurs when blowflies invade the sheep's living tissue by laying eggs, such as in a wound, causing skin and muscle damage. Myiasis could cause death in sheep. Signs a sheep had myiasis included different grazing patterns and subsequent rapid weight loss. The United States Department of Agriculture (USDA) solved the problem by eradicating the screwworm by introducing sterile male screwworms into the population, thus not allowing for reproduction. Blowflies do have some positive uses, however. Blowflies, particularly greenbottles, are used in maggot debridement therapy, or MDT. This treatment is used for diabetics who have wounds that do not heal. The maggot enters the wound and changes the pH, preventing bacterial growth. Blowflies also help solve crimes. Forensic entomologists calculate the time since blowfly eggs are first laid in a dead body since blowflies feed off of cadavers. Scientists take a sample from the cadaver to determine the species and stage of growth, using the life cycle of a blowfly. The insect-derived time of the murder is known as minimum post-mortem interval (PMImin). Although blowflies are most commonly used, forensic entomology can also use insects, arachnids, centipedes, millipedes, and crustaceans to determine not just the time of death, but also the presence of drugs or poisons, the location of an incident, or the time of wound infliction. Forensic entomology can be divided into three subcategories: urban, stored-product, and medico-legal or medico-criminal entomology. 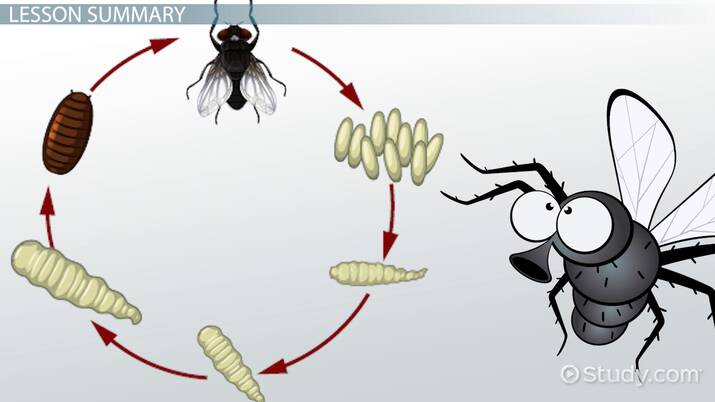 The blowfly life cycle consists of six parts and describes how flies are born. The life cycle begins when a female blowfly lays eggs in the wound or opening of a cadaver. One female can lay 250-350 eggs. Eggs are primarily laid in winter, although blowflies thrive in humidity. Within 24 hours, the eggs hatch and are now known as maggots or first-stage larvae. After feeding and molting, the maggots become known as second-stage larvae. After another feeding and molting cycle, the maggots are now third-stage larvae. After the third larval stage, they become known as pupae. The sixth and final stage is adulthood. It takes two to three weeks for the life cycle to be completed. The life cycle begins again after the blowflies become adults.

Blowfly eggs hatch within twenty-four to forty-eight hours after being laid. Blowflies eggs are whitish in color and go from one to two millimeters in length initially to one centimeter by day three or four.

Blowfly larvae are known as maggots until the fifth stage of the life cycle when they become pupae. The larvae initially feed on fluid exuded from the body in which they live because the maggots have an enzyme that can break down proteins. In the pre-pupae stage, the larvae move away from the body they've been inhabiting and into the nearby soil. In the pupa stage, the pupae live inside their own hardened last larval skin. After the pupa stage, the blowflies are adults that seek to mate. The adult feeds on protein from body fluids and lays eggs on a corpse, thus beginning the whole life cycle anew.

The black blowfly, also known as Phormia Regina, belongs to the blowfly family Calliphoridae and was first described by Johann Wilhelm Meigen, a German entomologist specializing in the order Diptera. He described the black blowfly as having specialized wings with a sharp bend and well-developed calypters. Key characteristics of this species include black gena, the area below the insect's compound eyes, mostly white calypters, and anterior thoracic spiracles, which allow air into the trachea. The spiracles appear to be orange-yellow due to being surrounded by bright orange bristles known as setae.

Blowflies, also known as bluebottles, greenbottles, or screwworms, are part of the Calliphoridae family of the Diptera order, or insects with two wings. The blowfly life cycle describes how flies are born and consists of six parts. It begins with a female blowfly laying eggs in a cadaver or wound. After three larval stages, the blowflies are known as pupa. Pupa live outside of the cadaver and in soil. The sixth and final stage ends with adult blowflies. Blowflies, screwworms in particular, harm sheep through myiasis, or blowfly strike, by invading living tissue and living in a wound on the sheep's body.

The USDA eradicated screwworms in the 1950s by introducing sterile male screwworms into the population. Blowflies do have some benefits, however. Blowflies help forensic entomologists determine the time of the murder, thereby helping to solve crimes. Blowflies also help diabetic's wounds heal through maggot debridement therapy, or MDT.

How long is the life cycle of a blowfly?

The life cycle of a blowfly lasts about two to three weeks. The cycle begins with a female blowfly laying eggs and ends with an adult blowfly looking to mate.

What are the 6 stages of a blowfly life cycle?

What do blowfly larvae eat?

Blowfly larvae, or maggots, have enzymes that can break down protein. These enzymes allow them to consume semi-liquid material from a carcus.

Pallor Mortis & Algor Mortis | What Happens When We Die?