The Boiling Point of Water

The boiling point of a liquid can change based on several factors, including altitude, air pressure, or the presence of other constituents in the liquid (such as salt or sugar). When heating up water the temperature of the water continues to rise, but remains a liquid until it reaches a critical point. At this boiling point, a few things begin to happen:

What is the Boiling Point of Water at Sea Level? 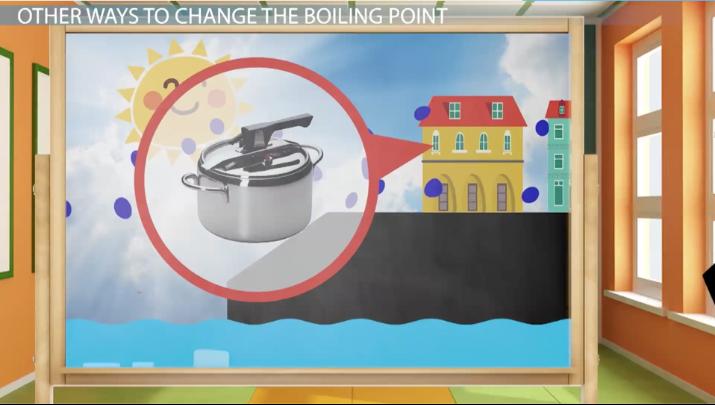 Try it now
Back
Coming up next: The Kinetic Molecular Theory: Properties of Gases

However, it is important to know how to calculate the boiling point of a liquid at different pressures and altitudes as well.

How to Calculate Boiling Point of Water at Different Pressures

The following formula can be used in order to calculate the boiling point of water at different pressures:

In this formula, pressure is in pascals (Pa) and temperature is in Kelvin (K). Let's start with finding the boiling point of water if the air pressure is 245,675 Pa. We substitute the known air pressure value into the formula:

And solve for boiling point:

This can then be converted into degrees Celsius by subtracting 273.15:

Now let's look at another example, where a business wants to use steam from water for energy. They know that they need the temperature to be 254 degrees Fahrenheit to achieve the desired results. What pressure would the system need to be under to reach this temperature?

In this case the same equation is used, but we need to solve for pressure instead of boiling point. First, 254 degrees Fahrenheit needs to be converted into Kelvin. To convert from Fahrenheit to Kelvin we use to following formula:

Substitute the known temperature value of 254 degrees Fahrenheit into this formula:

Solving the equation results in a temperature value of 396.5 Kelvin. This value can now be used for boiling point in the logarithmic equation to solve for air pressure:

How to Calculate Boiling Point of Water at Different Altitudes

Inputting each of these numbers the equation (using pascals for pressure) is now:

So, for an elevation of 1500 meters, the air pressure can be calculated as follows:

This pressure can then be substituted into the formula for finding boiling point at a specific pressure:

Solving for boiling point at 1500 meter elevation results in a temperature value of 368 K, or 94.9 Celsius.

How to Calculate Boiling Point of Water with Added Constituents

Whenever a substance is added to water, it will increase the boiling point of the water. This includes substances such as sugar and salt. In order to calculate the new boiling point, a couple of pieces of information are required:

The equation to calculate the change in temperature is:

Where 'm' is the molality, and 'i' is the number of particles formed.

Let's take a look at 'i' first. For covalent compounds this number is always 1, because covalent compounds do not break apart into smaller parts when dissolved in water. Since sugar is a covalent compound, 'i' for sugar is 1. For ionic compounds, 'i' is the number of ions in the compound, which means the chemical formula is needed. The following examples show how to find 'i' for various substances:

In order to calculate molality we need to use stoichiometry, which requires the following information:

The chemical formula for calcium chloride is {eq}CaCl_2 {/eq} which means 'i' is equal to 3.

Now that all pieces of required information have been found, the change in boiling point can be determined as follows:

The boiling point of water can change based on the following factors:

Boiling point is when water has reached a critical point, which means:

To calculate the boiling point with different air pressures use the following formula:

With pressure in Pascals and boiling point in Kelvin.

To calculate the air pressure at a specific elevation use the following formula:

Where 'h' is the height in meters, and the pressure is in Pascals.

Boiling point changes when substances are added to water. The formula to find the change in boiling point (in degrees Celsius) is:

Where 'm' is the molality of the solution and 'i' is the number of particles the compound dissolves into when it dissolves in the water.

How do you find the boiling point of water at different elevations?

Does pressure affect the boiling point of water?