What are bone cells? These cells are the ones in the body that contribute to the growth, structure, maintenance, and function of the bone tissue. These cells collectively comprise less than 2 percent of the bone mass. However, they are very important to the function of bones.

Bone cells vary greatly in their structure and function. A bone cell can be mono-nucleated or multi-nucleated. The shape of the bone cells can also vary. They can be flat, round, cubical and columnar, stellar, or pancake-like in shape. The bone cells most commonly found in the bone tissue generally have protoplasmic projections and lacunae or small chambers. These dendritic projections of specialized bone cells ultimately form a system of tiny canals called canaliculi.

Bones are important components of the skeletal system that provide structure and support for the body. They are generally hard due to their tough extracellular matrix. Bones function to protect the vital organs of the body and also enable the movement or locomotion of an individual. Four different types of bone cells ensure bone health by regulating the formation, growth, and maintenance of the bone tissue. These four types of cells are osteocytes, osteoclasts, osteoblasts, and bone lining cells. 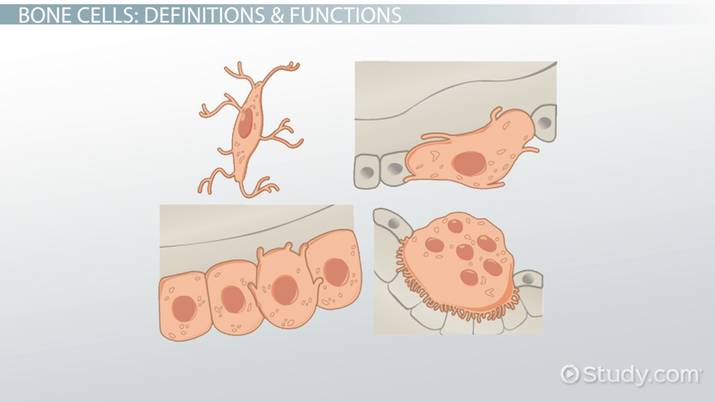 Coming up next: Anatomy of the Talus Bone

Before we dive into the four types of bone cells, we need to first learn what osteogenic cells are. These cells, sometimes called osteoprogenitor cells, are the immature cells found in deep layers of the periosteum and the bone marrow. These mono-nucleated cells appear squamous or flattened in structure and have high mitotic activity. They are undifferentiated cells that can divide by mitosis, and differentiate into specialized types of cells. Since one of the types of cells these can differentiate into are bone cells, osteogenic cells act as stem cells of the bone.

In response to stimulation, some of these bone stem cells act as precursors of osteoblasts and undergo a differentiation process to give rise to the bone-forming osteoblasts. Other osteogenic cells may turn into different types of cells altogether, such as fat cells. At a later stage, the cells that turned into osteoblasts further transform structurally to form mature types of bone cells called osteocytes.

What are the Four Types of Bone Cells?

Bones consist of four basic types of cells: osteoblasts, osteocytes, osteoclasts, and bone lining cells. Each bone cell type has a specific structure and performs unique functions. In this section, you'll learn what these bone cells do.

Osteoblasts are mono-nucleated, cube-shaped bone cells that arise from the osteogenic cells. They are commonly found in the growing periosteum and endosteum portions of the bone tissue. The membrane surrounding a bone is termed the periosteum, while the membranous vascular layer of cells lining the medullary cavity is called the endosteum. Osteoblasts, in their inactive state, resemble the flat appearance of osteogenic cells.

This type of bone cell mainly promotes the uptake of minerals such as calcium and phosphorus that are essential for bone structure. These bone cells generally secrete a matrix composed of collagen fibers and calcium-binding proteins to form the new bone tissue called osteoid. Collagen is a protein majorly found in the bone structure and needs to be secreted for the deposition of a bone matrix. As the matrix calcifies, the osteoblasts in its surroundings get trapped within the matrix itself. As a result, osteoblasts undergo structural changes and, therefore, form another type of bone cell called osteocytes. Some of them may even differentiate to form the bone lining cells.

Osteocytes are mono-nucleated mature bone cells. These cells are formed from the embedding of osteoblasts in the bone matrix. As a consequence, lacunae or small cavities are incorporated into the bone structure. They are one of the most common types of bone cells. They have protoplasmic projections along with lacunae or small chambers. The dendritic projections ultimately form a system of tiny canals called canaliculi. Osteocytes help in the maintenance of bone structure by regulating the mineral concentration of the bone matrix. The osteocytes vary in shape with respect to that of the lacunae, causing them to have an irregularity in their shapes. As osteocytes meet their end, the surrounding matrix eventually gets reabsorbed.

Osteoclasts are the multinucleated bone cells formed from the fusion of two or more hematopoietic stem cells found in the bone marrow. The hematopoietic stem cells are also responsible for the formation of macrophages. Thus, osteoclasts are sometimes called osteophages. They are bone-dissolving cells that trigger the release of bone minerals into the bloodstream when these mineral levels decline in the blood for any reason. These bone cells are usually found at sites where osteolysis or bone resorption takes place.

During bone healing, fractures, or certain diseased conditions, osteoclasts break down the extracellular matrix using enzymes. This helps evacuate the resorption bays through the surrounding tissue. Osteophages often maintain direct contact with the bone through their irregular border, which has deep infoldings of the plasma membrane. These folds increase the surface area for the activity of the enzymes, degrading injured or diseased portions of the bone. The plasma membrane infoldings of osteoclasts also close off the surface area from the bone matrix present in the cell's surroundings. In addition to this, an acid is secreted by osteoclasts to dissolve the matrix for its resorption. It is then followed by the replacement of the bone matrix with osteoblasts. Resorption and deposition of the bone matrix are usually regulated by hormones that monitor calcium levels in the blood.

The flattened cells found along the bone surfaces, where remodeling of the bone does not occur, are known as the bone lining cells. The cells that line the internal surfaces of a bone are called endosteal cells. However, the cells that are found on external surfaces are termed periosteal cells. Bone-lining cells resemble osteoblasts in appearance, and they may contain cytoplasmic extensions. They are believed to play a significant role in the maintenance of the bone matrix.

The living bone tissues in humans undergo continuous growth and changes after their formation. Several vitamins ensure normal growth, including vitamin A, C, and D. Minerals that help ensure normal bone growth are calcium, magnesium, and phosphorus. In addition, the old bone is constantly renewed by replacing inefficient or old cells of the bone with new and efficient bone cells. Different types of bone cells perform their unique function to renew old bones. Altogether, these cells help form and maintain bones, as well as repair the damaged structures of bones.

Bone remodeling is an active process that involves bone resorption and formation. The purpose of bone remodeling is to maintain the bone architecture as per the mechanical needs of the body and repair injured bones. As a result, this remodeling process ensures the prevention of the accumulation of old bone cells in the bone tissues. In resorption, the minerals from the damaged or injured part of the bone tissue get absorbed by the body. Osteoclasts trigger resorption of the bone, thereby releasing minerals such as phosphorus and calcium into the bloodstream to maintain homeostasis. Bone resorption may normally occur when the blood calcium levels decline due to inadequate consumption of calcium through dietary means.

In contrast, osteoblasts promote the uptake of bone minerals from the bloodstream to lay the matrix of new bone tissue. Hence, the old or damaged bone is replaced by a new and efficient bone. However, resorption and formation of bones are regulated by hormones that act as chemical messengers secreted in response to the stimuli. The parathyroid hormone promotes the osteoclasts to break down the bone material, while calcitonin inhibits the action of osteoclasts. On the other hand, a low concentration of parathyroid hormone and a high concentration of calcitonin often promotes the activity of osteoblasts. This eventually promotes bone mineralization by uptake of minerals from the bloodstream. The bone mineralization ultimately leads to the formation of the matrix of a new bone.

Old or injured bone tissues are replaced with new efficient ones through the remodeling process, which involves bone resorption followed by the formation of a new bone. Hormones generally regulate the resorption and formation processes. The parathyroid hormone promotes the action of osteoclasts and inhibits that of osteoblasts. In contrast, calcitonin inhibits the action of osteoclasts and promotes the activity of osteoblasts.

What can osteogenic cells differentiate into?

Osteogenic cells can differentiate into another type of bone cell such as an osteoblast, in response to a stimulus. These bone-forming cells may further give rise to osteocytes and bone lining cells.

What is the role of osteogenic cells in bone repair?

In response to the stimuli such as bone injury or damage, osteogenic cells can give rise to osteoblasts that are responsible for the formation of bone structure. Osteoblasts further form cells called osteocytes that maintain the bone structure by regulating the mineral concentration of the matrix.

What are the function of bone cells?

What are the 4 types of bone cells?

Yes, osteogenic cells are undifferentiated bone cells that can divide and differentiate in response to some stimulation. They mainly form different types of bone cells including osteoblasts or osteocytes. Thus, these cells are sometimes referred stem cells of the bone.

Joints in the Body: Structures & Types | What is a Joint in the Body?

Human Skin Diagram & Function | How Many Layers of Skin Are There?