Bone is responsible for providing the body with its structure, protecting important organs like the heart, lungs, and brain, and calcium storage. This important biological material must grow and change as humans grow and change. How do bones grow in length? Bones grow in length at the epiphyseal plate throughout childhood and adolescence, usually ending in the early or mid-20s. Cartilage is formed in a matrix near the epiphyseal plate by cells called chondrocytes, which multiply through mitosis. Once these cells have died, new cells called osteoblasts move into the matrix and transform it into bone through a process called ossification. Ossification is the transformation of cartilage into bone, stemming out from an ossification center.

Many factors impact the speed and amount of bone growth. Age and genetic makeup usually dictate how much bone is created at any given time. The bone growth itself is managed by hormones, which will be covered in greater detail later in this lesson. This process is a long one, usually beginning at three months of age and continuing until the early or mid-20s. 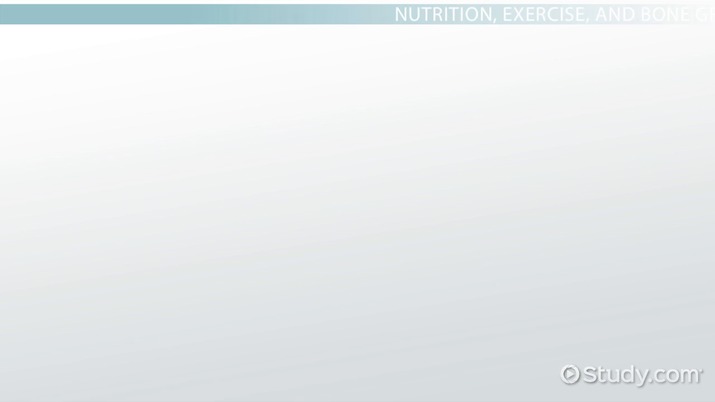 Try it now
Back
Coming up next: What is Digestion? - Definition & Process

Bone growth is impacted and regulated by hormones from several places in the body. What hormones affect bone growth? Here is an incomplete list of some hormones that influence bone growth:

Once the body is done growing, the epiphyseal plate itself is ossified and only appears as a line in the bone. Damage to the growth plate can result in malformed bones that grow improperly or not at all. The lines left behind by growth plates are detailed in the following diagram.

Bones are usually developed by the early or mid-20s. Before that time, bone growth is continually happening, from even before the child is born. To fit through the pelvis, the skull of the baby isn't complete. Fontanels, which are soft spots on the baby's skull, allow the flexible plates of the neonatal skull to overlap and become small enough to fit through the pelvis. Over time, the soft spots close and ossify, creating a mature skull, pictured here:

As many as 40% of girl children and more than 50% of boy children break a bone at some time in their childhood. This is partly due to roughhousing, vigorous play, and accidents. However, there is a biological component as well. Bone growth isn't complete in childhood.

This lack of development causes the bones to break more easily in a child than in an adult. Their bones are more flexible, but not as strong. Interestingly, the apex of statistical bone fractures is between the ages of 11 and 15 years of age. Adolescent bone is no longer as flexible as it was during childhood, and the pubertal growth spurt dramatically increases the number of minerals required by the body. Mineral reserves are often depleted, and the body can't keep up unless the adolescent has a very balanced diet full of minerals.

There are many bone growth disorders, both common and rare. Some of the most common ones are listed here:

Bone growth is regulated by a variety of hormones. Growth Hormone (GH) is the most important hormone for bone growth in children. It is secreted by the anterior pituitary gland. It increases bone turnover by increasing the number of osteoblasts, and how hard those osteoblasts are working.

There are many diseases that impact bone growth. Osteoporosis, which is the most common metabolic bone growth disorder, commonly afflicts older adults.

How do bones grow in length?

What can cause extra bone growth?

Extra bone growth can be caused by hormonal imbalances, particularly an overage of Growth Hormone (GH) secreted by the pituitary gland. There are genetic disorders that can result in extra bone growth as well.

Trabeculae Bone Function | What Is a Trabecula?

Epidermis | What Does the Epidermis Do?