Copyright
Timothy Huggins-Polite, Amanda Robb
Explore the Taiga biome food web. Learn the definition of the Boreal Forest, where it is found, and discover the Boreal Forest's producers and consumers. Updated: 07/17/2022

The Boreal Forest is Earth's largest biome on land. It spans different parts of North America, Europe, and Asia and is located specifically in Canada, China, Finland, Japan, Norway, Russia, Sweden, and the United States of America. The boreal forest is the coldest, most northern forest on Earth, consisting of primarily coniferous gymnosperm trees, with freezing temperatures that last for 6-8 consecutive months. Coniferous trees dominate the Boreal Forest biome due to the nature of their leaves. These trees have pines as their leaves. These pines allow the tree to capture sunlight efficiently while reducing the risk of freezing during the winter. Additionally, the pines have very little sap in them, so if they do freeze, the leaves will have minimal damage. Animals of this biome range from insects to small mammals, leading up to large predators, such as bears and tigers. While the Boreal Forest has temperatures above freezing for four months of the year, small sections of this biome are found to be covered in permafrost. A common name for this biome is the Taiga, and it can be used interchangeably with the term "Boreal Forest." 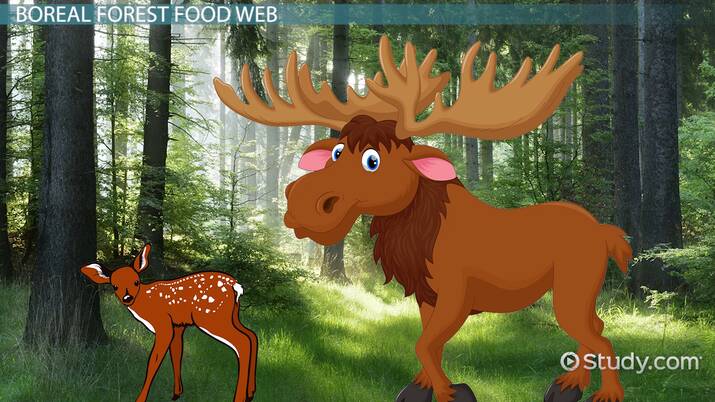 Try it now
Back
Coming up next: The Coniferous Forest Food Web

The food web of the Boreal Forest consists of producers and consumers. Producers are organisms that create and introduce energy into the biome. In its most simplified form, a food web can be considered similar to this:

One aspect of what makes a food web more advanced than a simple food chain is that it illustrates how sometimes a higher-level organism will not interact with a lower-level organism. For example, a bear will not hunt a wolf, although a wolf is at a lower level on the food web. When an organism eats another, the energy is transferred from the organism eaten to the organism eating. In the simplest terms, when a person eats a steak or salad, the energy in the food is transferred into their body. Each food web level can also be considered a Trophic Level. The passing of energy through levels of the food web allows the biome to sustain itself. The energy passes through the biome from producers to consumers. The larger consumers eat the smaller consumers, and the smallest consumers eat producers. The trophic levels of the food web are how this concept can be visualized.

While it is challenging to organize a food web for every single organism in any Biome, the most prominent organisms of the Taiga will be discussed here. All multicellular organisms are placed into one of three categories:

This discussion will focus on the producing and consuming members of the food web, as decomposers can fit on multiple levels.

Producers of the Boreal Forest

The producers of the Taiga consist of "evergreen" coniferous trees, such as pine, fir, and spruce. The broad-leafed Larch Tree can also be found in the Taiga, along with moss on the ground. Algae also grow in the still waters of lakes and ponds. These organisms are the producers and make up the lowest level of the Boreal Forest's food web.

Consumers of the Boreal Forest

The Boreal Forest is the world's largest land biome, and it is located just below the arctic circle in North America, Europe, and Asia. The Boreal Forest, also known as the Taiga, is frozen most of the year, as temperatures stay below the freezing point for approximately eight consecutive months. The Boreal Forest consists of primarily coniferous trees such as pine, spruce, and fir. These trees are known as evergreens and are the dominant species of plants for this biome. A food web illustrates how energy flows through the biome across multiple trophic levels. The food web of the Boreal Forest consists of Producers and Consumers organized across multiple trophic levels. The Taiga's primary consumers are insects, rodents, birds, and deer. The secondary consumers of the Taiga consist of owls, eagles, wild boars, and foxes. Tertiary consumers of the Taiga consist of Wolves and Lynx. Lastly, Apex Predators of the Taiga consist of Bears and the Siberian Tiger.

What are the producers of the boreal forest?

The producers of the Boreal Forest are primarily coniferous trees. Algae are also producers in this biome, along with moss that grows on the ground. This biome has very few shrubs or bushes.

What is the food web in the Boreal forest?

The food web in the Boreal Forest illustrates the flow of energy through a biome and encompasses multiple members at each trophic level. It shows producers and consumers. Unlike a food chain, which only shows one consumer per organism, a food web illustrates all the consumers for each organism.