What is Boyle's Law?

Consider an enclosed system filled with an ideal gas, which is held at a constant temperature. Imagine that the size of the box can be freely adjusted without affecting the temperature, or allowing any gas to escape or enter. What happens to the pressure of the gas as the size of the box is adjusted? What would happen to the volume of the box if a pump was used to change the pressure of the gas? The answer to these questions is given by the mathematical relationship known as Boyle's law.

Boyle's law describes the relationship between the pressure and the volume of an ideal gas which is being held at a constant temperature in an enclosed system, meaning the number of gas molecules is constant. It states that the product of the pressure and volume of an ideal gas must be constant, which implies the relationship between pressure and volume is inverse. This means that at a constant temperature if either pressure or volume is increased, the other quantity must decrease, or vice versa.

The relationship between volume and pressure provided by Boyle's law can also be understood through the kinetic molecular theory of gases (KMT). One of the assumptions needed to apply KMT is that all gas particles in a system have the same kinetic energy, whose value is temperature-dependent. This means if the temperature of the system is held constant, then the kinetic energy of the particles is constant as well. Pressure is defined as the force per unit area. The pressure a gas exerts on the walls of a container is due to the gas particles colliding with the walls of the container. Imagine again a freely adjustable box filled with an ideal gas held at a constant temperature. If the volume of the box is reduced, then the distance each molecule must travel to collide with a wall is reduced as well. Each molecule will collide with the container walls more frequently, thereby imparting more pressure overall. Similarly, by increasing the volume of the box, the distance between walls increases, less frequent collisions will occur, and therefore a lower pressure in the system.

All animals must breathe to survive, and it is Boyle's law that describes how lungs perform this action. Muscles in the body pull on the lungs, causing them to increase in size. This increase in volume causes the pressure in the lungs to decrease below atmospheric pressure (the pressure outside of the body). Since gas molecules move from areas of high pressure to areas of low pressure, this forces air into the lungs. To exhale, the lungs contract which decreases their volume, thus increasing the pressure inside of them and forcing the air back out.

A bladder pump is a device that uses Boyle's law to pump air in a single direction, which can be used to inflate objects or create a vacuum inside a container. A simplistic bladder pump contains a bladder, which is similar to a balloon but has two openings for air to flow through. and is typically housed in a container. Each end of the container has a valve which only opens in one direction and which the openings of the bladder are connected. When the pump is turned on, some kind of mechanical device causes the bladder to rapidly expand and contract. Upon expanding, the increased volume decreases the pressure in the bladder, allowing air to rush in. When the bladder contracts, the volume decreases which expels the air out of the other end of the pump, and the unidirectional valves ensure the air can only move in one direction. 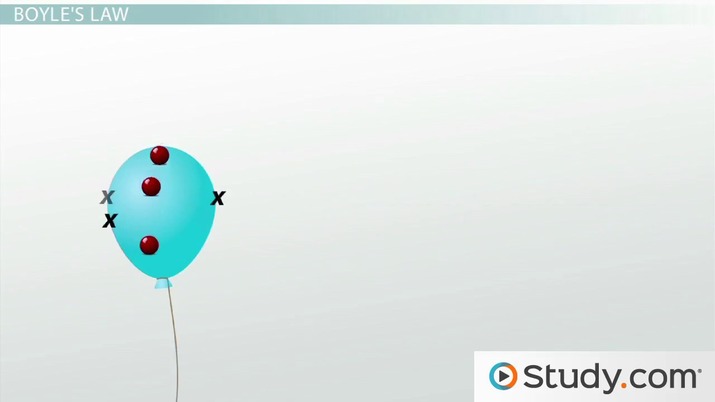 Coming up next: Charles' Law: Gas Volume and Temperature Relationship

Mathematically, Boyle's law is expressed by the equation:

Here, P stands for pressure, V stands for volume, and k is a constant. This equation also provides proof that the relationship between pressure and volume is an inverse one. In order for the product of two variables to always equal the same value, if one variable is changed, then the other must change in the opposite direction. Consider a container filled with an ideal gas at 2 atm, and occupying 2L of space. The k value for this system is then equal to 4. If the volume in the container is doubled to 4L, then Boyle's law tells us the pressure inside must decrease to 1 atm in order for the k value to remain constant.

To calculate problems using the above form of Boyle's law, the equation must be applied twice. The initial conditions must first be used to calculate the k value for the system. That k value is used in the equation again along with the new value of either P or V. Finally, the equation is rearranged to solve for the missing quantity. In order to avoid this redundancy, Boyle's law can be expressed in the form {eq}P_1V_1=P_2V_2 {/eq}. Variables with subscript 1 represent the initial values for pressure and volume before any change is made to the system. Variables with subscript 2 represent the values for pressure and volume after some change has been applied to the system. This form of Boyle's law simplifies some calculations since the initial values and known final value can all be used in the same equation, which is then rearranged to solve for the unknown variable.

Consider a system containing an ideal gas, with an initial pressure of 0.985 atm occupying a volume of 1.2 L. What would the pressure be if the size of the container was decreased to 0.7 L? In this problem, we have been given the initial conditions for the system and the change in container volume, and we are asked to find what effect this volume change has on the final pressure. The variable associated with the final pressure is {eq}P_2 {/eq}. We now solve the Boyle's law equation for {eq}P_2 {/eq}, and use the other variables to calculate the equation.

As expected, the decrease in container volume led to an increase in pressure.

Again, we consider an ideal gas at a constant temperature. The volume of the container containing the gas is adjusted so that the original pressure of the system has been doubled. After this, the system is measured and gas is found to be at 2.4atm of pressure, occupying 22.0L of space. Assuming the container of the gas is enclosed and freely adjustable, what was the original volume before the pressure was changed? In this problem, we have been given the results of a change in the system, and we are being asked to find what the initial conditions were. We first find the initial pressure by dividing the final pressure by two (since we know it was doubled). This means our initial pressure was 1.2atm. To find the initial volume, we solve the Boyle's law equation for {eq}V_1 {/eq}, and use the other variables to calculate the equation.

This tells us that the doubling of the initial pressure required the volume of the container to be halved.

Boyle's law describes the inverse relationship between the pressure and volume of an ideal gas held at a constant temperature in an enclosed system, meaning the number of gas molecules is constant. If the pressure of the system increases, the volume must decrease, or vice versa. This relationship can also be demonstrated by examing the kinetic molecular theory of gases, or KMT. Changing the size of a container filled with an ideal gas changes how frequently the gas molecules collide with the walls of the container, this then determines the pressure. Larger containers mean less frequent collisions and therefore less pressure. Mathematically, Boyle's law can be described using the equations {eq}k=PV {/eq} or {eq}P_1V_1=P_2V_2 {/eq}, with the latter being used more frequently in calculations.

Is Boyle's law a direct relationship?

Boyle's law is not a direct relationship. It is an inverse relationship. It tells us that for an ideal gas held at a constant temperature, the product of the pressure and volume must be constant. This means if one quantity is increased or decreased, then the other quantity must decrease or increase, respectively, for the value of the product to remain constant.

Boyle's law tells us that the relationship between pressure and volume is inverse for an ideal gas held in a closed system at a constant temperature. If the pressure increases, the volume must decrease and vice versa.

What two factors are used in Boyle's law?

Two factors used in Boyle's law are pressure and volume. Boyle's law is a special form of the ideal gas law, where the temperature is held constant and therefore not needed in calculations.

What is a good example of Boyle's Law?

An example of Boyle's law is breathing. When the lungs change volume, this creates a difference in pressure inside the body relative to the atmosphere, driving air in and out of the lungs.