Adrianne Baron, Artem Cheprasov
Learn about the blood supply of the brain and its arteries. Learn about the anatomy of brain arteries and veins and how they protect the brain from toxins. Updated: 10/19/2021

Such a connection of the two major arteries that supply the brain is important because it serves as a backup system - i.e., in case a problem affects any one of the major arteries, all parts of the brain will continue to receive blood supply from the other artery. The normal rate of cerebral blood flow to the brain is generally 750 mL per minute, which is roughly 15% of the total output of the heart. 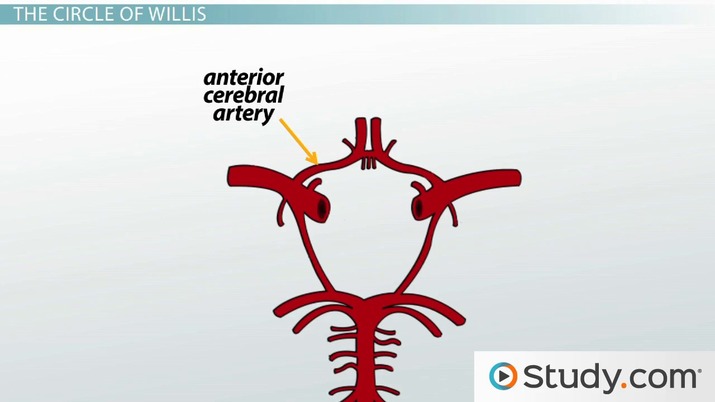 Specifically, the brain is supplied oxygenated blood by two pairs of arteries including the vertebral arteries and the internal carotid arteries. As they reach the brain, their arteries branch off and their terminal branches anastomose, or connect, to create a structure known as the Circle of Willis, which is located on the underside of the brain. The arterial branches that supply different parts of the brain arise from this Circle of Willis.

The venous drainage system of the brain begins with the dural venous sinuses. These are drainage holes that are located within the meninges of the brain. They are responsible for draining blood from the brain, spinal cord, face, and scalp. There are a total of eleven dural venous sinuses and they end up dumping the blood that they have collected into the internal jugular vein. The internal jugular vein is the largest vein in the neck that is responsible for draining blood from the entire head region. It ultimately leads to the superior vena cava. There are two internal jugular veins, one on each side of the neck.

Disorders of the Brain Arteries

The arteries of the brain function normally most of the time, but there are instances where something can go wrong within the arteries and this spells trouble for the brain and the body as a whole. These disorders are discussed below.

The blood-brain barrier, or BBB, is comprised of the endothelial cells that determine which substances enter the brain from the blood. It keeps the fluid around the brain and spinal cord known as cerebrospinal fluid sterile from invading toxins. Brain cancers are difficult to treat because the medications have a hard time passing the blood-brain barrier. Venous drainage from the brain is accomplished through the dural venous sinuses which drain into the internal jugular vein. Disorders of the brain include a stroke, which is when there is an interruption in blood flow to the brain, an aneurysm, which is a bulging in the artery, and traumatic brain injury, which is when there is an injury to the brain.

What two pairs of arteries supply the brain?

What is a blocked artery in the brain?

What are brain arteries called?

Brain arteries are the vertebral arteries and the internal carotid arteries. The different arteries of the brain connect together in a structure known as the Circle of Willis.

The Mechanism of Spinal Cord Trauma