James Reynolds, Elizabeth Friedl, Elaine Chan
What is buoyancy? Learn the buoyancy definition and calculate it with Archimedes' Principle. See how to use the buoyancy formula with various example problems. Updated: 07/12/2021

Buoyancy is defined as the ability of an object to float. This happens when an object placed in a fluid is acted upon by an upward buoyant force. The gravitational force pushing down on a buoyant object in fluid will equal the force of the fluid pushing upward on the object.

For example, if a steel sphere were dropped into water, it would immediately sink to the bottom, but when a steel boat enters the water, it floats. The combined density of the heavy steel of the boat and the very light air inside the boat will be less than the density of water and allow the boat to float. To understand precisely why this happens, we need to understand Archimedes' principle, buoyant force, and the buoyancy equation.

The buoyant force is a net upwards force acting on any submerged or partially submerged object. Think of a ball in the water. Gravity is pushing down on all the water, meaning as the ball falls deeper the weight of all the water above it is pushing in on the ball from all sides. Pressure always increases with depth in fluids (this is why our ears pop when we dive in a pool). Since the bottom of the ball is deeper under water than the top, the pressure on the bottom of the ball is greater than that on the top. The net pressure upwards on the ball is defined as the buoyant force. This force is fundamentally tied to gravity and because of this there is no buoyancy in space. 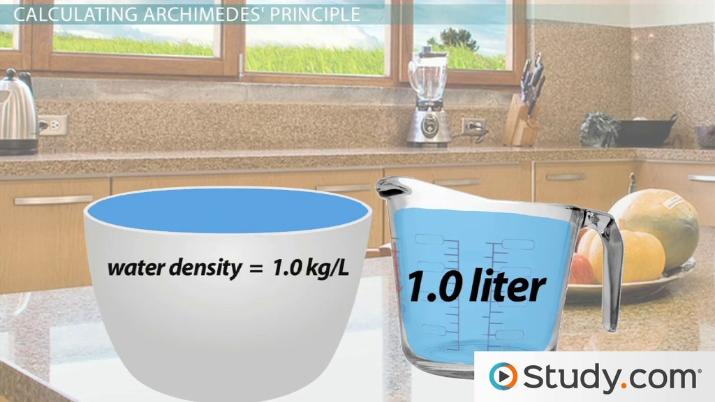 Try it now
Back
Coming up next: Torricelli's Theorem: Tank Experiment, Formula and Examples

Archimedes was a Greek mathematician. He was asked by King Heiron II of Syracuse to determine if the royal gold crown was made of pure gold. Archimedes noticed that when he put gold and silver that were the same weight as the crown in water, they displaced different amounts of water. The gold displaced less water than the silver. Yet, when Archimedes put the gold crown in the water, it displaced more water than the equivalent weight of pure gold. He determined that the crown was a mix of gold and silver.

Archimedes' principle states that when an object is placed in water an upward force ({eq}F_b {/eq}) will act on the object that is equal to the weight of water ({eq}W_f {/eq}) the object displaces. This is the buoyant force described earlier and is surmised in the following equation:

When using the formula for buoyancy, we are using the formula to solve for buoyant force ({eq}F_b {/eq}). The buoyancy formula includes the acceleration due to gravity of 9.8 meters per second squared (g), the density of the fluid (p), and the volume of the displaced fluid ({eq}V_f {/eq}). These factors are all multiplied together to give us the buoyant force in the equation {eq}F_b = gpV_f {/eq}.

This equation can be derived from Archimedes' principle because the weight of the displaced fluid can be described as the mass of the fluid multiplied by the acceleration due to gravity, so we have

Now the mass of the displaced fluid can also be described by density multiplied by volume. This gives us the buoyancy formula:

The buoyancy formula, {eq}F_b = gpV_f {/eq}, can be used to solve a variety of problems. Note that we must take into account whether the object is partially or fully submerged when applying this equation.

Determine the buoyant force when a cube with an edge length of one meter is fully submerged in water.

We first need to determine the components on the right side of the buoyancy equation:

Calculate the buoyant force when a cube with volume {eq}1 \text{ m }^3 {/eq} is half submerged in water.

Applying the buoyancy formula, we find that

In the ice cube example, the ice floats because it is less dense than water. Most things constrict as they freeze, but water is one of a few substances that expands when frozen. When density goes down, the ice cube displaces more water thus increasing the buoyant force.

With the birthday balloon, it is important to remember that a fluid is any substance whose particles can move freely past each other. Air and any other gases fit this description. Most balloons are filled with gas of a lower density than air, which causes them to rise.

People are usually about 70% water. We have bones and muscles that are more dense, and air in our lungs that is less dense. The relative ratios of these things cause some people to float and others to sink in water. Scuba divers use metal weights and an air-filled buoyancy control device to manipulate their average density to rise and fall in water. An object that rises has positive buoyancy. One that neither rises nor falls is neutral, and one that falls has negative buoyancy.

Concepts of Weight, Density and Buoyancy

So, the formula for specific gravity is common expressed as

Note that this ratio is dimensionless (it has no units of measurement). Rather, it gives us a value that allows us to determine whether an object will sink, achieve neutral buoyancy, or float:

Buoyancy describes how well an object floats in a fluid (usually water). When an object is fully or partially submerged in a fluid, the upward force exerted by the fluid on the object is known as the buoyant force.

Archimedes' principle tells us that the buoyant force on a object will be equal to the weight of water (or any fluid) displaced by the object, and it can be used to derive the following buoyancy formula:

The buoyancy formula has the following components:

A buoyant object will float upwards until the downward gravitational force (the object's weight) and the upward buoyant force are equalized. Note that whether an object floats, sinks, or remains at the same depth, there is a buoyant force present as long as the object is fully or partially submerged in a fluid. Looking at the relative density, or specific gravity, of an object helps us determine how an object will behave when placed in a fluid.

If we weigh an object in air, and also weigh that object while it is submerged in water, the difference in the weights is the buoyant force.

An object of weighs 14.7 kg in the air. The same object weighs 13.4 kg when submerged in water. What is its density?

A helium balloon is going to lift a load of 180 kg. What volume of helium is needed to lift the load, including the weight of the empty helium balloon?

V is the volume of helium.

g is the acceleration due to gravity.

The density of air near the Earth's surface is 1.29 kg per meter cubed.

The density of helium is .18 kg per meter cubed.

Solving for V in the above equation:

How do you calculate buoyancy?

Fb is the buoyant force

g is the acceleration due to gravity of 9.8m/s2

p is the density of water

V is the volume of displaced fluid

What are the 3 types of buoyancy?

What is a Newton of buoyancy?

N is a Newton of force which is one kg*(m/s^2). This is the standard way of quantifying the buoyant force.

Density Overview & Examples | How to Predict What Will Float or Sink

The Potential of a Cylinder

Volume & Surface Area of a Torus