Copyright
Ron Petrarca, Paul Brazinski
Learn the true definition of the term "Byzantine." Discover facts about the Byzantine Empire's culture and a timeline of the major events which make up its history. Updated: 04/29/2022

The term "Byzantine" derives from the original name of the capital of the Byzantine empire, Constantinople. This city's name was Byzantium until after the Roman Emperor Constantine moved the capital city to Byzantium. It was subsequently named after him. One of the reasons he moved the capital was because the Western Roman Empire was in a period of decline, and the eastern half was richer and more politically stable. The split between the empire had been evolving since the late 3rd century AD. Some time after Constantine's death, the split became permanent, and the two halves were governed by separate emperors. The Western Roman Empire fell in 476 AD, but the Eastern Roman Empire continued for nearly 1,000 years.

History of the Byzantine Empire during the Middle Ages

During the Early Middle Ages (476 - 1000 AD), the Byzantine Empire was one of the most powerful states in Europe. It was a Christian empire and, as such, had a close connection to the people of Western Europe. However, by the year 1054 AD, the religious differences between Byzantine Christians and Western European Christians had grown so large that the Byzantines formed their own branch of Christianity. This branch is now known as the Eastern Orthodox faith.

The territory and power of the Byzantine Empire began to decline from the 7th century onwards. Various Islamic powers gradually chipped away at Byzantine territory.

The empire further declined when Crusader armies from Western Europe sacked Constantinople in 1204 and established the Frankokratia, a Western European-controlled state within Byzantine territory in Greece and Asia Minor. This state was overthrown by the Byzantine emperor Michael VIII Palaeologus, who restored Greek control to the Byzantine Empire and initiated the Palaeologan Renaissance. However, after this renaissance ended, the Byzantine Empire once again fell into decline. In 1453 AD, the city of Constantinople was conquered by the Ottoman Turks. This event marked the end of Byzantine history.

The city of Constantinople is now called Istanbul and is the largest city in the nation of Turkey. However, many remnants of the Byzantine Empire can still be seen here. The most famous is the Hagia Sophia, a large church that was a showpiece of Byzantine engineering and architecture.

The Byzantine Empire's social structure was largely based on the old Roman Empire's society. The head of state and head of government was the emperor, who ruled as an absolute monarch. Beneath him was the imperial senate, which acted as the legislative branch of government. The Byzantine Empire also had a large and elaborate bureaucracy that helped govern its vast territories.

Emperor Constantine (c. 272 - 337 AD) is considered the founder of the Byzantine Empire. However, this designation is somewhat problematic because scholars do not believe that the Byzantine Empire developed into a distinct civilization until several decades after Constantine's death. Historians refer to Constantine as the founder because of his decision to move the capital of the empire to Byzantium. In other words, he set the wheels in motion for the formation of a new society.

Constantine is also famous for granting official toleration of Christians in the Roman Empire. He himself converted to Christianity towards the end of his life. By the end of the 4th century, Christianity had become the religion of both the Eastern and Western Roman empires.

The theological split between Catholics and Eastern Orthodox Christians was a gradual one. The main dispute rested on who was considered the head of the Christian faith. Westerners believed it was the pope, while the Byzantine people increasingly came to see the Patriarch of Constantinople as the head of the faith. The Catholic Church had a powerful political ally in the Holy Roman Empire, which was founded in 800 AD by Charlemagne, king of the Franks. This mega-state often came into conflict with the Byzantines throughout much of the Middle Ages. Eventually, the differences between the Catholic Church and the Byzantines led to the Great Schism of 1054. 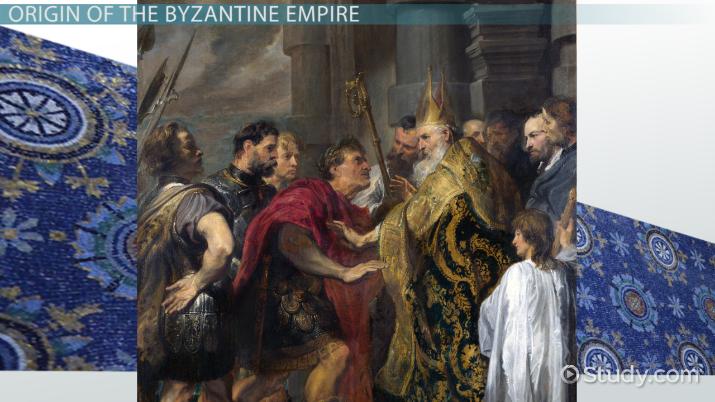 Try it now
Back
Coming up next: Women in Ancient Rome: Facts, Daily Life & History

What Language Was Spoken in Byzantium?

The Greek language is divided up into several different stages. The Greek spoken by the Byzantines differed in both grammar and vocabulary from the ancient language spoken by Plato and Aristotle. It was also somewhat different from the koine dialect that was used in Roman times. Byzantine Greek was the immediate predecessor to the Modern Greek language spoken in Greece and Cyprus today.

It should also be noted, however, that the Byzantine Empire was a multi-ethnic state. There were many non-Greek linguistic minorities living within its territories. Besides Latin speakers, another important linguistic minority was the Armenians.

Here is a timeline of some important dates from the history of the Byzantine Empire:

Among the events that occurred during the time of the empire were: the Visigoth sack of Rome in 410 AD, the fall of Rome in 476 AD, and the Persian sack of Jerusalem in 614 AD. The Byzantine Empire lasted until 1453 AD when it was finally conquered by the Ottoman Turks.

How did the Byzantine Empire start?

What was the Byzantine Empire called by its citizens?

The Byzantines thought of themselves as Romans. In other words, they did not called them selves Byzantines. The Greek word for Romans is Rhomaioi.

What was the Byzantine Empire known for?

The Byzantine Empire is known for being one of the most powerful states in Europe and the Mediterranean during the Middle Ages. It is also known for founding a new branch of Christianity, the Eastern Orthodox faith.

Why do we say Byzantine?

Byzantine is a name given by modern historians to the Eastern Roman Empire. It derives from the original name for the capital of the empire, Byzantium. Byzantium became Constantinople and later Istanbul.

What is the timeline of Byzantine Empire?

The timeline of the Byzantine Empire ran from circa 395 AD to 1453 AD. Some historians push the date further back to 330 AD.

How long did the Byzantine Empire endure?

The Byzantine Empire endured from circa 395 AD to 1453 AD for a total of 1,058 years. The empire's influence on European culture lasted much longer.