Catastrophism is a previous geological paradigm and theory that explains Earth's current landscape and shape as forming out of abrupt, violent, short-lived, and maybe even global events resulting in mass extinction and the changing landscape. Under catastrophism, for example, mountain ranges result from the sudden and massive uplift of the landscape by earthquakes. This theory was postulated when the culture surrounding the scientific community largely needed to factor in and reckon with the Bible and its stories of catastrophes such as Noah's flood. Additionally, the astronomy community largely imagined the universe as static and unchanging. In the early 19th century, a French paleontologist Georges Cuvier promoted the idea of catastrophism, supporting it with his observations of the fossil record. The fossil record is preserved in geological time or layers of rock. Cuvier noticed that fossils of organisms seemed to cease immediately above some geological epochs and strata. This led him to believe that Earth's history of life comprised long periods of stability that were interrupted abruptly by catastrophe, some of which Cuvier imagined as recurring. He elaborated from this that the Earth must be several million years old. 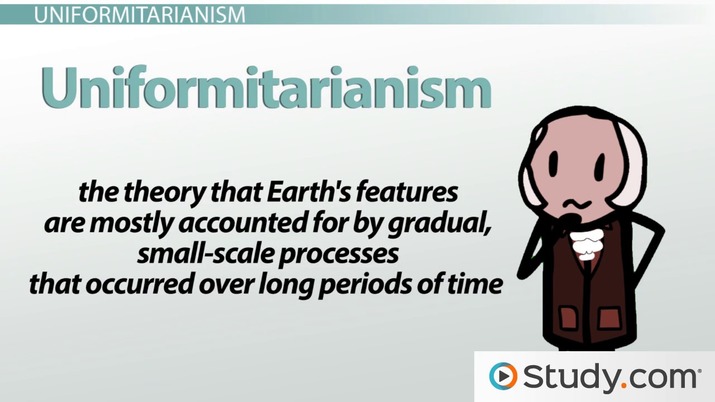 Coming up next: Methods of Geological Dating: Numerical and Relative Dating

Prior to Georges Cuvier, a Scottish geologist named James Hutton wrote a different explanation for some of Earth's landscapes, such as sedimentary rock processes. Seen in the 18th century as the father of geology, James Hutton's ideas were adopted and expanded upon by the geologist Charles Lyell. Publishing these ideas in the 1830s in his Principles of Geology, Lyell popularized the theory of uniformitarianism, sometimes called gradualism.

Lyell explained that Earth's current geological processes are the key to understanding Earth's past. He denied that cataclysms such as massive earthquakes, floods, or volcanic eruptions could explain the Earth's landscape because no such events seem to occur on a large enough scale in the present. Lyell instead argued that Earth's surface was shaped by long-term and gradual actions through earthquakes, volcanism, and weathering and erosion. Since these processes can easily be observed today, geologists endorsed uniformitarianism from the time of Principles of Geology into the late 1970s.

The paradigm shift toward uniformitarianism led scientists to postulate that Earth was much older than previously thought. In 1956, Earth's age was determined to be ~4.5 billion years old through the work of Clair Patterson and his use of uranium-lead dating.

The theory of uniformitarianism is in contrast with the theory of catastrophism. Catastrophism regards Earth's geological history as being relatively stable with intermittent and abrupt events of cataclysms. On the contrary, uniformitarianism explains that actions that change Earth's crust are continuous and uniform processes such as weathering, sedimentation, erosion, continuous and periodic volcanism, earthquakes, and other events associated with the theory of plate tectonics.

When uniformitarianism was popularized, scientists essentially wanted to distance themselves from religion and theories concerning cataclysms. Within the scientific culture, it became difficult for any new theories or geological explanations connected to catastrophes to be taken seriously during the early 1900s.

In 1923, the American geologist J Harlen Bretz published a theory regarding the geological processes that contributed to the formation of the channeled scablands in Washington State. Bretz hypothesized that the glacial Lake Missoula had a glacial dam that burst, resulting in massive floods spanning 5,000 square kilometers some 14,000 years ago. The geological community initially rejected Bretz's explanation, but he was eventually rewarded the Penrose Medal for his work and contribution to geology. Additionally, Bretz initially argued the channeled scablands were the result of one cataclysmic flood but having to reckon with the paradigm of uniformitarianism, he settled with several large floods spanning a longer period of time. Scientists debated the number of floods for years and still do today, some arguing one flood, several floods, and up to 40 floods.

The paradigm of uniformitarianism and the scientific culture surrounding it also made it difficult for Luis Alvarez and his son Walter Alvarez to present their hypothesis in 1980 of an asteroid impact resulting in the Cretaceous-Paleogene extinction event 66 million years ago. They supported their hypothesis with observations and data collected at the k-t boundary layers of rock and strata across the Earth. Their hypothesis initially faced much scrutiny but was bolstered by the 180-kilometer crater at the Yucatan Peninsula in 1990.

With the works of geologists like J Harlen Bretz, and Luis and Walter Alvarez, the paradigm theory of uniformitarianism has recently shifted in the late 20th century and early 21st century. Geologists no longer subscribe to strict gradualism but accept that cataclysms at the scale of global events have occurred in Earth's past, such as the collision that resulted in the Moon's formation. Today, geologists consider Earth's geological history as being shaped by mostly gradual processes such as erosion, plate tectonics, and volcanism, but occasionally interrupted by catastrophic events. For example, sudden extinction events observed in the fossil record may be explained by the high magnitude and low-frequency events such as asteroid impacts and the eruption of super volcanoes. In addition, some scientists have argued Earth's history has been influenced by coronal mass ejections and maybe even supernova gamma-ray bursts.

Recently, the younger dryas impact hypothesis has been gaining traction. Supporting evidence of impact proxies such as shocked quartz, nanodiamonds, and high-temperature micro spherules collected from the younger dryas boundary line and analyzed by scientists like Richard Firestone suggest fragments of a large comet or asteroid disintegrated and resulted in impacts and airbursts across the Americas, Europe, and parts of Asia around 12,800 years ago. This global cataclysmic event may have been the cause for the mass extinction of Pleistocene megafauna, the disappearance of the Clovis culture from the geological record, and possibly a global flood and sea-level rise. The hypothesis has undergone extensive scrutiny and criticism since its first scientific postulation in 2006. However, the possible association of the 30-kilometer crater found under the Hiawatha Glacier in Greenland with this time period could give more credence to the hypothesis.

Overall, strict catastrophism is a geological theory that explains the current shape of Earth's surface as forming out of abrupt, violent, short, and sometimes even global events resulting in mass extinctions and the changing geosphere. Catastrophism was popularized by Georges Cuvier through his study of the fossil record. Catastrophists in the early 19th century were largely influenced by the Bible since cataclysms at such a scale in their stories could account for some of Earth's landscape. Cuvier's observations of the fossil record resulted in his estimate of Earth's age as several million years old. However, the popularization of uniformitarianism resulted in much older estimates.

Uniformitarianism evolved out of the work of James Hutton which earned him the title of The Father of Modern Geology. Charles Lyell's uniformitarianism regards Earth's surface and landscape as being influenced by gradual processes and changes, the same processes that can easily be observed today, such as weathering, erosion, volcanism, and plate tectonics. However, the geological community now accepts that some global cataclysms have occurred in Earth's past and have shifted towards accepting uniformitarian processes mostly shaping Earth crust, intermittently interrupted by abrupt global cataclysms and extinction-level events.

What is the difference between Uniformitarianism and catastrophism?

The difference between uniformitarianism and catastrophism is how each theory views and describes Earth's geological history. Uniformitarianism suggests that Earth's surface, such as mountain ranges, are shaped by long-term, uniform processes such as weathering, erosion, plate tectonics, and volcanism. A uniformitarian believes that the processes observed today are key to understanding Earth's past. Catastrophism describes Earth's history as being stable with intermittent, short-lived, and cataclysmic events drastically shaping the surface.

Modern geologists accept a mixture of uniformitarianism and catastrophism, describing Earth's geology as being shaped mainly by long-term processes such as weathering, erosion, and plate tectonics, with occasional, abrupt, and global cataclysmic events that change Earth's crust and result in the extinction of species.

What is the catastrophism theory?

The theory of catastrophism is the idea that Earth's surface and landscape can largely be explained by sudden, short-lived, and violent events such as cataclysmic earthquakes, floods, and volcanic eruptions. The theory explains that Earth's history goes through long periods of stability interrupted by sudden cataclysmic events, which could explain extinctions events observed in the fossil record.

What is an example of catastrophism?

A common example of catastrophism is the biblical story of Noah's flood. During the 18th and early 19th centuries, geologists felt they had to reckon with the Bible and imagined Earth's surface as being shaped by such events. However, modern-day catastrophism examples include the cretaceous extinction event caused by an asteroid impact.

Understanding the Systems Approach to Geology

Evidence for the Mechanism of Continental Drift

The Main Branches of Geology