Sasha Blakeley, Amy Troolin, Jenna Clayton
What is Catholic confirmation? Learn the definition and what the Sacrament of Confirmation is, who performs the ceremony, and the age when someone can confirm. Updated: 04/23/2021

Becoming a 'Soldier for Christ'

What is confirmation for? The confirmation definition involves affirming the faith and devotion of an individual and fully bringing them into the church. It is thought to involve an outpouring of the Holy Spirit that leaves a mark on the soul. Unlike baptism, Catholics believe that those who have not been confirmed are able to reach Heaven when they die, but they believe that the journey to get there will be much more challenging. Some Catholics consider confirmation to be a way of making them into ''Soldiers for Christ.'' This means that they are willingly devoting their lives to Jesus and fully embracing their faith.

For those who grow up in the Catholic church, confirmation usually takes place around the age of 13 or 14, though there is no set Catholic confirmation age. For the most part, children younger than 7 years old are considered too young for the sacrament as they cannot meaningfully understand what they are agreeing to. Someone receiving confirmation is called a confirmand. Confirmands usually have sponsors who mentor the confirmand and act as a role model.

For those who convert to Catholicism later in life, there is also no set age. Those who have been baptized will normally talk to their priest to discuss the sacrament in detail and to decide when they will be ready to be confirmed. Individuals who have not been baptized in the Catholic church cannot receive the sacrament of confirmation.

In most cases, Bishops are the ones who perform the sacrament of confirmation for individuals. Bishops are the overseers of dioceses, meaning that they are quite important in the Catholic church and have a lot of responsibility to guide and teach their assigned parishes. During confirmation ceremonies, Bishops wear red vestments. Those who are being confirmed usually wear modest outfits in red or white. The ceremony itself can vary, but it usually involves the Bishop laying his hands on the confirmand, offering a blessing that includes the words ''Be sealed with the gift of the Holy Spirit,'' and anointing the individual with holy oil, called chrism.

For those who are confirmed as adults and in a few other select circumstances, it is permissible for a priest to deliver the sacrament, rather than a Bishop. In these cases, it is most common for people to be confirmed at Easter Mass.

How Many Times Can You Receive Confirmation?

Some Catholic sacraments, like communion, can be received multiple times. Confirmation is different: it can only be received one time. This is also the case with baptism. The idea behind confirmation is that it leaves an indelible mark on the soul that never expires and never needs to be repeated; once someone has been confirmed, their soul has been marked by God permanently.

One other important part of confirmation is choosing the name of a saint. Confirmands choose a saint with whom they feel a particular affinity and adopt that name as a kind of secondary name. Choosing saints for confirmation is not necessary in all Catholic churches, but it is a common tradition that many people take part in. 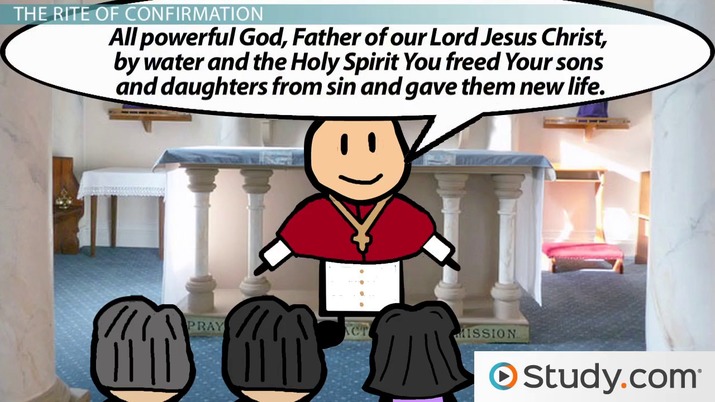 Coming up next: Paul and the Early Church Fathers

Baptism is the first sacrament that all Catholics experience. This is the fundamental process during which an individual's soul is saved, bringing them into the church. Those who are raised Catholic are usually baptized shortly after birth, but adults can also be baptized. Baptism involves anointing an individual with water and, while it is usually done by a priest, Catholic doctrine states that baptisms can be performed even by non-Christians in emergency situations.

Communion, also called the Eucharist, is a sacrament that unites people with Jesus Christ. Typically, communion is taken each week during Mass, or in some churches, more than once a week. Communion involves drinking sacramental wine and eating a small wafer. In Catholic doctrine, the eucharist is transubstantiated, meaning that it literally becomes the blood and body of Christ.

Confession, or reconciliation, is the process through which individuals confess their sins to a priest and receive absolution. Confession is an essential part of Catholicism as it allows people to be absolved and cleanses the soul. People must attend confession before some major religious events and should receive at their own discretion when they feel it is needed.

Marriage is practiced all around the world, but in Catholicism, it is a sacred experience for those involved. It unites the souls of the people who are getting married and also brings Jesus into their union. Catholicism does not recognize the possibility of divorce: marriage is a permanent sacrament.

Those who join the clergy to become priests must receive the sacrament of Holy Orders or ordination. This is a sacrament that most Catholics never experience. It can only be bestowed by particular members of the clergy and often requires a lot of formal study.

Anointing the sick is a sacrament offered only to those who are very ill or dying. It used to be called ''extreme unction.'' Priests can offer this rite to people who are very ill either to prepare them for death or to provide them strength from God that can help them to recover.

The Feast of Pentecost and the Holy Spirit

The Sacrament in Scripture

There are several passages in the Bible that Catholics believe describe the sacrament of confirmation. Perhaps the clearest example is Acts 8:14-17, which says:

''Now when the apostles at Jerusalem heard that Samaria had received the word of God, they sent to them Peter and John, who came down and prayed for them that they might receive the Holy Spirit, for he had not yet fallen on any of them, but they had only been baptized in the name of the Lord Jesus. Then they laid their hands on them and they received the Holy Spirit.''

Other passages talk about the Holy Spirit in terms of a ''tongue of fire'' that allows those who receive it to speak to each other in different tongues. For this reason, fire is one of the most important confirmation symbols, representing the energy and vigor of the Holy Spirit that is bestowed on the confirmand.

The sacrament of confirmation is a Catholic sacrament in which individuals receive an outpouring of the Holy Spirit. It is one of the seven sacraments of Catholicism, along with:

A confirmand will usually have a sponsor who mentors them and acts as a role model. Confirmation involves a laying on of hands, anointing with chrism (holy oil), and the words ''be sealed with the gift of the Holy Spirit,'' usually spoken by a Bishop. One of the major symbols of confirmation is fire, which symbolizes the energy of the Holy Spirit being passed to the confirmand.

For this activity, respond thoroughly to the following questions. Make sure to write in complete sentences and to answer as specifically as possible. Some of these questions may also depend on further research to answer adequately.

Catholic Confirmation Symbols & Saints |What is the Sacrament of Confirmation?
Related Study Materials

The Anointing of the Sick: Definition, History & Symbols

Eucharist Etymology & Symbolism | What is the Eucharist?

The Seven Sacraments of the Roman Catholic Church

7 Catholic Sacraments | What is a Sacrament?

The Pope in Early Christianity

Pharisees & Sadducees: Beliefs, Meaning & Encounters with Jesus in the Bible

History & Synopsis of the Four Gospels | What are the Gospels in the Bible?

The Gospels: The Life of Christ

What Are the Beatitudes? | Beatitudes Meaning & Importance

Paul and the Early Church Fathers

The Council of Trent: The Catholic Church Survives the Reformation