What is the Celestial Sphere?

The concept of an imaginary sphere encircling the Earth came from Aristotle's cosmology. To account for the movement of the heavens, he believed the stars and planets were affixed to crystal spheres that moved around the Earth. Since the Earth seemed stationary, it seemed reasonable to claim that the heavens were moving rather than the Earth. Aristotle's conception of the celestial sphere was undisputed for centuries. However, Aristarchus of Samos (310-230 BCE), another Greek philosopher, used mathematics to show that the Earth, rotating around its axis, instead revolved around the Sun. Aristarchus also believed the stars were very large and very far away. Unfortunately, the works of Aristarchus have been lost to time.

Use of Celestial Sphere

Although the celestial sphere is based on the erroneous assumption that the Earth is the center of the universe, the system of plotting celestial latitude and longitude is useful for referencing real and imaginary points in the sky. Like a map or globe of the Earth that shows the location of a place by its latitude and longitude, the celestial sphere has celestial coordinates similar to latitude and longitude. These coordinates are projected into the sky. Declination is the equivalent of latitude; Right Ascension is the equivalent of longitude. Declination is measured in degrees while hours, minutes, and seconds are used as measurements of right ascension. For example, Polaris, the North Star, has a declination of +89 degrees, 15 arc minutes and a right ascension of 2 hours, 41 minutes. 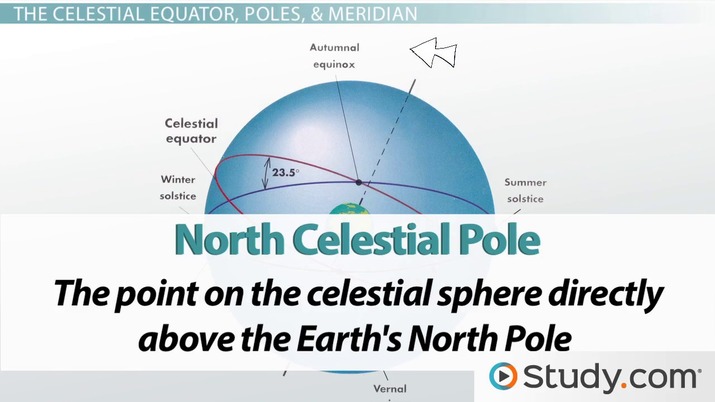 Coming up next: The Cycle of the Seasons in Astronomy

In astrophotography, the north celestial pole is the most important consideration since a telescope mount must be accurately aligned to that point to produce the spectacular images of deep space objects that require hours of exposure. Since the Earth is rotating, an equatorial mount is used to track a deep space object through the night.

The other significant point on the celestial sphere is the south celestial pole. Like its counterpart in the north, the south celestial pole is the point on the celestial sphere directly above Earth's South Pole. In the northern hemisphere, Polaris, or the North Star, is within one degree of the Earth's north celestial pole, so navigation using the North Star is easy. The southern hemisphere, however, lacks a bright pole star for navigation and astronomy. Instead, the bright constellation, the Southern Cross, or Crux, is used as a polar reference.

The points on the celestial sphere, the zenith and nadir in astronomy, are related to the concept of the meridian. The meridian arcs overhead from pole to pole; the point directly overhead on the arc is the zenith. The arc continues invisibly through a full circle, 360 degrees, so that the point beneath the feet of an observer is directly opposite the zenith, a point called the nadir. Together, the zenith and nadir help astronomers describe the positions of celestial objects.

Where is the north celestial pole?

The north celestial pole is an imaginary projection of the Earth's axis into space. It is located directly above the Earth's North Pole. While it is imaginary, it nevertheless is effective in celestial navigation.

What is the celestial sphere concept?

The celestial sphere is an imaginary sphere on which are projected objects in space. It is used to locate the positions of real and imaginary celestial objects. Although the concept is based on an Earth-centered system, it is effective for plotting celestial coordinates of objects in space.

What is the celestial sphere used for?

The Cycle of the Seasons in Astronomy

What Color is the Sun?

Barycenter Concept & Function | What is a Barycenter?

Predicting When The Moon Will Rise and Set

Development of Astronomy in Ancient History