What Is Character Motivation?

The Importance of Character Motivation

Character motivation is important because it gets the audience invested in the story. Consider a villain's backstory, for example. Very often stories will spend a significant amount of time explaining the villain's backstory. In the later installments of the Harry Potter series by J.K. Rowling, the author explains the backstory of Professor Snape in-depth through exposition. Rowling uses flashbacks to explain the motivation behind Snape secretly caring for Harry and wanting the best for him, and playing the role of a tough father. The plot reveals that Snape was in love with Harry's mother and sees much of her in Harry himself. Once the audience suddenly figures this out, many of Snape's actions are justified in the past because it is realized that he just wanted the best for Harry.

The importance of this type of explanation goes further. Since Snape's motivations about Harry are revealed, the reader can deduce that Snape's actions are meant to save Harry Potter. Once Snape is successful in doing so, the story comes full circle and a character that was once misunderstood comes to have newfound importance when his motivations are revealed. 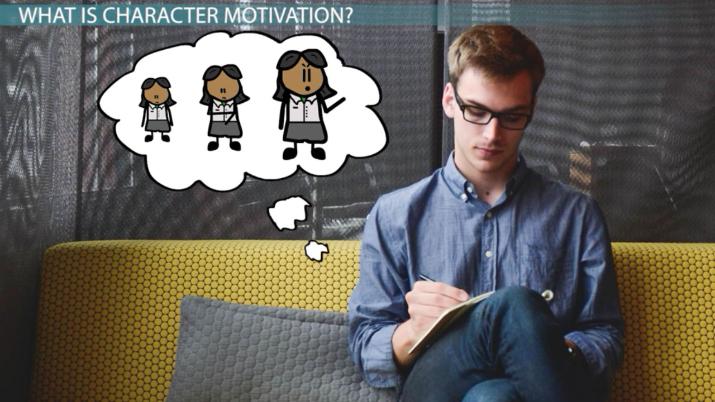 Coming up next: Overview of Literary Periods and Movements: A Historical Crash Course

Examples of Motivation in Literature

One of the most famous examples of character motivation in literature is through the work of William Shakespeare. In his masterpiece, Hamlet, Shakespeare notoriously made significant characters, such as Claudius, most interested in themselves. This motivation of self-interest drives Claudius to murder his brother so he can assume the position of king, motivating the character Hamlet to avenge the death of his father. This is external stimuli for Hamlet, whereas Claudius' motivation is internal, driven from pride and a craving for the position of king.

In the Lord of the Flies book by William Golding, the main characters are children stranded on an island. Among the children, a group develops with the natural exclusion of certain individuals, despite everyone having the same motivation to survive. As the children form bonds and relationships with one another, character motivations warp and become more sinister, with each child giving in to their more animalistic motivations of violence and rising through the social hierarchy, as opposed to the motivation for order, peace, and survival on the island. The character Ralph, a natural-born leader, is one of the few to maintain and remember the motivation to survive and get rescued.

A character can also have multiple motivations, such as in the story of Rocky in Rocky IV. In the story, Drago, Rocky's future contender, kills Rocky's trainer and best friend, Apollo Creed. One of Rocky's key motivations is to avenge the death of Apollo Creed. In addition, Rocky must prove to himself and those doubting him that he can still win a fight. All of this character motivation and the amount of dedication that Rocky has allow viewers to relate more and celebrate with Rocky when he succeeds.

The concept of intermingled motivation was understood even in the days of folklore, evident in the story of Snow White and the Seven Dwarfs. In this story, the evil queen is motivated by her drive to become the fairest woman in all of the land. When consulting her magic mirror, the mirror tells her that Snow White is indeed the fairest, whereupon the queen vows to slay Snow White. This villainous motivation drives the story, allowing for Snow White's motivation to be an escape from the wicked queen, and for the brave knight's motivation to be to slay the dragon the vicious queen eventually becomes.

Character motivation has evolved and been expressed in many different situations. In the more modern Lord of the Flies, the character Ralph's main purpose is to remember the mission of staying alive and being rescued. The exposition, or character backstory, in Rocky IV is another great example, establishing Rocky's core motivation of revenge through the murder of his best friend and mentor, Apollo Creed.

What is character motivation?

Character motivation is the reasoning behind the character's behavior and actions. This can be revenge, proving oneself, monetary gain, etc.

What is an example of character motivation?

An example of character motivation is in "The Lord of the Flies." The character Ralph simply wants to survive and get off the island. Unfortunately, Ralph struggles with those who are on the island with him, but by maintaining a level mind he is able to stay alive.

Character Motivation in a Drama

How to Connect Ideas in an Informational Text

Themes in Romeo and Juliet by William Shakespeare | Analysis & Examples

Imagery in The Hobbit