Copyright
Anne Kamiya, Adrianne Baron
Explore chemoautotrophs. Learn the definition of a chemoautotroph and understand its energy sources. Discover examples of chemoautotrophs and find where they live. Updated: 02/28/2022

When energy is produced, not from eating food or nutrients, but from oxidizing inorganic chemicals, that organism is called a chemoautotroph. The chemoautotroph definition breaks down as follows: chemo means "relating to chemicals," auto means "self," and troph means "food." So, a chemoautotroph literally means something that creates its own food from chemicals.

Within an ecosystem, chemoautotrophs are vital because they are often the main, or primary producers, of food for everything else within that ecosystem. A good example of primary producers are plants. Plants are photoautotrophs. This term means they are able to create their own food from sunlight. Through photosynthesis, plants transform light energy into organic compounds like leaves, roots, fruit, and seeds for animals to eat. The herbivores that survive off of plants are called primary consumers. Even predators like lions eat the primary consumers that live off of plants to survive. Without primary producers, there is nothing for the primary consumers to eat and the entire ecosystem falls apart. The situation with chemoautotrophs is similar. They are the main producers that turn inorganic chemicals into organic compounds. Without them, the entire ecosystem would collapse. 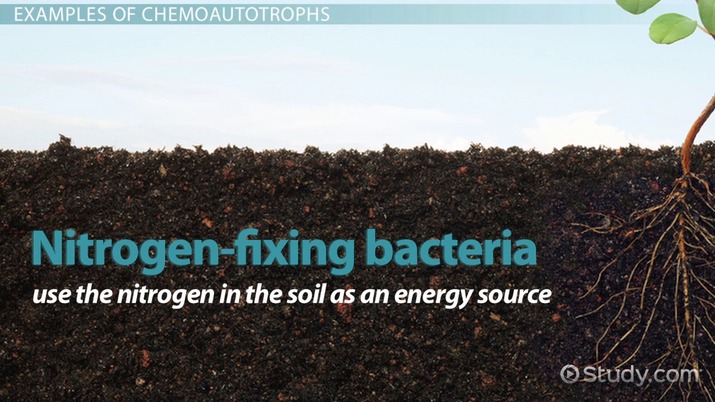 Try it now
Back
Coming up next: The Heterotroph Hypothesis: Definition & Overview

Some examples of chemoautotroph energy sources from inorganic chemicals include nitrogen, sulfur, and iron. Chemoorganoautotrophs, on the other hand, obtain energy from a variety of organic compounds and get their carbon from carbon dioxide.

Three major types of chemoautotrophic microorganisms are sulfur-oxidizing chemotrophs, nitrogen-fixing bacteria, and iron-oxidizing bacteria. They will be discussed in detail in the next three sections.

Photosynthetic organisms like algae are primary producers for the upper ocean. However, photosynthetic life cannot survive where sunlight cannot reach, beyond the epipelagic and mesopelagic zones starting at 300 meters below the surface of the ocean. Deep sea volcanic vents, called hydrothermal vents, are scattered throughout the bottom of the ocean with temperatures as high as 380 degrees Celsius. They also spew out hydrogen sulfide, an inorganic chemical pulled from the deep earth. In these ecosystems, sulfur-oxidizing archaea and bacteria oxidize inorganic elemental sulfur or hydrogen sulfide, turning sulfur into organic sulfate during the process. These bacteria are then eaten by other small marine organisms (primary consumers) like tube worms and shrimp. Chemoautotrophs are the primary producers of the deep sea and form the framework for this ecosystem.

Cyanobacteria are commonly called blue-green algae and are found in tropic and subtropic waters. They are unique because they also photosynthesize and turn sunlight into energy. Although cyanobacteria are very important for ocean ecosystems, if too many of them proliferate when waters become stagnant and nutrient-rich, they form an algal bloom. If the cyanobacteria also produce cyanotoxins, they produce a harmful algal bloom which is very toxic to any humans or animals that make contact with the water.

Iron-oxidizing bacteria get energy from oxidizing inorganic ferrous iron into ferric iron. Iron-oxidizing bacteria grow anywhere there is iron, such as vehicles, building structures, or iron-rich rivers and wells. They corrode iron-containing metals leading to rust and cause a slimy brownish gel that clogs up water storage tanks and metal plumbing pipes. They have potential use in biomining, where iron-oxidizing bacteria are used to extract metal from mineral ores. They can also facilitate the contamination of potable water with other microorganisms because they increase the content of organic chemicals in the water, which other microorganisms use to grow.

What bacteria are chemoautotrophic?

Nitrogen-fixing bacteria and iron-oxidizing bacteria are chemoautotrophic. Nitrogen-fixing soil bacteria are important for the nitrogen cycle. Nitrogen fixing bacteria in oceans, lakes or brackish water are called cyanobacteria. Although they are important to these ecosystems, an excess of cyanobacteria cause algal blooms, which can be toxic. Iron-oxidizing bacteria subsist in areas rich in iron, including plumbing pipes and water storage tanks. They can be a nuisance because of the slime and organic chemicals they produce.

What are chemoautotrophic organisms?

How does a chemoautotroph get energy?

Chemoautotrophs get energy from inorganic chemicals. They do this by a process called oxidation, which allows the chemoautotroph to extract the energy they need as electrons.

What are examples of chemoautotrophs?

Chemoautotrophs are microorganisms such as bacteria and archaea. Some examples are sulfur-oxidizing archaea and bacteria, nitrogen-fixing bacteria, and iron-oxidizing bacteria.

What is an Autotroph? | Autotroph Examples & Types

Heterotroph Overview & Examples | What is a Heterotroph?

Plasmids Characteristics & Function | What are Plasmids?