What Was the Chinese Exclusion Act of 1882?

The Chinese Exclusion Act was signed by President Chester Arthur. The passage of this act was driven by widespread prejudice against Chinese immigrants in general and Chinese laborers in particular. 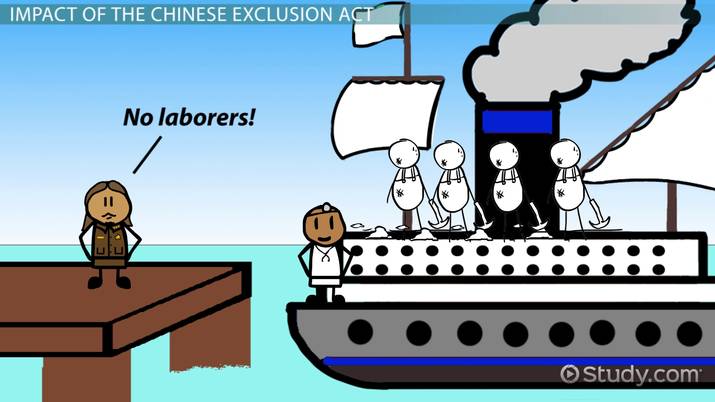 Why Was Chinese Immigration Restricted?

Why was the Chinese Exclusion Act passed? Chinese immigration to the United States began to dramatically increase in 1848 with the discovery of gold in California. People from around the world, including China, came to California to try and find gold. Many of these speculators stayed after the Gold Rush had ended, resulting in the establishment of Chinese communities along the West Coast, to the consternation of locals.

Another factor in the increase of Chinese immigration was the construction of the Transcontinental Railroad, which took place from 1863 to 1869. Thousands of railroad workers entered California to find employment with the Central Pacific Railroad. After the completion of the Transcontinental Railroad, these workers continued to labor with Central Pacific until the 1880s.

At the same time as Chinese immigrants were facing harsh discrimination, China was fighting the Taiping Rebellion. This destruction resulted in food shortages and violence in China. For the past thirty years, China had been slowly recovering from a massive famine in 1852. The food shortages brought about by the rebellion caused many Chinese to fear a reversion to those difficult times. Many Chinese fled China, and, hearing about the gold and work to be found in the United States, decided to immigrate there.

As the labor surplus grew after the Gold Rush ended, other Americans began to resent Chinese laborers and created anti-Chinese groups such as the Workingmen's Party, which connected anti-Chinese sentiment with economic and cultural arguments against Chinese immigration. These groups were fueled by nativism, the idea that established inhabitants deserve special treatment over immigrants. Many of these groups resorted to violence. Over one hundred Chinese immigrants were murdered in the last half of the nineteenth century.

Other avenues of preventing Chinese from settling in the United States were soon undertaken by regions and states before the passage of the Chinese Exclusion Act. For example, the Foreign Miners' Tax of 1850 was created by the California State Legislature to dry up Chinese miners' money reserves. Under this law, every miner in the United States who was not a citizen was required to pay a twenty dollar tax.

Another demonstration of legal action meant to deter Chinese miners was the verdict of the California Supreme Court in People v. Hall, in which that Court ruled that minority testimony, specifically that of Chinese individuals, was not to be considered sufficient grounds for any criminal charges against a white man. This decision shows the notion that Chinese individuals were thought to be less than human, and therefore not valuable to California.

What Did the Chinese Exclusion Act Do?

The Significance of the Chinese Exclusion Act

There were multiple ways Chinese immigrants resisted and circumvented the law, including:

Racism against minorities in general, and the Chinese in particular, was not finished with the Chinese Exclusion Act. Subsequent anti-Chinese immigration laws include the Geary Act (1892), which required all Chinese immigrants to present a certificate of residence to immigration officials, and the Immigration Act of 1924, which also excluded Japanese, Hindu, and Middle Eastern immigrants.

The Chinese Exclusion Act of 1882 prohibited Chinese laborers from entering the United States until 1943, when it was repealed. Since virtually no Chinese immigrants could prove that they were not in search of work. This act effectively banned all Chinese immigration. Multiple factors led to the creation of the Chinese Exclusion Act, including a struggling American economy and fewer jobs. Another factor was nativism, the idea that established inhabitants deserve special treatment over immigrants.

The historical background of the act is one of racism and prejudice against Chinese immigrants. Examples of this include:

What was the purpose of the Exclusion Act?

When was the 1882 Chinese Exclusion repealed?

The Chinese Exclusion Act of 1882 was repealed by the Magnuson Act of 1943. This act established a yearly quota of 105 Chinese immigrants.

Why did some Chinese leave China in the 1800s?

There were multiple factors for Chinese immigration to the United States. These included the Taiping Rebellion, the Gold Rush, and the Transcontinental Railroad.

What is the Chinese Exclusion Act of 1882?

The Chinese Exclusion Act of 1882 was a discriminatory act against Chinese immigration. It prohibited Chinese laborers from entering the United States.

What is the historical significance of the Chinese Exclusion Act?

The Chinese Exclusion Act of 1882 was the first of a series of discriminatory immigration policies. It also started a trend of nativism and race-based policies regarding individuals other than African Americans and Native Americans.

Mexican-American War Causes & History | What is the Treaty of Hidalgo?