Deepa Gagwani, Terry Dunn
Learn about chitin. Explore chitin structure, function, definition, and meaning. Understand where chitin is found and how it is produced. Identify chitin examples and human uses of chitin. Updated: 10/05/2021

Bugs and insects are all around us. These tiny creatures survive hostile environments due to protection from their outer coverings, or exoskeletons, which are made of chitin.

Chitin is a large polysaccharide made of modified glucose molecules. It forms the rigid exoskeleton of a beetle and the soft body of a caterpillar. The amount of chitin found in different organisms varies from species to species.

Chitin is a large, naturally occurring amino polysaccharide made of N-acetylglucosamine residues. It is the second-largest natural macromolecule found on Earth, after cellulose. It is estimated that more than 100,000 million tons of chitin is produced in the environment annually and most of it is found in the ocean. Chitin has been identified in the insect fossils found in Germany dating back to the Cenozoic era (approximately 33.7 to 23.8 million years ago) and in 505 million-year-old sponges .

The word chitin is adapted from the French word chitine, which means covering. Chitin is often mistaken to be a protein. Nitrogen content in the structure of chitin is the reason for this. However, it is not a protein. Chitin is made of amino sugars and proteins are made of amino acids. Thus, it shares structural similarities with cellulose and functional similarities with keratin. Let us take a closer look at the structure of chitin to understand this. 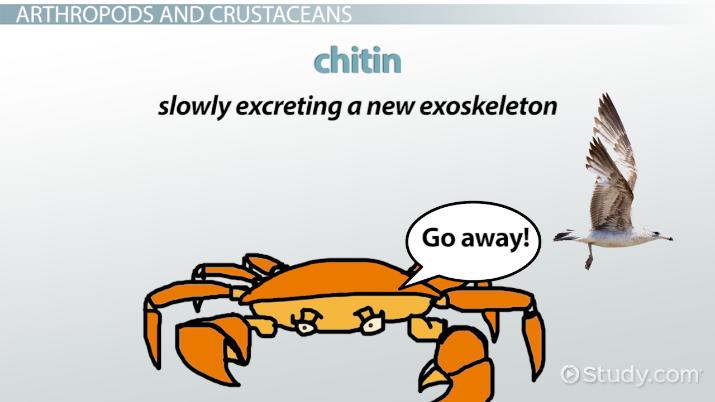 Coming up next: Types of Chordata Body Symmetry

Chitin was first discovered in 1811 by Henri Braconnot, a professor of natural history, who named it "fongine". Later, in 1823, Odier named it "chitine". In 1929, researcher, Albert Hoffman first described the chitin structure.

Chitin is an important component of the exoskeleton of eukaryotes which are generally devoid of bones. Chitin provides a protective covering to organisms that secrete it. The hydrogen bonds between the chitin monomers make it a strong material.

Alpha, Beta, and Gamma chitin are the three polymorphic forms of chitin identified from X-ray diffraction studies. The different molecular structures determine the different characteristics and functions of chitin. Alpha-chitin is the steadiest and strongest form of chitin, with its N-acetyl glucosamine chains arranged in antiparallel directions. Beta -chitin has chains arranged in a parallel direction, and Gamma-chitin has two chains that share the same polarity and one arranged in the opposite direction.

Where is Chitin Found?

Chitin can be found in large quantities in nature. It is synthesized by a variety of organisms that belong to different taxonomic groups.

The basic function of chitin is to provide structural support and protection to different organisms. It plays a crucial role in protecting animals from injury by keeping their soft body tissues covered. It also helps maintain animal shape and prevents fluid loss and tissue dehydration. Chitinous exoskeleton defends against predators, as its thick outer covering allows animals to withstand forces exerted by predators.

Chitin is a very important structural component of the fungi cell wall, helping maintain the organism's integrity, shape, and strength.

How is Chitin Produced?

In insects and arthropods, chitin is released from the epidermis to form a thick and protective layer. However, as time passes, the exoskeleton limits the insect's growth. In order to avoid suffocation, insects shed their old exoskeletons and grow new ones. Insects molt, which involves the shedding of the old exoskeleton and the regeneration of the chitin exoskeleton. Insects are especially vulnerable to predators during this period. Insects synthesize and degrade chitin in a highly controlled manner.

Chitin is translucent and tough in its pure form, but it also combines with other materials to form a strong outer structure. For example, in arthropods, it combines with proteins while in crustaceans, it combines with calcium carbonate. This material makes the exoskeleton and shells hard, tough, and stiff.

Unique physiochemical properties of chitin and new regulations from the seafood industry on dumping of crustacean exoskeletons have sparked the interest of many pharmaceutical industries for its use as a raw material. It can be extracted for industrial use through chemical and biological methods.

Several properties of chitin like flexibility, biocompatibility, scavenging, and antimicrobial properties, make it a promising biopolymer. Chitin has been widely used in cosmetics, agriculture, medicine, pharmaceutics industries and as a fiber food source.

Cosmetic and Cosmeceutical Uses of Chitin

Chitin As A Prebiotic Source

Chitin is a natural and abundant biopolymer. It is commonly found in the cell walls of fungi, exoskeletons of insects, shells of crustaceans, and in other lower eukaryotic organisms. Chitin and its derivative, chitosan have structures similar to cellulose. The main function of chitin in organisms is to provide protection and strength to their fragile bodies. It maintains body shape and prevents loss of water. Due to its biocompatibility, non-toxicity, and biodegradability, it has wide applications in the medical, agriculture, and cosmetic industries. Chitin and chitosan possess unique properties that make them ideal biopolymers with several applications. Advancements in chitin research, combined with the optimal biochemical properties of chitin and chitosan, could create even more applications in the future.

Is chitin a protein?

No! Although chitin is a polymer, it is not a protein. Proteins link amino acids while chitin links together amino sugars to form a biopolymer.

What is the chemical name of chitin?

What is chitin in biology?

Chitin is a polysaccharide of N-acetyl glucosamine, which is an amino sugar. It is found in fungi cell walls, exoskeletons of insects, shells of crustaceans, teeth of mollusks, and beaks of cephalopods.

Do humans have chitin?

What is chitin and its function?

Chitin is a natural polymer found in fungi cell wall, exoskeletons of insects, and the shells of crustaceans. The main function of chitin is to provide protection and strength to fragile bodies of these organisms.

How is chitin produced?

Cellulose Function & Purpose | What is Cellulose?

What Is Chorionic Villi? - Sampling & Definition