Joanna Tatomir, Margaret Cunningham
Learn what choanocytes (collar cells) in sponges are. Understand the various functions of choanocytes and how their structure has adapted to perform these functions. Updated: 12/28/2021

What are Choanocytes (Collar Cells)?

Sponges represent one of the first and oldest groups of animals that have evolved on Earth, first occurring in the fossil record almost 600 to 750 million years ago in the Proterozoic Eon. Relatively simple in structure, sponges encompass a variety of multicellular invertebrate animals living in aquatic environments. Invertebrate animals lack a spine, or backbone, and instead possess other forms of structural support. Currently, there are around 8,550 different species of sponges living in the world's oceans.

Sponges are important within aquatic ecosystems due to their ability to filter water through their bodies. As such, the presence of sponges in aquatic environments is essential for improving water quality in both freshwater and saltwater ecosystems. Sponges often live symbiotically with other marine animals, such as corals. Studies have shown that sponges increase the bioavailability of nutrients like carbon, nitrogen, and phosphorus for coral reefs. These nutrients are essential for ecosystem health, as autotrophs such as plankton and algae rely upon these compounds for photosynthesis, growth, and reproduction. Moreover, the presence of sponges helps to prevent changes in temperature and light, thus improving the overall productivity of the ecosystem.

Taxonomy represents a branch of science that classifies living organisms based upon their evolutionary and genetic relatedness. Sponges are classified as follows:

Four classes of sponges have been identified based upon the composition of their spicules. Spicules represent the main structural support system for sponges. These include the following classes: Calcarea, Hexactinellida, Demospongiae, and Homoscleromorpha. Class Calcarea consists of sponges with calcium-based spicules. Also known as the glass sponges, Class Hexactinellida possesses spicules that are composed of silicaceous spicules. Class Demospongiae is the most diverse of the four sponge classes, representing nearly 90% of all sponge species. Animals in Class Demospongiae typically lack spicules, and instead have a support structure formed by spongin, a special type of collagenous protein. The final group, Class Homoscleromorpha, represents the rarest group of sponges, with small spicules that attach to other aquatic surfaces, similar to barnacles.

Although sponges are multicellular, these animals do not possess tissue-level organization, resulting in the absence of organs. As such, the body of a sponge is relatively simple in structure and designed to basically facilitate the flow of water through the body. As indicated by the name of their phylum, sponge bodies consist of numerous pores, or holes, through which water enters the animal.

The outside of the animal is covered by epithelial cells known as porocytes, or ostia. The porocytes, or ostia, provide the sponge's body with channels connecting the internal and external environment of the animal. Because sponges are filter feeders, water enters through the pores, carrying with it nutrients such as plankton, algae, and oxygen. Water and other waste products leave the body through openings called the osculum. Simple sponges are vase-like in shape and contain only one large osculum, while more complex sponges often possess multiple oscula.

Each osculum leads into an internal chamber within the body of a sponge. These chambers represent the main sites for sponge filter feeding. Inside these chambers are special cells known as choanocytes. What are choanocytes in sponges? Choanocytes, or collar cells, represent a group of specialized cells responsible for nutrient intake and the flow of water throughout the animal. As will be discussed in this lesson, choanocytes, or collar cells in sponges, are essential for carrying out a number of important metabolic functions in these invertebrate animals.

As briefly touched upon earlier, the internal surfaces of the sponge's body consist of one or more chambers through which water travels. These chambers are lined by choanocytes, which serve as the main water pump for the animal. Each choanocyte contains a series of thin tubes, or microvilli, located in a ring around a central flagellum that protrudes from a round cell body. These microvilli help to filter and capture food particles. Because the interior chambers are lined with hundreds or thousands of choanocytes, the flagella work together to generate a current that carries water into the animal through the porocytes and out via the osculum. This current is generated by the coordinated movement of the flagella, which can bring in as much as a gallon of water per minute. This is equal to nearly 1,440 gallons of per day. This is essential for sponges, as they represent sessile animals, or organisms that remain attached to an immobile surface such as coral, rocks, and other sediments found on the ocean floor. 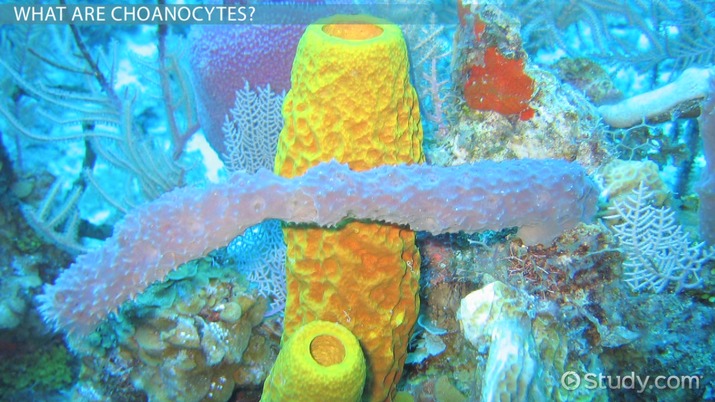 Try it now
Back
Coming up next: The Diversity of Fungi

As filter feeders, or animals that extract nutrients from water, sponges rely upon choanocytes for a number of important metabolic processes, such as respiration, egestion (or waste removal), and digestion. As the flagella draw in water through the porocytes, other substances are carried into the inner chambers of the sponge. These substances can include plant and animal matter, as well as bacteria, plankton, and algae, which are used as nutrients consumed by the animal. Some species of sponges are also capable of processing small fish and crustaceans, like shrimp, that are carried into their bodies by the choanocytes. In complex sponges, the presence of numerous chambers lined with choanocytes increases the surface area available for filter feeding.

In conjunction with the amoebocytes, choanocytes are able to process and digest food particles. In the absence of a true digestive system, sponges rely upon choanocytes and amoebocytes for intracellular digestion. Intracellular digestion refers to the breakdown of nutrients within the cells of an organism. Disposal of waste products in sponges can be carried out by both the cell types, which facilitate the movement of water and waste products out of the animal through the osculum, and by diffusion through the cell wall.

Sponges are simple invertebrate marine animals living in both freshwater and saltwater environments. Because they lack true tissues, sponges rely upon several special cell types in order to carry out their basic metabolic functions. Choanocytes, or collar cells, represent one of these specialized cells. Some sponges contain one internal chamber, resulting in a vase-like shape for the organism, while other sponges have more than one internal chamber. These chambers are lined with choanocytes. Each choanocyte consists of a round cell body lined with microvilli around a central flagellum. The microvilli help to filter water and capture food, which is processed by the animal. This form of filter feeding is accomplished by a water current generated by the coordinated movements of the flagella.

What is the function of collar cells in the sponge?

Collar cells are also known as choanocytes. These special cells are important for filter feeding in sponges, as well as in reproduction and circulation.

What do choanocytes do in sponges?

Choanocytes are responsible for a number of important metabolic processes in sponges, such as digestion, reproduction, and circulation. Choanocytes help sponges to filter out nutrients from the water. In some species they are also capable of transforming into spermatocytes used to fertilize ova from other sponges.

Which animal have choanocytes in their body?

Sponges represent a group of invertebrate animals containing more than 8,550 different species on Earth. Choanocytes are found primarily in sponges.

What is the scientific name for collar cells?

Collar cells are known scientifically as choanocytes. Choanocytes consist of microvilli and flagella that generate a water current responsible for circulating water throughout the sponge.

What are choanocytes in biology?

Flatworms Characteristics & Examples | What Are Flatworms?

What is Apoptosis? | Overview, Pathway & Examples

Flatworms Characteristics & Examples | What Are Flatworms?

What is Apoptosis? | Overview, Pathway & Examples