Cells are the basic units of life and make up all living things. Although there are different types of cells, all cells have some features in common. One example is the presence of a cell membrane, also known as the plasma membrane. The cell membrane is a thin, flexible barrier that separates the cell from the environment. It controls what enters and leaves the cell and allows the cell to be selectively permeable. Cell membranes are important because they allow the cell to create a stable set of internal conditions, called homeostasis. This allows the cell to remain in balance despite a changing external environment.

Cell membranes are primarily made of lipids, macromolecules that are hydrophobic and contain chains or rings of carbon and hydrogen. There are several important lipids that make up the cell membrane, including:

Phospholipids make up most of the cell membrane, with cholesterol added in between. Glycolipids are lipids that have sugar molecules attached to them and can only be found on the external surface of the membrane.

There are four main types of phospholipids in the cell membrane, including:

Each one has a slightly different structure, making them positively or negatively charged. This can impact the way the cell membrane interacts with other molecules. Other phospholipids are also present in smaller quantities. For example, inositol phospholipids are present in very small quantities in the membrane, but are very important in cellular signaling.

Due to energetic favorability, when placed in water the phospholipids will naturally assemble into a bilayer with the heads facing the inside and outside of the sphere and the tails sandwiched in the middle. This shields the hydrophobic tails from interactions with the water. This is the most energetically favorable arrangement of the phospholipids. It also helps create a highly selective barrier where only very small and uncharged molecules, like oxygen or carbon dioxide, can pass directly through the membrane. Other molecules require proteins that can be tightly regulated by the cell. 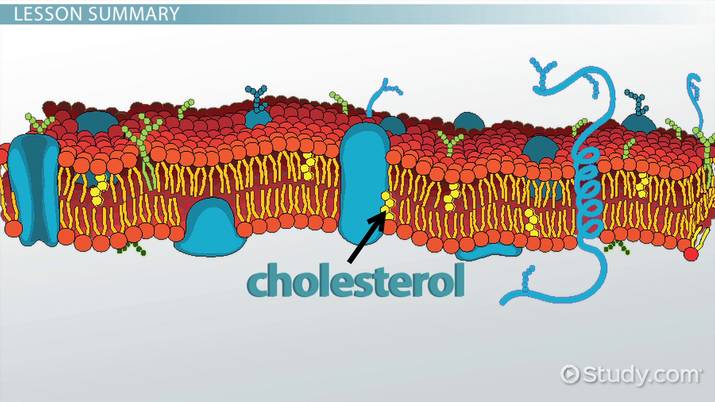 Coming up next: What Is the Function of the Nucleus in Eukaryotic Cells?

What is The Function of Cholesterol in The Cell Membrane?

The cell membrane is a thin, flexible barrier that protects the cell and separates it from its environment. The cell membrane has a bilayer structure made of two layers of phospholipids. Phospholipids are lipids that have a hydrophilic head and a hydrophobic tail, called an amphiphile, since it is both attracted and repelled by water.

What is the function of cholesterol?

The function of cholesterol in the cell membrane is to stabilize the interactions between the phospholipids and prevent the membrane from getting too fluid or too flexible.

How does cholesterol stabilize the cell membrane?

Cholesterol stabilizes the cell membrane by forming interactions with the phospholipid tails and heads. This makes their structure more rigid and helps provide stability.

ADP Overview & Structure | What is ADP in Biology?

Chromatin Function & Description | What Is the Function of Chromatin?

Glycoprotein in the Cell Membrane | What is Cell-Cell Recognition?