Who Was Christopher Columbus?

Christopher Columbus is known worldwide by many names: Cristoforo Colombo in Italian or Cristóbal Colón in Spanish or Christóvão Colom in Portuguese.

Christopher Columbus was an Italian explorer that sailed west in search of a trading route; his ambition changed the world. Columbus is credited with discovering the Caribbean and subsequently South America; his discovery began the European colonization of North and South America.

Columbus apprenticed under his father as a merchant but was fascinated by the Mediterranean and Aegean seas. Records indicate that Columbus began his seafaring career at the age of 14. He sailed on merchant vessels throughout the Mediterranean, Europe, and West Africa for most of his young adult life. Columbus attended the prestigious Prince Henry's School of Navigation in Sagres, Portugal which sharpened his naval skills. Most of his education was self-taught. Columbus was a skilled navigator, cartographer (mapmaker), and maritime explorer.

In 1479, Columbus married a young woman named Felipe Perestrello e Monis, who came from a prominent Italian-Portuguese family. The two had a son named Diego born in 1480. The marriage gave Columbus prestige and connections in the Portuguese court. Felipe died in 1485 for unknown reasons.

Columbus later had an illegitimate son, Fernando, in 1488 with his long-time mistress Beatriz Enriquez de Arana. Fernando was later legitimized by Columbus. 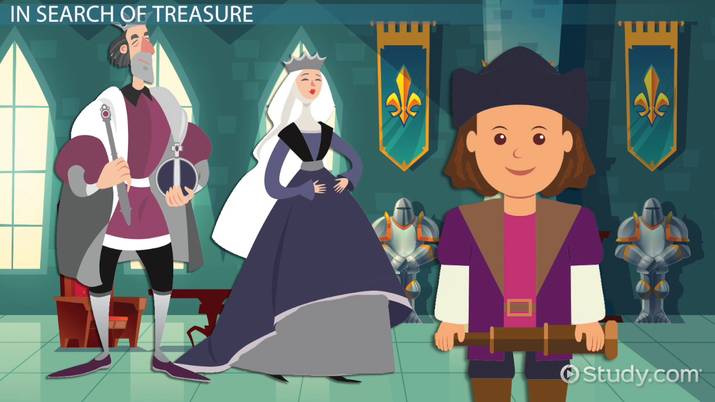 Coming up next: Covered Wagon Facts & History: Lesson for Kids

After the death of his wife Felipe, Christopher and his son moved to Spain and began to campaign for funding. Columbus was in search of a quicker trade route to India. India was an exotic land plentiful in gold, spices, and silk. The existing trade routes that he sailed from 1482–1485 were long and dangerous. Based on his seafaring experience Columbus began to speculate that if he sailed west, he would land in India. This implied that the earth was round, not flat. Columbus made many calculations that the revolutionary idea seemed far-fetched and both the Spanish and Portuguese monarchs rejected Columbus's request for funding.

After multiple attempts, Columbus accomplished his goal; in 1492 King Ferdinand and Queen Isabella of Spain agreed to fund his voyage. On April 17, 1492, the Capitulations of Santa Fe was signed. This was a royal contract that officially sponsored Christopher Columbus and gave him authority to claim any discovered islands or land on his journey on behalf of Spain. The Spanish Crown granted Columbus the title of Viceroy and Admiral of the Sea. The document also allowed Columbus to become governor of any islands he may discover on his journey. In addition, Columbus was granted authority to implement an encomienda (forced labor) system over indigenous people he encountered on behalf of the Spanish Crown. The document also outlined that Columbus would receive a percentage of all riches acquired on his voyage.

In August of 1492 three ships, nicknamed the Niña, the Pinta, and the Santa María, left Spain under the command of Christopher Columbus. The ships headed to the Canary Islands where they rested and restocked supplies. They left the Canary Islands on September 6, 1492, and the ships headed west into the Atlantic Ocean. This was not an easy trip for the sailors; water and food supply were a constant struggle and men died from spoiled food. The ships sailed for five weeks until spotting land on October 12. Columbus made landfall on an island he named San Salvador. Most likely, this was present-day Watling Island. This is the date recorded when Columbus did discover America. The natives of the islands were friendly but offered no spices or gold. Instead, they offered colorful parrots as trade. Columbus believed that he had reached India and began to, incorrectly, call the inhabitants Indians. The term Indians would soon refer to all native people encountered by the Europeans.

Columbus and his crew set sail again and landed in present-day Cuba; Columbus believed he had landed in China. In December Columbus and his crew landed in present-day Haiti and the Dominican Republic. Columbus called the island Hispaniola thinking it could be Japan. Believed to be on the island of Haiti, Columbus established the first European settlement in the Americas: Villa de la Navidad, meaning Christmas town. The exact location of this first settlement remains unknown. Records indicate that Columbus discovered the island on Christmas morning thus naming the settlement. Columbus left 39 men at the settlement and returned to Spain on January 16, 1493, claiming he had found passage to Asia.

Columbus and his flagship returned home on March 15, 1493, and were greeted with celebration. Columbus's accomplishments brought prestige and fame to Spain. The Spanish Crown quickly organized a second expedition with seventeen ships that set sail in September 1493. The second voyage included clergymen with the intention of bringing Christianity to the native people. Columbus's goal was to begin establishing colonies for Spain and to return with gold. The second voyage led the fleet to the islands of Dominica, Puerto Rico, and Jamaica. Columbus established Spanish colonies along the coast of Hispaniola where he was named Governor.

When Columbus returned to Villa de la Navidad he found that the settlement had been destroyed and all of the men had been slaughtered. Although the exact details of their demise are unknown this began animosity between the Natives and Europeans.

Columbus continued his exploration of what he believed was Asia; he navigated two more voyages. The voyages led him to the island of Trinidad, Panama, and eventually to the eastern coast of present-day Venezuela. On the expeditions, Columbus encountered hostile natives, capturing and killing many. Many of the colonies forced the natives to search for gold.

Christopher Columbus died on May 20, 1506, in Spain at the age of 55, believing he had sailed to the Far East. Columbus's voyage to the New World opened the door between the continents.

Why Is Christopher Columbus Important?

For centuries Christopher Columbus was a celebrated hero for discovering the Americas. The Americans were only new to the Europeans, as Amerindians had lived there for centuries prior. Historians have also confirmed that Columbus was not the first European in the Americas. Who discovered the Americas? Evidence shows that it was the Vikings who discovered North America nearly 500 years before Columbus sailed west. In recent years, scholars have pointed out that the arrival of Columbus began a series of events that led to the decimation of native populations and the colonization of stolen land.

Christopher Columbus was in search of a faster water route to India in hopes of trading spices and silk. After several attempts, the Spanish King Ferdinand and Queen Isabella finally agreed to finance Columbus's voyage. The voyage was not an easy one. One challenge was keeping food fresh and plentiful on the long journey. Sailors often suffered illnesses from eating rotten food. When Columbus landed on Watling Island and Hispaniola, he did not find spices or silk, rather the natives traded the exotic parrots. In recent years, scholars quickly pointed out the negative impact of Columbus's discovery. Scholars argue that he was not a hero to be celebrated, but rather a man who, as being responsible for the conquest of North and South America, stole land and riches and wiped out indigenous populations. Columbus's voyage was of great value to European nations, while the expeditions imposed devastation on native nations.

What is Christopher Columbus really known for?

Christopher Columbus is mainly known for sailing west and landing in Caribean. For centuries he was known for "discovering" America.

How did Columbus discover America?

Christopher Columbus charted ships through the Spanish Crown for his exploration. Columbus sailed his ships west into the Atlantic believing he would find Asia.

The Americas existed before European colonization, therefore no discovery was needed. The Vikings were the first Europeans to cross the Atlantic Ocean and land in North America.

How to Find the Point of Intersection | Algebra & Graph Methods

Overview of Ethnic Groups in the World