Where Is the Ciliated Epithelium Found?

The digestive tract also contains simple columnar epithelial cells and mucus secreting goblet cells. These cells also have hair-like projections. At first glance, the epithelial tissue here, and within the respiratory tract, may appear very similar. However, the hair-like projections on the digestive epithelium are called microvilli, and they are specialized for absorption, not the movement of particulates.

What Is the Function of the Ciliated Epithelium?

The shape and location of ciliated epithelium gives hints about its function. Consider the respiratory system. This system works to take in fresh air and exchange it with spent air. Oxygen is taken into the body and waste carbon dioxide is expelled. The air composing the external environment is not composed of pure oxygen; there are also a number of microbes and particulates that are taken in during inhalation. Build up of these irritants can decrease the efficacy of the respiratory system, damage respiratory tissue, and introduce pathogens. Ciliated epithelium exists within the respiratory tract to prevent this. 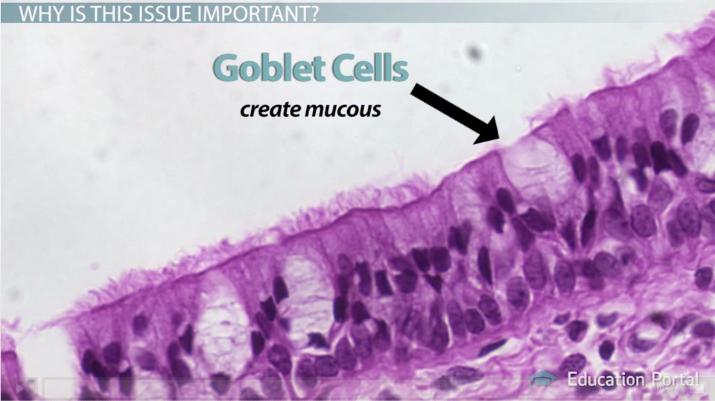 Try it now
Back
Coming up next: Human Skin: Layers, Function & Structure

When small particles enter the respiratory system, they get trapped in the mucous that lines major airways. This mucous is produced by the goblet cells that are embedded within the ciliated epithelial cells. The cilia lining this epithelium is mobile and can bend and move. Small structures called microtubules bend and straighten depending on the presence of motor proteins. The bending and straightening of cilia works to move mucous and the subsequently trapped particulates up the airway and away from the lungs. Once high enough into the trachea, these foreign substances can be coughed up or exhaled out.

Ciliated epithelial tissue is found within the respiratory system and reproductive tract. The air is full of particulates and microbes (such as dust and bacteria), which are dangerous when inhaled. These particulates become trapped in the mucous produced by goblet cells. The movement of the cilia on ciliated cells function to move these trapped particulates away from the lungs, where they can be coughed up and expelled from the body. Within the reproductive tract, cilia work alongside muscular contractions and secretory fluid to assist with the movement of eggs, sperm, and fertilized eggs within the female fallopian tubes.

What is ciliated epithelium tissue?

Where is ciliated epithelium found?

Ciliated epithelial tissue is found in two locations within the body. In the respiratory system, it lines the trachea and respiratory bronchioles. In the female reproductive tract, it composes the lining of the fallopian tubes.

Bacterial Structures and Their Functions

The Placenta and the Fetus: Structure and Function