What is Citizen Journalism?

Citizen journalism, sometimes referred to as participatory journalism, can be defined as news gathered and reported by everyday citizens (nonjournalists) not employed by news organizations, such as newspapers, magazines, broadcast television, and radio. This form of news is often presented through social media platforms, such as Facebook and Twitter. One of the popularly used tools by citizen journalists are smartphones. Citizen journalism can be broken into six types: audience participation, independent news or information websites, participatory news sites, collaborative and contributory news, thin media, and personal broadcasting sites. Some say that citizen journalists are commentators that originally discovered American journalism. The legacy or traditional news follows the format of "one provider to many consumers;" however, citizen journalism provides more sources for information.

The six types of citizen journalism can be defined as follows: 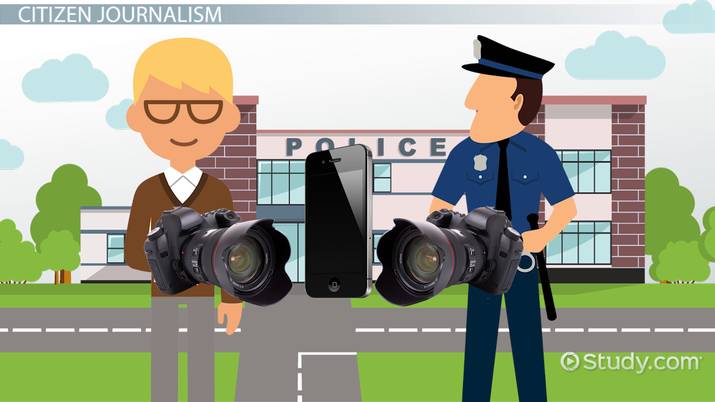 Try it now
Back
Coming up next: Citizen Journalism: Advantages & Disadvantages

The importance of citizen journalism is that it is intended to bridge the gaps created by traditional news outlets and create more sources of information. The main goal of citizen journalism is to reach local communities with news that even local newspapers and broadcast stations are unable to get to. The target audience for citizen journalism are those that do not feel as though regular news sources have adequately served them. Think about it, more often than not a witness of something newsworthy will record and post of their experience on a social media platform before any news outlet has even been able to get their hands on the story. Without even realizing it, this person has just participated in citizen journalism.

The internet has created a platform for citizen journalism to thrive. Sites such as YouTube and SoundCloud have made it possible for people to reach a broader audience and voice their story through video and audio production.

These same platforms have even created a new way for politicians to reach their target audience during elections. During the 2016 U.S. presidential election, businessman and Republican Party member Donald Trump ran against former Secretary of State and Democrat Hillary Clinton. Both party members participated in campaign advertising via social media platforms, such as Facebook and Twitter. Both social media sources also broadcast presidential debates in real-time. The videos were later posted to these sites where a person could go back and watch them, along with posts made by the politicians themselves. Through these social media platforms citizen journalism is able to create a public archive of information to help voters make a more informed decision during election season.

The following are examples of citizen journalism:

Abraham Zapruder is remembered for having recorded the assassination of President Kennedy with his home move camera. This is one of the first notable instances of citizen journalism. The assassination of President John F. Kennedy took place on November 22, 1963 in Dallas, Texas. The film, only 26 seconds in length, unexpectedly captures the president's assassination. This footage was paramount in the investigation that followed the president's death. Before this incident, Zapruder was your everyday citizen, but because of what he captured that day, he became a pioneer in the field of citizen journalism.

The December 26, 2004, Indian Ocean Earthquake was the cause of one of the largest tsunamis in 40 years. The majority of the images recorded were taken by everyday citizens. In a natural disaster such as this, there is little to no time to assign the task of recording the event by a major news outlet; so it is left up to citizen journalism to record this major event in history. In this particular instance, the 2004 Indian Ocean Earthquake was mostly recorded by tourists visiting the area during the disaster.

In a traffic stop on April 4, 2015, North Charleston, South Carolina police officer Michael Slager fired his weapon 8 times and killed unarmed Walter Scott, who was fleeing the scene. Originally Slager accused Scott of taking his stun gun and therefore left him vulnerable to defend himself. Bystander, Feidin Santana recorded the incident on his cellphone and the video later made its way to mainstream media outlets like The New York Times. It was this footage that led to the arrest of Officer Michael Slager, who was then charged with murder and later sentenced to 20 years in prison for the death of Walter Scott. In this example, citizen journalism was able to prove that the police officer lied about the incident and serve justice to the victim. The question does remain, what if there had been no video?

In September 2016, police were called to a local neighborhood in East Liverpool, Ohio. What the officers found left them in shock. A couple had overdosed in the front seat, with the woman's 4 year old grandson sitting in the back seat of the car. The local police department made the decision to take pictures and release the photos of the two people who had overdosed on heroin in their car on Facebook, where it received thousands of comments and shares overnight. It is this photo that shed light on the opioid epidemic that the community and many others struggle with daily. This example of citizen journalism led to the opening of resources needed in this community to help fight against this addiction crisis.

Citizen journalism is a real-time, alternative form of news collected and reported by everyday citizens. Journalism is no longer only a headline on a newspaper article or the channel you skim past on the television. It is everywhere within our reach, even on the smartphones in our pockets, which are a popular tool used by citizen journalists. Citizen journalism dates back as far as the John F. Kennedy assassination that was captured by Abraham Zapruder, a bystander, who later became known as a pioneer of citizen journalism. Since then the everyday citizen has captured natural disasters that would have otherwise had limited reporting from mainstream news sources, has benefited the legal system in making well-informed decisions, and has helped spread awareness of an addiction crisis that led to possible hope for communities.

Why is Abraham Zapruder important to the history of citizen journalism?

Abraham Zapruder unintentionally recorded the assassination of President Kennedy with his home movie camera. He later shared this footage to traditional news outlets, such as newspapers and local news stations. It is this moment of recording this unforgettable event in history that labeled Zapruder as the pioneer of citizen journalism.

What does the term citizen journalism usually refer to?

Citizen journalism is the collecting and reporting of news by everyday citizens (nonjournalists). This information is generally posted to some form of nontraditional media, such as social media sites like Facebook or Twitter, via a smartphone.

Contemporary Journalism & Its Role in Society

Contemporary Journalism & Its Role in Society