How Did the Civil War End?

The American Civil War began on April 12, 1861 at Fort Sumter and was officially over on August 20, 1866 by Proclamation of President Andrew Johnson. The war was a fight between the Union (Northern States) and the Confederacy (Southern States). Many events led to the collapse of the Confederacy and the victory of the Union. In the spring of 1865, General Robert E. Lee surrendered causing several other generals to surrender as well. A final blow was when Confederate President, Jefferson Davis, was captured and imprisoned by the Union. 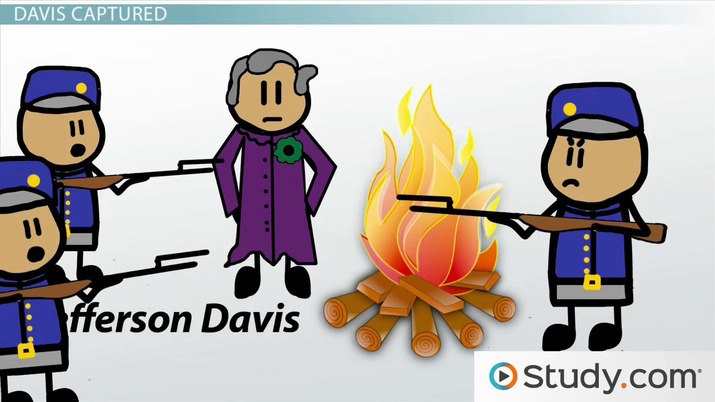 Coming up next: The Costs of the Civil War: Human, Economic & Cultural

What Ended the Civil War?

When did the Civil War end? The civil war officially ended on August 20, 1966 when President Andrew Johnson issued his Proclamation. There were many facts and events that led up to the ending of the war.

Timeline for the End of the Civil War

What Battle Ended the Civil War?

There was not one battle that ended the Civil War. It actually was the combination of several battles. The Confederacy lost multiple battles to the Union, and this caused the Confederacy to lose the war. Two pivotal events were:

The Battle of Gettysburg

The Battle of Gettysburg took place on July 1-3, 1863 in Gettysburg, Tennessee. Confederate General Robert E. Lee withdrew from the battle and retreated. This was a crushing defeat for the Confederacy, who lost over 1/3 of their soldiers and high ranking officials. This contributed tremendously to the end of the Civil War.

The Capture of Vicksburg

Military Surrenders and the End of the War

The Army of North Virginia

General Lee's surrender in 1865 marked a turning point in the war. General Robert E. Lee surrendered the Army of North Virginia to Union General Ulysses S. Grant on April 9, 1865 when he realized the Confederacy was not going to be able to break the Union lines and wanted to save the further destruction of the Southern states. This event is considered by some historians to be the end of the Civil War, since it held such a vital importance to the mentality of the Confederacy.

The Army of Tennessee

Confederate General Joseph E. Johnson surrendered the Army of Tennessee to Union General William Sherman in North Carolina on April 26, 1865. General Johnson realized that his men were no longer able to fight and his army was near total desertion. He knew his army could not take on the Union therefore resigned in hopes to save the lives of his men.

The Department of Alabama, Mississippi, and East Louisiana

Confederate Lt. General Richard Taylor surrendered his army to Union General E.R.S. Canby on May 4, 1865 after receiving word of Johnson's surrender of the Army of Tennessee.

Confederate General Edmund Kirby Smith reluctantly surrendered to Union Forces in New Orleans, Louisiana on May 26, 1865 after the Battle of Palmito Ranch. This battle was the last major battle of the Civil War. General Smith could not accept that the war was over and fought until he ultimately ran out of the resources necessary to continue.

Indian Territory consisted of five tribes with two major units that supported the Confederacy. Chief Stand Watie was the last official to surrender his army to Union forces on June 23, 1865. This was the last surrender of a Confederate Army of the Civil War.

There were several political events that led to the end of the Civil War.

Confederate President Jefferson Davis retreated into the deep south in an attempt to avoid capture after Robert E. Lee surrendered on April 9, 1865. He knew that he was in danger and fled as far as he could. He was eventually captured by a Union army on May 10, 1865 in Georgia. He was charged for treason and taken to Fort Monroe, Virginia as a prisoner of war.

His capture, combined with the surrender of high ranking officer General Robert E. Lee, is considered by many to be the end of the Civil War.

The end of the Civil War was the beginning of the Reconstruction of the Southern States, formally the Confederacy. This was a time of hostility and violence as many Southerners were resistant to any changes to their way of life. The governments of the Southern states enacted Black Code Laws that charged and imprisoned former slaves as vagrants and loiters. The Equal Justice Initiative reports that over 2,000 freed slaves were killed in lynching's during the Reconstruction Years, 1865-1867.

The main key points to consider when describing the end of the American Civil War is that no one political or military event caused the war to end. Multiple events led to the fall of Confederacy and the victory of the Union. The Civil War started April 12 1861 with shots fired at Fort Sumter. When was the end of the Civil War? The official end of the war was on August 20, 1966 by a Proclamation from President Andrew Johnson.

Why did the South lose the Civil War?

The South lost the war for many reasons that compounded together. They lost control of the Mississippi River and Atlanta GA. They lacked in financial resources and man power needed to overtake the Union.

What officially ended the civil war?

The official and formal end to the civil war came on August 20, 1866 with President Andrew Johnson's Presidential Proclamation.

How did the Civil War end who won?

The Civil War ended due to several events. Many Confederate Generals surrendered their armies and the Confederate President was captured. The Union (the Northern States) won the Civil War.

The Last 100 Days of the Civil War: Goals & Actions

The Politics of 1864: President Abraham Lincoln is Re-Elected

Civilian Reaction in the Confederacy to the War: The Impact on Daily Life & the Economy

Sherman's March to the Sea

US History Since 1940: Lesson Plans & Resources