Copyright
Louise Fisher, Jeff Calareso
Discover the classifications of triangles and learn how to classify triangles by sides and angles. Explore the properties of scalene, isosceles, equilateral, acute, obtuse, and right triangles. Updated: 01/04/2022

How to Classify Triangles

Most people are familiar with the shape of a triangle, but what makes a triangle?

Triangles are geometrical shapes defined by having three vertices, three sides, and three interior angles that sum to 180{eq}° {/eq}. Interior angles are the angles that lie within the triangle formed by the sides. Triangles are a very common shape in math and nature, however there are many different types of triangles out there due to their broad definition. How do you classify a triangle? Tell several people to draw a triangle and they may have different results.

Since triangles just have to have three sides and three interior angles that sum to 180{eq}° {/eq}, there are quite a few different combinations of side lengths and interior angles that would form a triangle. For this reason, triangles are classified or grouped up by these side lengths and angle combinations so mathematicians can easily refer to a specific type of triangle. 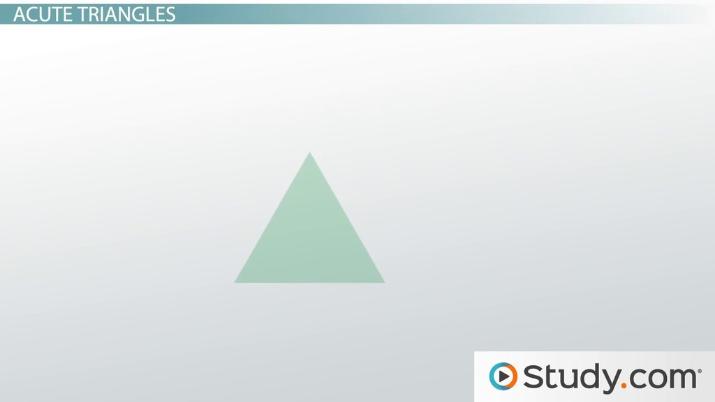 Coming up next: Interior and Exterior Angles of Triangles: Definition & Examples

Scalene triangles are triangles in which none of the side lengths are the same. For this reason, they also have three different interior angle measurements. Scalene triangles do not have a line of symmetry, meaning no matter where a line is drawn through a scalene triangle, the left and right sides of the line will never mirror each other.

Similar to how triangles can be classified by sides, triangles can also be classified by their angles. All triangles have three interior angles whose angle measurements sum to 180{eq}° {/eq}. There are a few different combinations of angles that can make this happen. Recall that there are different types of angles in geometry that are categorized by their angle measurement, including acute angels, right angles, and obtuse angles. The classification of triangles by angles are based on what types of angles are present within the triangle.

Obtuse angles are larger angles with an angle measurement greater than 90{eq}° {/eq}. When one of the interior angles of a triangle are obtuse, it is classified as an obtuse triangle.

All squares and rectangles can be divided into two right triangles by drawing a diagonal line from two of the four corners. Right triangles are used often in carpentry due to their ability to form a perfect corner with their right angle.

Classifying Triangles by Both Sides and Angles

All triangles will fall into one or more of the classifications listed above since all triangles have sides and interior angles. When determining a classification for a triangle, take note of what angles are present and how many of the sides are of equal length. They can then be put into one of the above categories based on their sides or angles.

What are two ways to classify triangles?

How do you classify a triangle by its sides?

What are the classifications of a triangle?

Midsegment Formula & Examples | What is a Midsegment of a Triangle?

How to Draw & Measure Line Segments: Lesson for Kids