The term late adulthood generally spans the time between the mid-sixties and death. Late adulthood is often divided into the following stages:

During the late adulthood stage, there are changes in the cognitive development of an individual. Cognition refers to the thinking processes of an individual that allow for the retention and comprehension of new material. The various cognitive processes include recognition, memory, judgment, problem solving, and the ability to attend to a specific stimulus for a period of time.

Cognition can be divided into the following areas:

Cognition can be further divided into 2 categories:

In general, older adults have slowed fluid intelligence. This can be seen in difficulties solving problems, applying logic, or recognizing patterns in the workforce. For example, an older adult may have increased difficulty planning for new situations and may feel stress when asked to problem-solve a work crisis. Crystallized intelligence, however, is maintained and may even be strengthened in late adulthood. Crystallized intelligence includes the knowledge of facts that remain important in the life of the individual. Cognitive aging does not affect the ability to comprehend new information, especially when the older adult avails themselves of educational opportunities or learning situations.

Many factors affect cognitive development in late adulthood, including physical changes such as hearing loss, a slowing of information processing in the brain, and increased difficulty in focusing and problem-solving ability. The comprehension of new facts is generally not affected by aging. 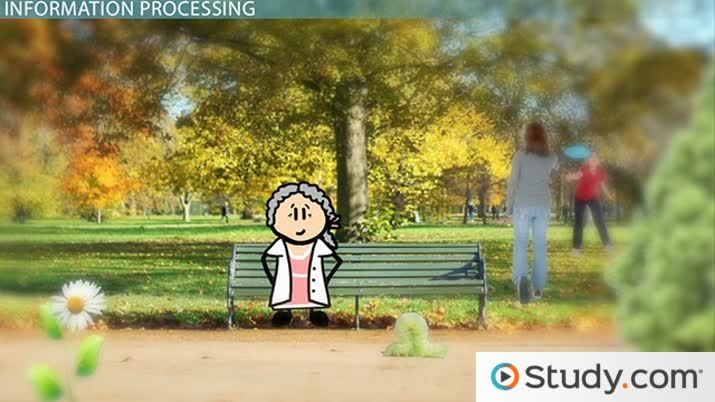 Try it now
Back
Coming up next: Influences on Development in Late Adulthood

There are many examples of cognitive changes in late adulthood. Two of the most common characteristics of older adulthood are struggles with memory and attention (focus). Cognitive aging includes processing things more slowly, finding it harder to recall past events, and failing to recall information that was once known.

For aging adults who are still in the workforce, the inability to organize activities or multi-task can affect job performance. An aging teacher, for example, may find themselves needing more time to plan curriculum, may need to write things down in order to recall information, and may find themselves less patient with students. In a business setting, an older employee may find themselves aging out of a position as technology changes and becomes more challenging.

Attention may be defined as the selective focus on a stimulus or aspect of information. The ability to attend to a stimulus is one of the cognitive changes in late adulthood. Many factors may affect the difficulty of maintaining focus. Hearing loss, for example, often accompanies aging and makes understanding speech more challenging. Since more concentration is needed to understand words, this can affect comprehension, especially in noisy settings. As difficulty with memory increases, maintaining focus can also be affected because of the confusion that may result from the memory loss. Difficulty attending can affect work performance and also social skills. Decreased ability to focus may be observed in an aging individual's loss of interest or inability to follow a conversation. This, in turn, affects relationships and the perception of intelligence that others may have regarding the individual.

Memory can be divided into two categories: implicit and explicit.

Explicit memory, also called declarative memory, involves conscious thought and recall. This information must be consciously brought to the attention of the individual in order to be used. Examples of declarative memory include recalling historical events, remembering the time of an appointment, or recalling items on a grocery list. Explicit memory typically declines with aging.

Implicit memory is a type of long-term memory that does not rely on conscious retrieval of information. The unconscious aspect of implicit memory helps the elderly to maintain daily life functions by allowing them to maintain familiar routines and function in familiar environments as they age. For example, an elderly individual may be able to maintain their independence by following familiar daily routines and daily schedules that do not require problem-solving or a great deal of planning.

Procedural memory is an aspect of long-term memory that allows the individual to know how to use previously acquired skills to learn new skills. Evidence suggests that elderly people's procedural memory is unaffected. Most aging adults can recall previously learned skills and can develop new abilities. Some skills that would use procedural memory would include activities such as learning to drive, riding a bike, cooking, or getting dressed in the morning.

Wisdom may be defined as the ability to apply lessons learned from past experiences to present-day situations. Two approaches are common when seeking to define and cultivate wisdom. The implicit-theoretical approach seeks to define wisdom according to society, folk definitions, and usefulness within a culture. The explicit-theoretical approach approaches the study of wisdom through scientific study and analysis. Wisdom affects the life of an individual in multiple areas. Socially, an aging individual who is characterized as wise is better able to maintain relationships and may be sought after by younger individuals for advice. Biologically, an aging individual with wisdom has a greater tendency to care for themselves and maintain healthy lifestyle choices. Psychologically, wisdom allows an aging individual to appropriately assess their emotional needs and make changes as needed.

Two areas particularly affected by aging are attention and memory. Attention, or the ability to focus on a stimulus, is often affected in late adulthood. Physical factors, such as hearing loss, fatigue, or a physical ailment, may also make it more difficult to attend to a situation. Cognitively, as difficulty with memory increases, the ability to focus may decrease. Memory is another cognitive area often affected by aging. Explicit memory, also called declarative memory, involves conscious thought and the recall of information. Explicit memory typically declines in late adulthood. Implicit memory is the unconscious recall of familiar events or activities within the environment of the individual. Procedural memory, a form of implicit memory, involves the use of previously acquired skills to learn new skills. Implicit memory, including procedural memory, is not typically affected in the aging population. The acquisition of wisdom in late adulthood is the ability to apply information learned through past experience to present situations. The implicit-theoretical approach defines wisdom within a cultural and societal context. The explicit-theoretical approach looks at wisdom through the lens of scientific study and analysis. Although cognitive development in aging adulthood usually results in a weakening of many cognitive functions, a healthy lifestyle may prevent or delay this decline in late adulthood.

What is a cognitive change that happens with aging?

The most obvious cognitive changes in late adulthood are observed in declining performance on cognitive tasks that require an individual to process information quickly or use information in decision-making.

What happens to cognitive development as we age?

Cognitive development is affected by aging, especially in the areas of attention and memory. Cognition changes in older adulthood are often characterized by processing things more slowly, finding it harder to recall past events, and failing to recall information that was once known.