In both biology and life science, water is a very important compound. Because water is a polar molecule it tends to stick to itself and have cohesive properties. Additionally, water is adhesive and will tend to stick to other substances, especially if they are polar. Polarity is a property of a molecule that has an uneven distribution of charge due to shared or transferred electrons. Opposite ends of the molecule will have opposite charges and act as a tiny magnet to molecules like it. Polarity is what creates water's adhesive and cohesive properties. Adhesion is an attraction between molecules of different substances, like how water sticks within the material of a napkin. When molecules of the same substance are attracted to each other they exhibit cohesion. For example, when water molecules stick to each other forming droplets.

Water isn't the only molecule that has cohesive properties. Liquid mercury is very cohesive and easily forms droplets and beads. Additionally, different states of matter will have varying cohesion. Solids tend to have highest cohesive properties, while gases have the weakest. Using water as an example, water molecules in solid ice are strongly bonded together, while water vapor has molecules that easily escape the bonds between each other. 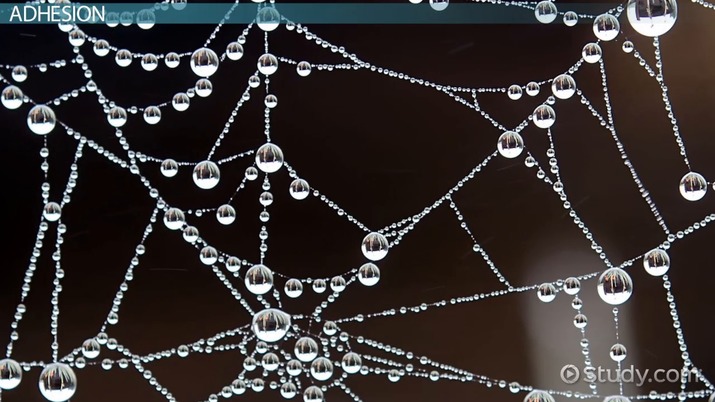 Try it now
Back
Coming up next: Introduction to Organic Molecules I: Functional Groups

Effects of Cohesion and Adhesion

The effects of water's adhesive properties can be seen when water forms a meniscus while inside a small test tube.

While water is inside a glass container like a test tube, water is observed to be sticking to and climbing up the edges of the glass, forming a concave meniscus. Water sticking to the glass is an example of adhesion, but the water that sticks to the surface of the glass pulls more water up behind it because of cohesion. This makes the water level appear concave within a test tube. In contrast, mercury atoms in liquid have stronger cohesive than adhesive properties, and therefore are attracted to each other more than the sides of the glass, creating a convex meniscus.

Water's adhesive and cohesive properties also create capillary action, where water is observed to adhesively climb up and through material it sticks to, dragging more water along with it through cohesion. The effects of this are seen as water is soaked up into a napkin. It is also how plants soak up water to fill their cells and provide some of the ingredients for the process of photosynthesis.

Why is Cohesion Important to Living Things?

Both cohesion and adhesion are important for living things. Cohesion is responsible for water's high heat capacity. Water molecules are polar, like little magnets that tend to stick to each other. Therefore, water molecules require more energy to break the bonds between them. These bonds between water molecules are called hydrogen bonds. Water is made up of two hydrogen atoms, polar-covalently bonded to an oxygen atom. Oxygen has a higher positive charge because of its larger number of protons, causing the hydrogen atoms to unevenly share their electrons with oxygen to form the chemical bond. The oxygen side of the molecule has more pull on the negative electrons resulting in the oxygen side having a slight negative charge, while the hydrogen side of the molecule has a slight positive charge. This is what causes water's polar and cohesive properties.

The hydrogen bonds between water molecules are relatively strong and require additional energy to break and pull water molecules away from each other. Therefore, liquid water requires more energy to increase the kinetic energy in water molecules enough to raise the temperature, i.e., water has a high heat capacity. This allows water to be a heat regulator within natural environments and prevent large, quick fluctuations in temperature. Water absorbs heat slowly and releases it slowly. The effects of this can be seen in the contrast between geographical climates. Both deserts and rain forests tend to be hot during the day. But deserts can have drastic drops to sometimes freezing temperatures at night. This is because of the lack of water in the desert. In a desert there is almost no humidity, so as soon as the sun goes down, the desert environment starts cooling off and releasing the heat quickly. Rainforests are very humid, on the other hand. The water in the air traps the heat within the environment throughout the night. When the sun goes down, the heat radiating back out of the environment gets absorbed and re-emitted back into the environment by water vapor in the air.

Cohesion between water molecules is also responsible for ice floating. Most substances when frozen become denser because the atoms or molecules don't have the energy to spread out. However, water's unique shape and polarity causes hydrogen bonds to create a hexagonal-crystalline-structure when the temperature is reduced to freezing. When water molecules don't have enough energy or heat to escape each other's attraction and slide past each other or expand away from each other, they lock into place forming solid ice. The result of the hexagonal structure that the hydrogen bonds of water molecules create causes ice more volume than liquid water, causing it to expand upon freezing, becoming less dense. Solid water being less dense than liquid water is responsible for the existence of thermohaline currents in the ocean caused by melting ice into cold water that sinks. Also, because ice floats, bodies of water do not normally completely freeze from their surface to their bottom, which allows aquatic life to continue to exist underneath the ice.

The cohesion and adhesion properties that result in capillary action are responsible for the functioning of plant life. The internal structure of plants acts as a sponge, in which water's adhesion and cohesion do the work. Water's adhesion allows it to stick and climb up the spongey inside of a plant, while its cohesion causes individual water molecules to stick to each other, dragging more water up through the plant behind each molecule. This is also the principal phenomenon that explains how lamp wicks work. Oil can soak into certain materials and move up filling the empty space within the material.

Adhesive properties are common in everyday technologies like glue, paint, cement, and pen ink. These substances stick to other substances and perform the function of binding things together. Additionally, the pollen of flowers tends to be adhesive and sticks to insects as they extract nectar, resulting in the insect transporting the pollen to other flowers and contributing to the sexual reproduction of those plants.

What is the Difference Between Cohesion and Adhesion?

Overall, the adhesive and cohesive properties within nature are important for the functions of living things and their environments. Adhesion is the attraction between the molecules of two different substances, while cohesion is the attraction between the molecules or atoms of the same substance. Water is a compound and substance that exhibits adhesive and cohesive properties due to the polarity of water molecules. Water is made up of two hydrogen atoms and one oxygen atom. The oxygen atom has more protons and therefore a stronger positive charge. When the oxygen forms a covalent bond with two hydrogen atoms, it has a stronger pull on the shared electrons. Therefore, the negatively charged electrons shared between the atoms are in closer proximity to oxygen making that side of the water molecule negatively charged, while the hydrogen side becomes slightly positive. Water's polarity results in hydrogen bonds between separate water molecules, where the hydrogen side of one water molecule is attracted to the oxygen side of another water molecule. Hydrogen bonds and cohesion within water results in water having a high heat capacity; i.e., it takes more heat and energy to add enough kinetic energy to individual water molecules to separate them. This allows water to absorb more heat energy without significantly increasing its temperature. Water's cohesion is therefore very important in the regulation of climates in nature. Additionally, the adhesion and cohesion of water allows plants to soak water up into their cellular systems through capillary action in order to fill their cells with water and perform their functions like photosynthesis.

What is an example of cohesion?

An example of cohesion is the hydrogen bonds that form between water molecules. Water tends to stick to itself which results in the formation of droplets. Additionally, water's cohesion results in surface tension which allows some insects to walk across the surface of water.

What are adhesion and cohesion?

What is an example of adhesive forces?

An example of adhesive forces is the attraction between glue and paper. As well, water is adhesive and tends to stick to the sides of a glass. Water's adhesion and cohesion results in capillary action and the formation of a concave meniscus inside a test tube.

Adhesion of Water Examples |What is Adhesion in Water?

Cohesion of Water Example | What is Cohesion in Water?

Colloid Mixture, Examples, & Characteristics | What is a Colloid?