What is Community Corrections?

Community corrections, also known as deinstitutionalization, are programs that manage criminal offenders outside of correctional facilities and in the community. Community based corrections are strategies that decrease expenditure on corrections, decrease the rates at which there are repeat offences, and reduce overcrowding in correctional facilities. In fact, community-based corrections was a response to the level of overcrowding in prisons in the 1960's. At that time, physical abuse was rampant in prisons and there were little to no accommodations made for inmates who were mentally ill. The rates at which released inmates would reoffend were also very high. A community correction order (CCO) is a sentence that is imposed by a judge allowing an individual to serve their sentence in the community.

Community corrections is often geared at restorative justice. Restorative justice refers to restitution by the offender in different forms. Offenders may be sentenced to community service, ordered to pay a fine, or complete other duties. For example, an offender whose crime is the destruction of property with graphite may be ordered to restore the defaced premises. 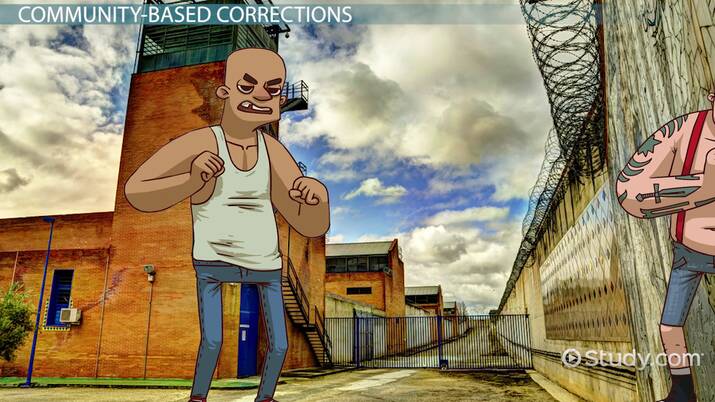 Try it now
Back
Coming up next: Prison Gangs: History, Types & Statistics

There are a wide range of community-based corrections programs that are aimed at rehabilitating offenders and decreasing recidivism, or the tendency of a relapse or reoffend. Different types of community corrections have different target groups, but all are geared toward helping individuals with reintegration.

Halfway houses are transitional community-based facilities that help to reintegrate people with criminal histories back into society. The term halfway is derived from the fact that these facilities serve as a midpoint between confinement in lockup (or a rehabilitation facility) and independent living. Halfway houses are generally structured and offer a range of services including social, educational, and mental. They accommodate people with substance abuse disorders, criminal offenders, and mental illnesses after institutionalization.

Halfway houses for addicts are typically called sober living homes and have a structured drug and alcohol testing program, curfew, and other rules that help to ensure a successful transition. They usually house people who have gone through a medical detoxification program and non-violent offenders who have jobs and travel to and from work. Halfway houses are designed to be accessible to the community and offer a support system that is often limited at home. For example, there are usually counsellors on staff to help residents with problems that they have.

House arrest is a community-based corrections program that confines an individual to their residence or restricts travel instead of placing them in lockup. Individuals on house arrest are typically able to work or leave their residence for medical or probation appointments. Electronic bracelets are typically used to track the whereabouts of these individuals and monitor any violations that may occur. Bracelets are usually GPS monitoring devices. Individuals are assigned to someone who supervises them and ensures that they are compliant. House arrest is often reserved for misdemeanor cases and the length of the sentence is dependent on the crime that is committed. There are several forms of house arrest, some less restrictive than others. For example, curfew stipulates a specific time of the day that an individual has to be home while the more restrictive home incarceration requires them to be home at all times.

Probation refers to the suspension of a prison sentence or more severe law enforcement actions if an individual agrees to comply with a period of supervision. The type, length of time, and conditions of a probation sentence are usually dependent on the offense that was committed. Probation often involves restrictions on where a person can go or who they can communicate with. It may also involve drug and alcohol testing and regular meetings with a probation officer. It may also involve payment of fines, or the enrollment in a mandatory rehabilitation program. Probation violations can be met with warnings or probation hearings. Consequences of a violated probation includes jail time, severe fines, or a revoked probation.

Community corrections, also known as deinstitutionalization, are programs that manage criminal offenders outside of correctional facilities and in the community. Prison overcrowding gave rise to the increase of community-based corrections in the 1960s. Halfway houses typically house non-violent offenders, frequently have counselors on staff, and offenders are allowed to usually travel to and from work. In work release programs, the offender may leave the prison during the day to attend a job in the community. Study release programs allow offenders to leave the prison to pursue educational or vocational opportunities. Both are aimed at increasing the skill level of inmates so that they have a smoother transition into the community and increased job opportunities.

A community correction order (CCO) is a sentence that is imposed by a judge allowing an individual to serve their sentence in the community. Under house arrest, an offender serves his sentence at home while wearing a GPS monitoring device. Probation refers to the suspension of a prison sentence or more severe law enforcement actions if an individual agrees to comply with a period of supervision.

What is the most common form of community corrections?

Probation is the most common form of community corrections for convicted offenders. Probation refers to a period where offenders are under strict supervision.

What elements make up community corrections?