The Compromise of 1850 was a suite of acts passed by the United States Congress in an attempt to keep the peace between free and slave states. It consisted of five acts that collectively established the social and geographical boundaries of slavery in America. The five acts were the following:

While the compromise managed to maintain political peace for another decade, these bills evidenced the massive division between north and south. 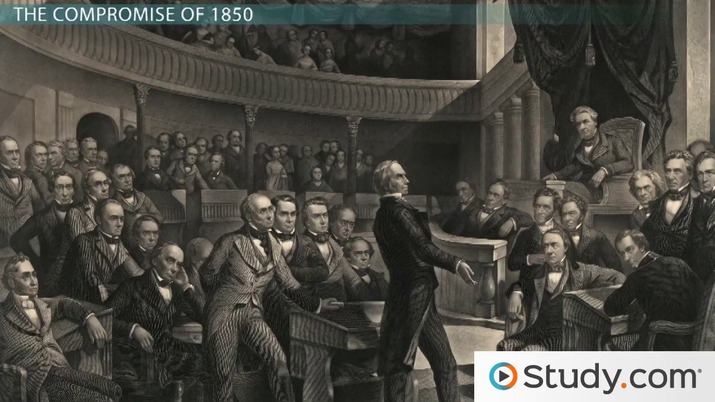 Coming up next: President Franklin Pierce's Politics and Economics

The Compromise of 1850: Background and Context

The Compromise of 1850 was modeled on previous bills passed in Congress that included multiple provisions to facilitate compromise between opposing factions. The issue of slavery had divided American politicians since the nation's founding, but the division proved almost possible to bridge by the mid-1800s. A previous compromise had been reached in 1820 to set a boundary for where slavery would be legal as the nation expanded. However, the issue of abolition proved too volatile to be confined within geographical borders.

The Missouri Compromise of 1820

The Missouri Compromise of 1820 was a short-lived predecessor to 1850, primarily negotiated by Henry Clay. Missouri was the first western territory to apply for statehood in 1818, but the debate proved too contentious and initially abandoned. Missouri statehood was revisited in 1820 when Clay brokered an agreement to admit Missouri to the Union as a slave state and Maine as a free state.

The final bill also stated that slavery would not be permitted north of Missouri's southern border or the 36th parallel. The Missouri Compromise set a precedent for admitting states two at a time to maintain a balance in the electoral college; in this instance, it maintained a political balance.

The Mexican Cession and the Compromise of 1850

The Mexican-American War began in 1846 over disputed territory in what is now the American southwest. As a result, Mexico ultimately ceded more than half of its territory to the U.S. The debate over whether or not slavery would be legal in this new territory began before the war ended.

Congressman David Wilmot proposed a provision that would make slavery illegal in the new territories, which would nullify the existing Missouri Compromise and deeply anger the south. The Wilmot Proviso failed, in large part because of opposition from pro-slavery Senator John C. Calhoun, and an effective compromise would not be reached until 1850.

Who Created the Compromise of 1850?

The Compromise of 1850 was orchestrated mainly by Senators Henry Clay and Stephen Douglas. Clay was confident his experience with the Missouri Compromise 30 years earlier would help him again avert a crisis over the issue of slavery. He initially hoped to create an omnibus bill that would include all five tenets of the compromise, but this idea was rejected. Douglas then took up the cause and separated each of the provisions into their acts, finally winning its passage.

The Compromise of 1850: Passage in Congress

Although Senator Clay was the engineer of the Compromise of 1850, Senator Douglas was its conductor. When Clay's omnibus bill was rejected and Douglas proposed five separate bills in its place, he began a months-long debate among his colleagues. With the assistance of Senator John C. Calhoun, Douglas was able to negotiate a five-part compromise that saw each bill pass both houses. The Compromise of 1850 was supported by northerners, southerners, and the president alike.

Millard Fillmore was elected as vice president in 1848 and became president when Zachary Taylor died in 1850. As vice president, Fillmore had come to support Clay's plan for a new compromise, but he became a vocal proponent after ascending to the presidency; the Mexican-American War issues troubled him, and he saw the compromise as the beginning of a solution.

Fillmore also encouraged the House of Representatives to pass all five bills after they had cleared the Senate. Fillmore was relieved to sign the bill into law, as he believed the Compromise of 1850 would finally settle issues between the northern and southern factions.

What Was the Goal of the Compromise of 1850?

The goal was to maintain a power balance between the north and south and ultimately avert a civil war. The issue of slavery had become so divisive that the two parties could rarely agree enough even to bring a bill on the topic to debate. Douglas and his supporters hoped the bills would do enough to appease abolitionist and pro-slavery forces.

The Compromise of 1850 solved several problems for members of Congress attempting to keep the north and south happy. The Compromise was made of five bills that limited the growth of slavery in some areas while allowing popular sovereignty to decide the issue on others. Specifically, the individual bills included the following provisions:

California as a Free State

In 1850 California applied for admission to the Union after ratifying a state constitution that prohibited slavery. Southerners opposed this admission on ideological grounds and out of concern for the future of westward expansion and the balance of power in Congress as there was no slave state to add as a pair with it.

The Organization of New Mexico and Utah

The new American territories of New Mexico and Utah were organized with land ceded by Mexico. On the advice of Clay and Douglas, the compromise allowed these new territories to decide the fate of slavery within their borders using popular sovereignty.

The new act required all free citizens to assist the alleged owners of people believed to have escaped from slavery, even in free states. Upon their capture, anyone accused of having escaped from slavery would have their case heard by an assigned commission; the only people allowed to testify before these commissions were those who claimed to own the person who allegedly escaped. The Fugitive Slave Act accommodated pro-slavery advocates and allowed many southerners to act as deputies to support the institution of slavery actively.

Abolition of the Slave Trade in Washington, D.C.

Before the 1850 compromise, Washington, D.C. had the largest market for enslaved people in the United States. This compromise made the slave trade illegal within the city but still allowed people to hold others in slavery; the bill's architects hoped to toe the line of compromise between north and south.

The effects of the compromise were varied, especially in the politically-fraught landscape of mid-19th century America. Although the legislation seemed a success at first, it inspired more extreme members of the pro-slavery and abolitionist movements to action. The compromise balanced power between the two agendas initially but fueled the abolitionist movement and allowed the expansion of slavery in the long run.

In the halls of Congress, the Compromise of 1850 temporarily balanced pro-slavery and abolitionist agendas. Members of Congress from each faction believed the legislation had been fair to the north and south, giving neither more power than the other. However, as the argument wore on, it became clear that popular sovereignty could be manipulated and the constituents of each region had become increasingly polarized.

The Fugitive Slave Act was designed to placate proponents of slavery but galvanized the abolitionist movement. Northerners who had previously revealed their status as residents of free states felt they were now required to support the institution of slavery.

Many people who had merely been bystanders before became active abolitionists. The Underground Railroad reached its height in the years following the Compromise of 1850.

Cleared Way for the Expansion of Slavery

The language of the legislation did not require any immediate action regarding slavery in the new southwestern territories; the territories were free to vote on whether or not they would permit slavery.

In the next decade, new territories throughout the U.S. would see an influx of pro-slavery and anti-slavery residents hoping to find influence through popular sovereignty. Although pro-slavery advocates initially viewed the Compromise of 1850 as a success, they later came to question how fair the territorial votes would be given so much outside influence.

The Compromise of 1850 was designed to keep the peace between the north and south during contentious times in American history. Although many believed the issue of slavery to be settled following the Missouri Compromise of 1820, it became clear that a simple geographical barrier between northern and southern states would not suffice. While the ideologues of the pro-slavery and abolitionist movements were unwavering, many in the middle felt compromise was the only way to avoid a civil war. Led by Senators Henry Clay and Stephen Douglas, a five-part compromise was proposed that would include the following:

The Compromise of 1850 initially proved effective at keeping the peace and is remembered as the last successful bipartisan negotiation over the issue of slavery, as the American Civil War erupted a decade later. However, the Fugitive Slave Act, the harshest provision in the compromise, and strengthened the abolitionist movement.

What is the Compromise of 1850 and why is it important?

The Compromise of 1850 consisted of five legislative bills concerning the issue of slavery; the legislation was designed to avoid a civil war between the north and south.

What did the Compromise of 1850 do for the South?

The legislation concerning the Fugitive Slave Act allowed slave owners to capture any people alleged to have escaped slavery, even in free states.

The major provisions of the Compromise of 1850 are as follows: the Fugitive Slave Act, the abolition of the slave trade in Washington, D.C., the admission of California as a free state.