Measurement constitutes a crucial part of research and makes the research topic understandable. Consider a researcher interested in determining if a particular therapy can be used to treat depression. There is no surety that therapy can work until it is tested. What if the researcher tried it on his friend who was depressed before, and it worked. However, it cannot be ruled that the therapy is effective as some other questions would arise. Questions like, can the therapy work on different gender from that of the individual tested? What if it only works on the person because he is from a small town? Can the same happen to people from a big city? What if the therapy never worked, and the friend only got better on his own?

These are among the questions the researcher would have to address when explaining his topic of interest to the audience. The researcher can address one question by having a group of people who underwent the therapy compared with those who did not. But then, how will the depression be measured? How will the researcher explain the difference between those who got treated and those who did not? To determine the difference, the researcher must assess the subjects' traits and compare the results with the control group. The measurement here can take into consideration many aspects of psychology, such as intelligence tests and the reactions to different stimuli.

Still, in the example, the therapy might work, and there could be vivid results that those who undertook the therapy got better than those who did not. At this level, there is sufficient proof that the therapy is effective. However, for the research, it is not enough to have evidence until the researcher develops a method to measure the level of depression and other defining factors surrounding the research. It is also clear that depression is a mere abstract, and different researchers would have different views when handling the concept. The researcher would first need to conceptualize or define what he means by depression and then operationalize how he will measure the concept.

Conceptualization and operationalization will help the researcher explain the variables he is dealing with and then develop how he will measure them. These two steps will help clarify the questions that arose earlier. Conceptualization specifically will help eliminate the vagueness in the research topic. It also helps the audience understand the parameters involved in the research. Operationalization will then present a clear image of the difference that can be seen in the variables, in this case, determining the facets of depression. 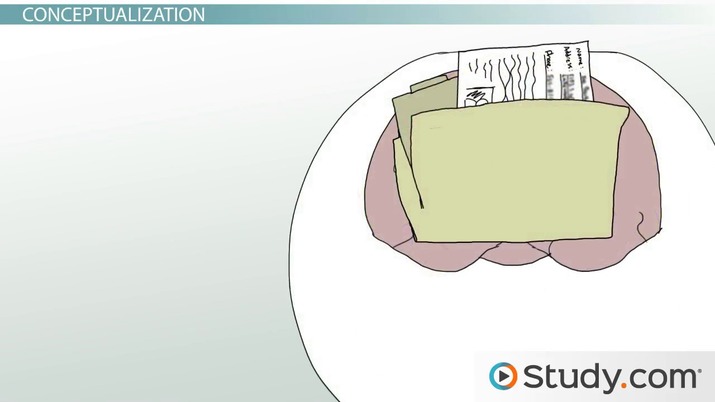 Try it now
Back
Coming up next: Continuous, Discrete & Categorical Variables: Definition and Examples

Conceptualization is an integral part of a research process since it establishes the ground for the measurement process in the given study. It is the first step in the measurement process for the research. Conceptualization helps the researcher break down the complex concepts and ideologies to a straightforward and regular perspective that a wider audience can understand.

Consider the concept of masculinity. The most common definition of masculinity is the way of life associated with the male gender. Similarly, the concept can refer to the nature or quality of a boy or a man. Another definition is the societal expectations of behaviors and roles placed on the male gender. The last definition can also vary from person to person since societal dimensions are based on cultural perspectives. Different cultures have different expectations and obligations placed on men, meaning masculinity will vary from culture to culture. Here, the researcher intending to discuss masculinity will have to define the research's standpoint on the concept of masculinity. This way, the audience will have a common understanding of the research.

Another example is the concept of social status; some people perceive the word as prestige and power. At the same time, other people perceive it as having a lot of wealth. Without conceptualization, the two groups will not have a common understanding of the research topic. To avoid misinterpretations, the researcher would first have to specify the meaning of the concept of social status. Besides, there could be slight differences in how different researchers conceptualize social status.

The researcher can identify the indicators by studying empirical and theoretical studies that have been conducted on topics similar to the current research. Such studies can also provide the researcher with specific examples of how key ideas in the study have been measured. The researcher can also choose to use similar indicators as those used by the scholarly works being referred to. Importantly the researcher can recognize the weaknesses in the methods used and improve on them. The importance of operationalization in research is eradicating vagueness and ensuring that all research variables can be observed and measured.

Measurement of variables is a crucial part of research as it presents the framework for the validity of the research. Every research tries to investigate particular abstract concepts, and many questions might arise concerning the investigated variables. To ensure that the audience understands the variables, the researcher uses conceptualization and operationalization. This way, it is possible to explain the meaning of the concepts and eventually come up with a way to measure them. Conceptualization is defining and specifying the key concepts in research to avoid misinterpretation. It also establishes the first step in the measurement process by breaking down complex concepts into more straightforward and common language.

On the other hand, operationalization involves the researcher further specifying the methods through which the concepts or variables will be measured. It is the second step in the measurement process. For example, when dealing with frustration, a researcher can operationalize the word based on the question, 'how frustrated are you?' The researcher would then include answer options like a) not in the least, (b) moderately, or (c) extremely. This way, it is possible to classify the respondent's level of frustration measurably.

What is the meaning of conceptualization?

Conceptualization involves the researcher defining and specifying the main research concepts or ideas. The aim of conceptualization in research is to eradicate the possibility of confusion that arises when the key terminologies are perceived differently. Notably, it establishes the ground for the measurement process by breaking down complex ideas into a common language.

Understanding the Time Dimension in Research

Protection of Human Subjects in Research

What is Sociological Research? - Positivist, Interpretive and Critical Approaches

Fertility vs. Fecundity: Examples & Rate | What is Fecundity?