Devon Denomme, Stephen Benz, Lesley Chapel
Learn the definition of concurrent powers and review examples. Understand how concurrent powers are delineated between federal and state governments within the US constitution. Updated: 09/08/2021

What are concurrent powers, and why are they important? Concurrent powers are defined as powers shared by both state and federal governing bodies. The powers are not exclusive and held by both levels of government. The system is part of a concept known as dual sovereignty, meaning that while states have relinquished many powers to the federal government, they also have kept some powers which they exercise in conjunction with those used by the federal government. Dual sovereignty is part of the broader two-level system of government known as federalism.

Concurrent Powers in the Constitution

These shared powers between the federal government and state governments are outlined in the U.S. Constitution. This legislation delegates that while in most cases a state government will follow the rulings of the national governing body, there are times when they may exercise concurrent powers simultaneously within the same territory on the same group of citizens. Concurrent powers may be used to keep people safe, discourage crime, or improve the economy.

Think of the concept of concurrent powers as a measure of double-insurance enforcing a rule of law. For example, taxation can be used by both state and federal governments. Both the local economy and the national economy must have a source of revenue, which gets paid through taxes--a concurrent power using double-insurance--allowing each governing body the ability to spend money and regulate the economy resulting from taxation.

Article VI of the U.S. Constitution is also known as the Supremacy Clause. This article details how the Constitution is the official governing document of the nation and when federal law comes into conflict with state law, federal law supersedes state law, making states follow the preeminent rules of the national government. The concept of federal pre-emption was created to mitigate conflict between the states and the federal government, since both may exercise similar or concurrent powers at the same time.

An example of a beneficial federal pre-emption is when federal laws established pharmaceutical drug labelling standards. This ruling required detailed drug information to be provided for healthcare professionals as well as uniformed standards for the purchase of over-the-counter drugs. Before 2006 and 1999, states individually set standards and boundaries for pharmaceutical companies and businesses to follow when informing healthcare professionals and customers of a medication's ingredients and directions. Following a trial, the federal government decided the Food and Drug Administration (FDA) would set the minimum standard for labelling medicines, ensuring all states must followed these standards regardless of their laws. Federal domain overriding state laws was established in 1787 through the Supremacy Clause of the Constitution. 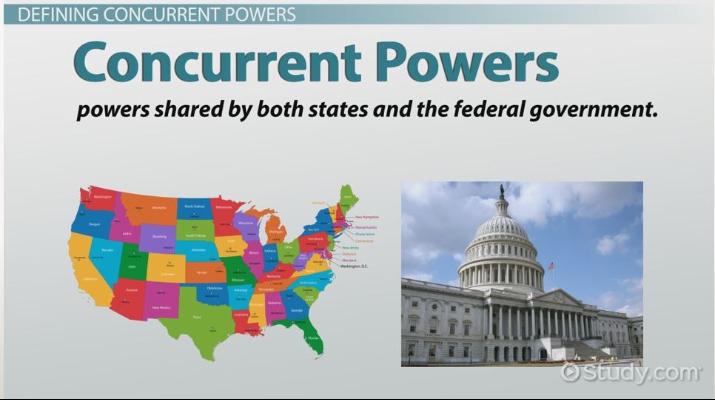 A state's exclusive rights and powers include establishing and managing school systems, creating public transit and safety systems, managing state courts, conducting commerce and trade within the state, and overseeing and managing the local government. The federal government does not typically interfere with these activities, but may choose to provide guidance to the oversight of these state operations. Federal rulings do not apply unless a state concedes their reserved powers to the federal government.

Concurrent powers are delegated in the United States Constitution. The Supremacy Clause (Article VI) states that the Constitution is the official governing document of the nation. Article I, Section 8 outlines federal powers, while the 10th Amendment gives states specific abilities that are not delegated to the federal government, known as reserved powers. These sections define individual powers, but set up the basics for concurrent powers. Abilities that both the federal government and state governments possess include levying taxes, borrowing money on credit, establishing courts below the Supreme Court, the right to define crime and set punishments, and exercising eminent domain.

Example: Concurrent powers operating under the concept of eminent domain mean that states and the federal government can take private property for public use.

In approximately two to three paragraphs, write an essay that explains concurrent powers as they relate to borrowing money. Be sure to include quantitative analysis in your essay, using figures such as those that relate to the national debt.

Example: Like the federal government, states have the right to borrow money and thus accrue debt. However, the majority of states have laws in place that ensure that the budget remains balanced.

Write an essay that describes concurrent powers as they relate to the court system and crime and punishment.

Example: States and the federal government share the power of being able to make laws and define crimes.

Create a poster, chart, or some other type of graphic organizer that explains the state and federal right to levy taxes. Be sure that your graphic organizer enumerates which types of items the federal government and the states can tax.

Example: There are federal and state sales taxes.

What are concurrent powers in the US?

What is the meaning of concurrent power?

A concurrent power is a power or authority shared by both the federal government and state governments. Concurrent powers are outlined in the United States Constitution and can be found in the Supremacy Clause, Article I Section 8, and the 10th Amendment.

Why are there concurrent powers?

Concurrent powers exist to create a balance between the federal government and state governments. They may be used to keep people safe, discourage crime, or improve the economy.

What are 5 examples of concurrent powers?

There are a number of powers that both state governments and the federal governments share. Among the most important include the ability to levy taxes (income tax, property tax, etc.), the right to borrow money on credit, the power to establish courts under the Supreme court, the right of eminent domain, and the ability to define crime and set punishments.

Strict & Loose Constructions of the Constitution