What is a Conditional Statement? 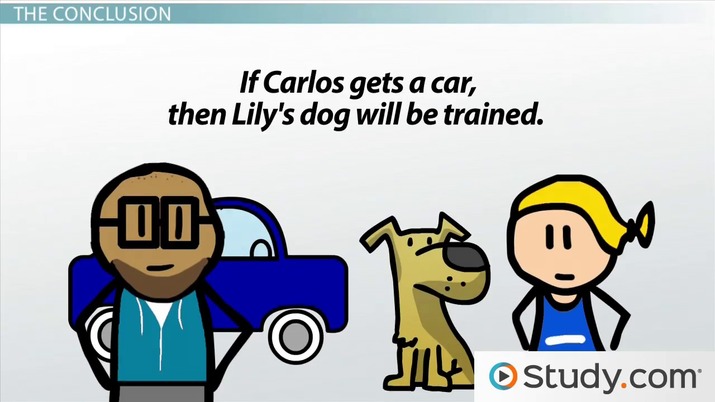 How to Write a Conditional Statement?

The question of how to write a conditional statement is not a difficult one. The first requirement is that there are two independent propositions (complete sentences). Then, the terms '"if"' and '"then"' are used in front of those propositions. Note that the meaning of a conditional statement is determined by the if and then but not their order. The proposition that follows the if is called the hypothesis or antecedent, while the proposition that follows the then is called the conclusion or consequent.

Hypothesis and Conclusion of a Conditional Statement

Conditional statements in logic are very important, since they set up the basis for many valid argument forms. A valid argument is one in which one can make an inference from premises with certainty. Or in other words, the inference necessarily follows. One of the most commonly used valid argument forms is called modus ponens. In modus ponens, a conditional statement is given along with an affirmation of the hypothesis. From these two premises, it follows that the conclusion must follow. Note that '"conclusion"' is being used in a different sense, as the proposition that follows from one or premises. Modus ponens is expressed as follows:

A conditional statement by itself does not state whether the hypothesis or the conclusion is true. It merely claims that the conclusion follows from the premise. Thus, if one wants to know whether the conclusion is true, one must figure out whether the hypothesis is true. Or in other words, a conditional statement does not immediately state anything about material reality. To return to the example, '"If Jane does her homework, then Jane will get a good grade,"' does not state whether Jane will do her homework. It merely states that if she does, then good grades will follow. It may be the case that Jane refuses to do her homework, at which point, it is unknown what her grade will be. If one wants to know what her grade will be, then the hypothesis will need to be asserted separately. An argument predicting her grade, when organized as a modus ponens would be written as follows:

How do you write a conditional statement?

What is an example of a conditional statement?

Students with Emotional or Behavioral Disorders

How to Find the Area & Circumference of a Circle

Critical Thinking and Logic in Mathematics

Altitude, Median & Angle Bisector of a Triangle | How to Construct a Median