Consequentialist ethics claims that morality is about the consequences our choices bring about. Consequentialist moral reasoning generally focuses on how these consequences affect everyone, not just the person taking the action. This means that in order to act morally, people have to act in ways that benefit the most possible people. The claim of people having a moral duty to help others is called ethical altruism. In contrast, the claim that moral actions are those that benefit themselves is called ethical egoism.

Suppose someone has more money than they need and is deciding between two options: spending the money on something that will make them happy, like buying a new car, or spending the money on something that will help others, like donating to a charity. Consequentialism would likely dictate what this person will donate the money because the overall benefit of donating to charity is greater than that of buying a new car. In this way, consequentialism leads to the position of ethical altruism. Ethical egoism, on the other hand, would result in the person doing whatever makes them happy. If they want to donate the money, they should donate it, but if they want to get a new car, they will get a new car. 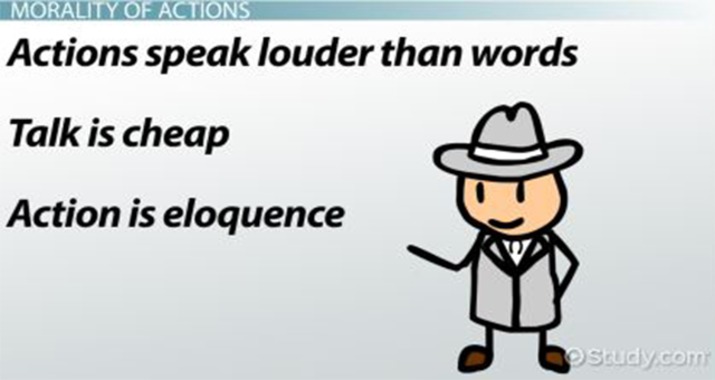 Relatedly, consequentialist views may in some situations require one person to harm another in order to help others, as long as the overall good produced is greater than the overall harm. Non-consequentialists may argue certain acts are morally wrong no matter what good they produce. For instance, they might say it is always wrong to seriously harm an innocent person even if that harm leads to some other benefit. A moral rule banning harmful actions is called a constraint.

Another relevant concept to non-consequentialist theories is moral status. The fact people have moral status means that treating them morally requires considering their interests. An is how moral status gives people the right to not be seriously harmed by others. On the consequentialist view, people's interests are considered in terms of the total goodness or badness an action produces. On the non-consequentialist view, the moral status of a given individual might override the calculation of consequences. Meaning, an action that leads to many good things might be wrong because it violates someone's moral status by harming them in immoral ways. Such a case would be an example of inviolability, which is the idea that a person has a right to not be harmed no matter what other consequences the harm would bring about.

Since the non-consequentialist view focuses on factors beyond consequences, it holds that actions producing the same consequences might not be equally good or bad. Imagine a person choosing between two alternatives that will both lead to the same amount of total happiness and suffering, but one action involves harming people in ways that violate their rights, while the other does not. For the consequentialist these options are equivalent, but the non-consequentialist would argue the two cases are different because it would be wrong for the person to harm and violate others' rights.

Suppose there are two friends. One is extremely excited about a new movie coming out soon, while the other is not interested in the movie but kindly promises the first they will go to the movie together on opening night. When the night of the movie arrives, the second friend decides on not seeing the movie, and wonders if it would be possible to just stay home and watch TV. However, the second friend already promised to accompany the first friend to the movie. Is it wrong to break the promise?

Non-consequentialist reasoning for this question can be illustrated by using the lens of deontology. A deontologist would likely say that there is a general moral rule about keeping promises. A person has a duty to keep promises unless there is some significant, extenuating circumstance. If the person was sick, for instance, then breaking a promise is allowed. However, simply not wanting to go is not a significant extenuating circumstance, so the moral choice is for the second friend is to fulfill the duty and keep the promise.

In this example, both the consequentialist and non-consequentialist views conclude that the second friend should keep the promise to the first friend, even though different reasoning were used to get there.

Here is a different scenario to consider. Suppose one day a person is pulling into the parking lot of their apartment, but they are not driving carefully and they accidentally hit their roommate's car, leaving a large dent. They know their roommate will notice the damage but will have no way of telling who caused it. Should they confess what they did to the roommate, or should they lie and say they didn't do it and don't know who did?

In this case, the deontologist would likely say the person should tell their roommate what happened because each person has a general duty to tell the truth and to admit when they have wronged another person.

The utilitarian analysis uses other reasoning. If the person lies and says they don't know who damaged the car, the total unhappiness produced in this situation will be the roommate's unhappiness at having their car damaged. If the person tells the truth, the roommate will be unhappy about their car being damaged and be upset at the roommate who was careless enough to damage the car. The person who hit the car will be unhappy that they are the target of blame, despite being responsible. Therefore, telling the truth may lead to more unhappiness than lying, so the utilitarian would argue lying is the moral choice. Of course, depending on how one analyzes the consequences, a utilitarian might also claim telling the truth has a better result since it prevents the person from feeling guilt about lying and the roommate distrusting the person if the roommate found out the person lied. Avoiding these future consequences and being honest could, eventually, lead to a more friendly and healthy relationship between the two roommates.

Consequentialism is the position that morality is determined by the outcome of good or bad consequences caused by a person's actions. A person should do whatever leads to the best consequence.

Consequentialism is a theory of normative ethics, the philosophical field that studies what actions are morally right and wrong.

Utilitarianism, a type of consequentialism, holds that we should do whatever actions lead to the most total happiness in the world. One component of utilitarianism is hedonism, which is the claim that consequences being good or bad is just a matter of the happiness or suffering they cause.

Non-consequentialists believe there are rules that should be followed regardless of an act's consequence. These rules include prerogatives, which limit people's duty to put themselves in harm's way, and constraints, which are duties forbidding certain actions.

This lesson gave you an introduction to two schools of thought that fall under normative ethics: consequentialist and non-consequentialist morality. This can be a tricky subject, but you can use the following activities to learn more.

Consequentialist and non-consequentialist views of morality have different and complex definitions. Now that you have read this lesson, imagine that you are going to teach a class explaining these theories of morality. Write down in point-form what you will say to define each view of morality, making as little reference as possible to this lesson (come back if you get stuck!). For example, think about what questions your students might ask and how you would answer them.

Now that you have heard about these two major schools of thought, which one do you think you agree with more? It's okay if you fall somewhere in between the two ideas, but give them both some thought. Think about some real life examples of each kind of morality in action. Write an essay explaining which view of morality you take and why.

This lesson briefly mentioned utilitarianism. Do some research on your own and see what more you can learn about this area of philosophy. Look up famous utilitarians like Jeremy Bentham and John Stuart Mill. Write a paragraph summarizing your understanding of their ideas. For instance, how do you feel about utilitarianism? Do you think it is applicable to our society? Why or why not? Explain your answers in a second paragraph.

What is consequentialist theory?

Consequentialist theory is a way of thinking about whether certain actions are morally good or bad. Consequentialism says that we can tell if an action is good based on whether it leads to good consequences.

What is consequentialism example?

An example of consequentialism would be if someone were trying to figure out whether it was moral to lie, and they decided based on whether the lie would have overall good or bad consequences for those involved.

Ethical Absolutism in The Concept of Morals by W.T. Stace | Relativism vs. Absolutism

Altruism vs. Egoism Behavior & Examples | What are Altruism & Egoism?