Law of Conservation of Matter Definition

Lavoisier's new theory, along with the work of countless other scientists, helped lay the groundwork for the discovery of the chemical elements and, eventually, the periodic table. It has now been so thoroughly tested and is so universally accepted, that it is considered a scientific law. 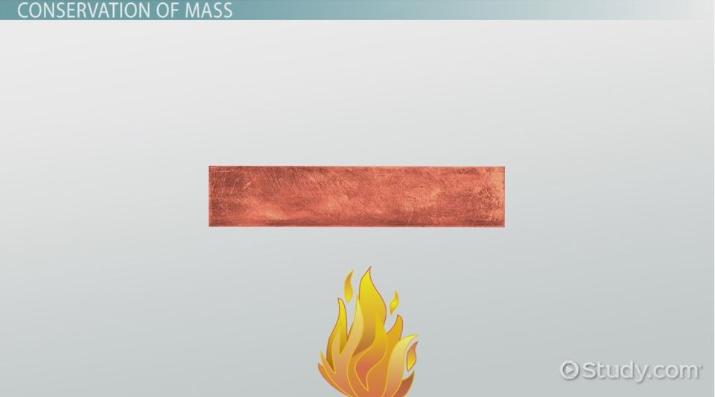 What is Conservation of Matter?

Matter is defined as physical material that occupies space and possesses mass. The phlogiston theory, which had a very long history, was built upon the observation that fuel loses mass as it burns. This is a correct observation: after you burn a piece of wood, the wood has less mass than it did prior to burning. But the phlogiston theory did not take into account the escape of gases. Burning wood releases carbon dioxide, water vapor, and aerosols.

The weighing of these gases was impossible until the invention of the vacuum pump in the 17th century. This invention allowed scientists to weigh gases and to eventually prove that mass was not destroyed during combustion processes. Rather, the mass is simply transformed into gases.

This conclusion is essentially true with all chemical reactions. In all cases, atoms are not created or destroyed; they are simply broken apart, rearranged, or put together in new ways. Of course, these new resulting combinations of atoms can form very new, very different substances. But the mass of the atoms before the reaction and the mass of the atoms after the reaction are always equal.

Modern exceptions to this law have been made to allow for nuclear processes, including fusion, fission, and matter-antimatter reactions. In these cases, mass can be converted into energy and vice versa.

What Are the Implications of This Law?

For chemists, the implications of this law are many. First, the law allowed for chemical reactions to be fully understood and fully quantified. Previously ignored chemical substances (like carbon dioxide being released from a fire) were studied and measured.

The law also allows scientists to predict the mass of the products in a chemical reaction. This can be vital in a variety of situations. Rocket fuel, for example, is specifically formulated with the right ratio of kerosene and liquid oxygen so that it burns fully and completely. Knowing the mass of the two products being burned allows scientists to predict exactly how carbon dioxide and water vapor will be produced. From there, scientists can estimate the mass and velocity of the exhaust gases and predict the amount of thrust that a rocket engine will provide.

Law of Conservation of Mass

The formula explains how methane (CH4) combines with oxygen during burning. The process produces carbon dioxide and water vapor. However, a longer look at the formula will reveal that it is imbalanced. Two hydrogen atoms seem to disappear during the process. This seems to violate the law of conservation of mass. A more thorough investigation of the combustion process would reveal that there are multiple molecules of many of the above substances involved in this reaction. The formula can be rewritten, as below, to explain this.

In reality, it is one molecule of methane being combined with two molecules of oxygen gas. One carbon dioxide molecule is produced along with two water molecules. This formula, once adjusted, no longer violates the law of conservation of mass.

In all cases (short of nuclear reactions), the law of conservation of matter holds true. Matter can neither be created nor destroyed. Below are some common examples along with explanations.

The law of conservation of matter states that matter can neither be created nor destroyed. It replaced the phlogiston theory, which was built upon the observation that fuel loses mass as it burns. The work of Antoine Lavoisier, along with many other scientists, proved the phlogiston theory incorrect. The burning of fuel does not destroy mass; it simply allows mass to escape in the form of exhaust gases like carbon dioxide and water vapor. Lavoisier's new theory allowed scientists to more thoroughly explore chemical reactions, allowing for the study and quantification of reactions, their reactants, and their products. Today, chemical reactions like combustion are thought of as processes that rearrange atoms rather than creating or destroying them.

What is conservation of mass?

The law of conservation of mass states that, during processes like chemical reactions, matter can neither be created nor destroyed.

What does the law of conservation of matter state?

The law of conservation of matter states that no matter can ever be created or destroyed. Chemical reactions simply rearrange atoms to form new compounds.

What is an example of conservation of matter?

A common example of the law of conservation of matter is the reaction of baking soda and vinegar. At first glance, the reaction seems to finish with less mass than it started with. But by placing a balloon atop the reaction container, one can see that the lost mass is actually due to the creation of a gas called carbon dioxide.

The Layers of the Earth: Facts, Composition & Temperature

Reactants & Products | What are the Products in a Chemical Reaction?