What is a Conspiracy Charge?

A conspiracy charge is the legal intervention against an individual or individuals for the crime of conspiracy. Conspiracy's definition in law refers to the agreement or effort between two or more parties to commit an illegal act. To qualify as conspiracy, four things are necessary:

The last element or requirement necessary for a criminal charge should be clarified here. While sometimes the parties of a conspiracy do not follow through on the criminal activity agreed upon, there are many things that can be considered overt actions toward the end goal of criminal activity. In a court of law, an overt act can be proved in many different ways since it is defined simply as any action by any individual within the conspiracy to further the ultimate illegal goal. It could be as simple as a receipt from the hardware store proving that one person bought a tool to be used in breaking into the bank the next day, even if the robbery never took place. It is evidence of an overt act and could be enough for a conspiracy charge, provided all three other elements are present.

The agreement requirement is arguably the most important of the four requirements. It demands that in order for there to be a conspiracy charge there must have been an agreement to act on something illegal. Although the court does have the burden of proof in proving someone's involvement, an agreement does not require physical evidence, the commission of the crime, or a verbal or handshake agreement. Sometimes the surrounding circumstances are enough to suggest an agreement. For example, on Monday, Billy decides to ask his friend Ted to help him and they conspire with each other to kill Billy's coworker Bob on Wednesday. On Tuesday, Ted comes to Billy's house with duct tape, trash bags, and a tire iron. Even if they never successfully kill Bob, there is a clear agreement between them to commit the act.

Although a conspiracy is by definition an agreement between people, a unilateral conspiracy is one where only one person is guilty. This could be in the case of a person attempting to conspire with an undercover police officer or with someone who thinks it is a joke. When there is no intention on the part of one individual, the other can and will still be charged where conspiracy is present.

Although the rules of charging individuals based on the agreement alone vary from state to state, it is widely held that conspiracy requires the involvement of two people. The unilateral approach to conspiracy suggests that both parties do not need to be guilty; just one person needs to have a guilty mind, also called mens rea. The bilateral conspiracy, on the other hand, means both parties have guilty minds and this is required in certain states for a conspiracy charge.

For example, an undercover police officer joins a gang. He becomes close with two of the gang members and the three of them make an agreement to hold up a convenience store. Two of the three co-conspirators had criminal intent, so this would be considered a conspiracy charge. However, if the undercover officer had only made an agreement with one of them, in some states this would not meet the requirements.

In most states, the intent requirement for a conspiracy charge means that both parties must have a specific intent or a specific illegal goal in mind. If the guilty mind is present, also called mens rea, in a court of law, then this requirement is met. If there is more than one person or party involved in a conspiracy, then at least two must have a guilty mind to be considered to have a specific intent. To use the previous undercover agent example, if the same officer had only made an agreement with one person in the gang to hold up the store, things would have been different. In most states, this would not be considered conspiracy since the undercover officer never had any actual intent to follow through on the illegal activity. 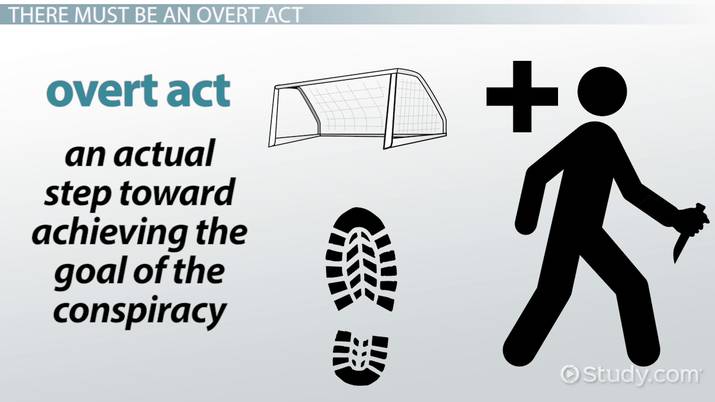 Try it now
Back
Coming up next: Mitigating Circumstances in Law: Definition, Meaning & Examples

The overt act requirement of a conspiracy charge is less straightforward than the other requirements since it can be difficult to determine what constitutes an overt act. A criminal conspiracy charge requires action in the direction of the forward movement of an illegal objective. This act can happen during the process of completing the crime or in preparation for it. It must be connected to the crime in some way in order to meet the overt act requirement. This is considered such an essential step in charging someone with conspiracy because mere talk of a crime does not always express intention. For example, Bobby and Fred are hanging out in Bobby's mom's basement playing video games. Bobby and Fred really hate Tim who works at the local arcade. Bobby says "we should set his car on fire." Fred laughs and says "yeah we should set his car on fire. That'll show him." The next day, Bobby buys a blow torch to set Tim's car on fire. This would be an overt act that would solidify his actual intention to set Tim's car on fire, even if Fred thought it was a joke.

A conspiracy charge, according to federal and state statutes, will not result in more than a five-year prison sentence or a fine of up to $250,000, if it is a felony. That might seem like a small consequence, especially if it involves conspiracy to murder or conspiracy to commit a crime that is seriously heinous. However, it is important to note that charges for conspiracy and charges for the actual crime are separate charges and are treated as such. A serial killer might conspire with his brother to kill seven people and chop up their bodies. They will each be charged for their role in each of the crimes in addition to conspiracy to commit murder and will serve their sentence for all of their crimes.

As a result of one of the most infamous criminal conspiracies in all of history, Abraham Lincoln was shot dead on April 14, 1865. Two weeks prior, the group involved in his death had attempted to abduct him, but it did not go as planned. Instead, John Wilkes Booth shot Lincoln in the back of the head as conspired by a group of people wanting to throw the government into chaos. Booth was later shot and four of his co-conspirators were hanged for their involvement in the conspiracy.

In June of 1964, three civil rights advocates and Freedom Riders, Schwerner, Chaney, and Goodman, were targeted by the Ku Klux Klan. A KKK member worked as a police officer and he pulled the three activists over, stalling them until the other conspirators could get ready. Then he released them, only for them to be chased down by the rest of the group, brought out to a secluded area, murdered, and buried in graves that had been dug prior. The graves existed prior to the murder, so even if the men had not been killed, the conspirators committed overt acts by pulling them over, chasing them down, and digging the graves.

A conspiracy charge in law is a result of a criminal conspiracy. Conspiracy within this context is defined as an agreement between two or more people to commit an illegal act. In order to result in a charge, the conspiracy must have all four of the following elements: a clear agreement to do something illegal, the agreement is between two or more parties, each party's specific intent to commit the crime, and the presence of an overt act. An overt act in conspiracy refers to any actual step toward achieving the goal of the conspiracy. This could be buying a weapon for use in an attack or clearing out one's trunk for the transporting of the person one intends to kill. In most states, the agreement element is perhaps the most important. There must be a clear agreement between parties to accomplish an illegal or criminal goal.

Although a conspiracy charge does typically involve intent on the part of all parties involved, a unilateral conspiracy occurs when one party does not contribute to an actual agreement, but the other party has specific intent to commit the crime. A common example would be an undercover police officer who makes an agreement with someone who actually plans on committing the crime.

What are the elements of a conspiracy charge?

The elements of a conspiracy charge require the four following elements:

1) An agreement to commit a crime

2) The agreement is between two or more people

4) Each party has specific intent to commit the crime

What is an example of a conspiracy charge?

An example of a conspiracy charge could be two people that make an agreement to kill someone and buy the weapons to do it. They are charged with conspiracy, even if they never fully follow through on killing the person.

What does being charged with conspiracy mean?

Being charged with conspiracy means someone engaged in the act of criminal conspiracy. A conspiracy charge means that two or more people made an agreement toward some illegal goal and made some step toward that end.

What is Obstruction of Justice? | Overview, Punishment & Examples

Conspiracy in Law Overview & Examples | What is a Conspiracy Charge?
Related Study Materials

What is Obstruction of Justice? | Overview, Punishment & Examples