There are three high-level rock categories defined in geology: igneous rocks, sedimentary rocks, and metamorphic rocks. Each category is determined by how the rock type forms. This lesson will teach about metamorphic rocks. Metamorphic rock is any rock that has been changed or metamorphosed in a solid state in response to alterations in the surrounding conditions.

The principles of thermodynamics state that all things try to reach a state of equilibrium corresponding to their surrounding conditions. If those conditions change, the object will re-equilibrate. Rocks are no exception to this rule. Metamorphic rocks form when a preexisting rock, called the protolith, experiences an environment different from the environment in which it formed; this is most commonly an increase or decrease in temperature or pressure. When the protolith rock is exposed to new pressure and temperature conditions, its mineral composition, mineral structure, and textures change to a stable form in the new environment. A key point in the definition of metamorphic rocks is that this transformation happens in the solid state, meaning the changing temperature or pressure does not melt the rock. Rocks that are formed from a melt, like magma and lava, are classified as igneous rocks. So, if the changing surroundings caused the protolith rock to melt and recrystallize, it would be classified as a metamorphic rock but as an igneous rock.

Limestone and marble are examples of a common protolith and resulting metamorphic rock. Limestone, the protolith, is changed into marble, the metamorphic rock, increasing pressure, and temperature. Both limestone and marble are made mostly of calcium carbonate, but they look entirely different. The higher temperature and press conditions force the calcium carbonate to change its crystal structure to a form stable under the new environment. Before the change, limestone usually is grey and featureless, not considered particularly pretty. On the other hand, marble tends to be bright white with subtle, wavy bands of gray. Its beautiful appearance makes it a popular choice for countertops and fireplace mantles. 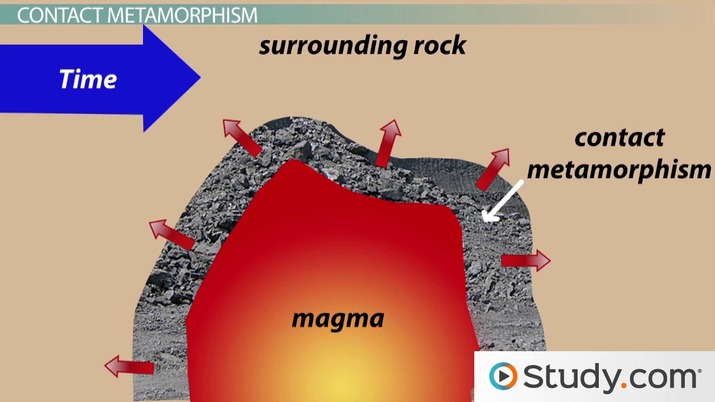 Try it now
Back
Coming up next: Rock Deformation: Causes and Types

The contact metamorphism definition is a specific metamorphism that happens when rocks meet a hot source that quickly raises their temperature. This rapid rise in temperature causes the rock directly surrounding the heat source to metamorphose through a series of chemical and mineral changes.

What is the major source of heat for contact metamorphism?

The primary heat source for contact metamorphism is an intrusion, or injection, of magma into existing, cooler rock layers; this most commonly happens at a volcano. During the formation of a volcano, hot, molten rock from the earth's interior intrudes upward and outward into the overlying earth's crust. These intrusions continue to happen until the magma reaches the earth's surface and erupts as lava to form a volcano. The crust underneath that volcano is full of rocks that the heat of repeated magma intrusions has metamorphosed.

Because contact metamorphic rocks form under conditions of high heat but low pressure, they have specific distinguishing characteristics. They are primarily undeformed mineral crystals, lacking or having very subtle mineral bands or foliation. They form in a ring, or aureole, surrounding the hot magma intrusion. The width of this ring depends on the size of the intrusion, but because only the rocks close to the heat source are metamorphosed, contact metamorphism usually occurs over a small area.

Some examples of common contact metamorphic rocks are quartzite, hornfels, and marble.

What is regional metamorphism?

The regional metamorphism definition means when rocks are exposed to both high heat and pressure. Most commonly, this occurs during the formation of mountains. Earth's top layer, the lithosphere, comprises separate, moving pieces known as tectonic plates. Mountain belts form when two of these plates collide. During this collision of plates, rocks of the earth's lithosphere are squeezed, folded, piled on top of each other, and buried. These processes significantly raise both the temperature and pressure of the rock's environment. The rise in pressure and temperature causes the rocks to metamorphose into new, stable rock through chemical and mineral changes.

What is the difference between regional and contact metamorphism?

What is an example of a regional metamorphic rock?

Contact metamorphism is one of the main types of metamorphism. It is the transformation rocks undergo they come into contact with a very high heat source.

The process of contact metamorphism usually happens when a hot, magma body intrudes into the earth's crust. The magma heats the surrounding rock, causing it to metamorphose.

What happens during regional metamorphism?

During regional metamorphism, rock layers are compressed, folded, and buried. This process increases both the pressure and temperature environment surrounding the rocks and causes them to transform into a new rock that is stable in those conditions.

What is regional metamorphism in geology?

Regional metamorphism is one type of metamorphism in geology. It is the widespread transformation of rocks under high temperature and pressure conditions.

An example of contact metamorphism is limestone surrounding a magma chamber being turned into marble. This process happens because marble is a more stable form of rock in the magma intrusion's high heat area.