Anne Kamiya, Danielle Reid
Explore copolymers. Learn the definition of a copolymer and understand its properties. Discover the different types of copolymers with various examples. Updated: 05/15/2022

What is a Copolymer?

Lego blocks are made from a plastic called acrylonitrile butadiene styrene, which is a polymer comprised of three different monomers: (1) acrylonitrile, (2) butadiene, and (3) styrene. In chemistry, a monomer is defined as a molecular subunit that bonds to numerous identical subunits to create a very large molecule called a polymer. Although Lego blocks are polymers, they are also classified as copolymers because their plastic is made from three kinds of monomers. What is a copolymer? Copolymer is the scientific term for a polymer created from two or more different monomer subunits. Because Lego blocks contain many acrylonitriles, butadiene, and styrene subunits, the plastic it is made from is a copolymer. 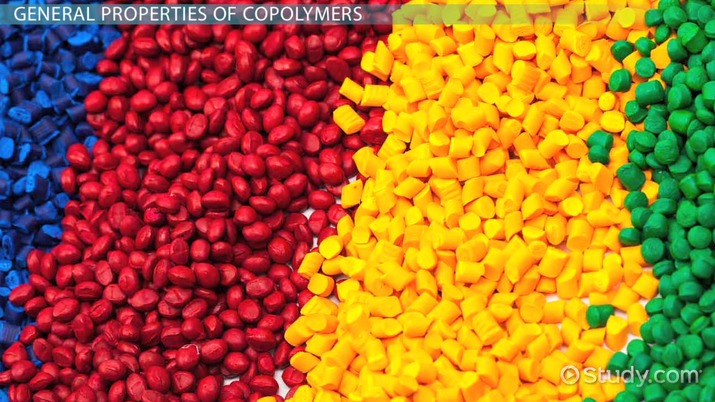 Try it now
Back
Coming up next: Globular Proteins: Definition, Structure & Examples

A homopolymer is a polymer chain that has been created from many repeating subunits of only one kind of monomer. A real-world example of a homopolymer is polystyrene, made from many interlinked styrene molecules, and another name for the Styrofoam used in coffee cups.

Copolymer structures are more easily described using a Lego analogy where each unique Lego block type represents a unique monomer. Although many structures built from the Lego blocks could be classified as a copolymer, there are several specific and distinct ways to put the blocks together. The Lego equivalent of a block copolymer would be like stacking one structure from only 2x2 red Lego bricks (A) and stacking a second structure from only 2x4 blue Lego bricks (B) and then connecting the two separate structures, e.g., AAAAA-BBBBB.

The Lego equivalent of a random copolymer would be building a stacked Lego structure out of 2x2 red Lego bricks (A) and 2x4 blue Lego bricks (B), which are put together in any order, e.g., ABAAABB.

The Lego equivalent of an alternating copolymer would be building a stacked Lego structure out of 2x2 red Lego bricks (A) connected to 2x4 blue Lego bricks (B) in consistent alternating order, e.g., ABABABAB.

The physical properties of copolymers are largely influenced by molecular weight and chemical structure. Some specific factors that affect copolymer properties include the length of the copolymer chain, the presence of any branching chains (chains that stick out from the main structure like branches), and the presence of any cross-linkages between chains, and a crystalline (organized) or amorphous (disorganized) structure.

There are numerous copolymers with more applications than can be listed in a single lesson. Copolymers are used to make hard and soft plastics, rubber tires, toys, electronics, insulation materials, building structures, water pipes, pharmaceuticals, and much more. A few specific copolymer examples and their applications include:

Copolymers can feel, look, and behave very differently from each other, even if they share one monomer subunit, and these factors are influenced by the physical properties of the copolymer. How long a copolymer chain is, its molecular weight, whether or not there are branching chains or cross-linkages between the chains, and whether the molecule has a crystalline or amorphous structure all affect the utility of a copolymer. Some copolymers are very bendable or rubbery, and these flexible types are called elastomers. Other copolymers become soft and pliable when heated; these are called thermoplastic copolymers. Unlike thermoplastics, thermoset copolymers are not malleable when heated. The strength of copolymers can also vary from very soft to very rigid. In general, longer linear chains with branches and a high molecular weight make a copolymer stronger.

What is a copolymer used for?

Copolymers are used for making a variety of materials with industrial, pharmaceutical, and every day use. A few examples of the uses of copolymers include plastic pipes, insulation for electrical wiring, synthetic clothing, medical non-latex gloves, hard plastics, soft plastics, and rubber bands.

What is a copolymer in chemistry?

In chemistry, when a polymer is made from more than one type of monomer subunit, it is called a copolymer. Copolymers may be made from two, three, or even more subunits that come together in different formations, such as a random copolymer, an alternating copolymer, or a block copolymer.

What is Acrylic Polymer Made Of? | Is Acrylic Plastic?

What is Acrylic Polymer Made Of? | Is Acrylic Plastic?