Counterpoint is a musical style of composition that employs more than one voice; however, rather than having a melody line and a harmony line, each voice is equally important in the composition and carries part of the melody. Counterpoint is a form of polyphony that creates a dialogue between the treble clef and the bass clef, and each contributes something meaningful to a joint conversation instead of one serving a supporting role to the other. Counterpoint is also used in vocal ensembles. Instead of providing harmony, each voice contributes to an elaborate, overlapping melody line.

The term "counterpoint" and its adjective form "contrapuntal" originated from the Latin expression punctus contra punctum, which literally means "point against point" or "point for point." The points refer to notes. A composer of contrapuntal pieces compares measures note for note in the treble and bass clefs to see how they complement each other, both in harmonic terms and in time units. In contrapuntal music, the composer sets up a melody for a melody to create a dialogue of equals between the right hand and the left hand of the pianist or in a multi-vocal or multi-instrumental performance by an ensemble.

A precursor to more complex forms of counterpoint is the round. The well-known children's song Row, Row, Row Your Boat is a prime example of a round. When sung by a single voice, this is a simple melody. With accompaniment, the song could include chords for harmony. However, the round introduces another voice singing the same melody at different time points. This way, the melody plays against itself, with each part of the round having equal significance.

One of the most iconic musical forms of composition in counterpoint is the fugue, pioneered by Johann Sebastian Bach. In a fugue, which is an imitative form of counterpoint, competing melodies play off each other in a duel of imitation.

In the extract above from Fugue no. 17 in A-flat major, BWV 862, from book 1 of The Well-Tempered Clavier by Bach, the bass clef contains an imitation of the melody in treble clef, but there is no exact parallelism of note per note.

Ludwig van Beethoven was said to have been influenced by Bach, and even in a sonata form, he incorporated counterpoint. 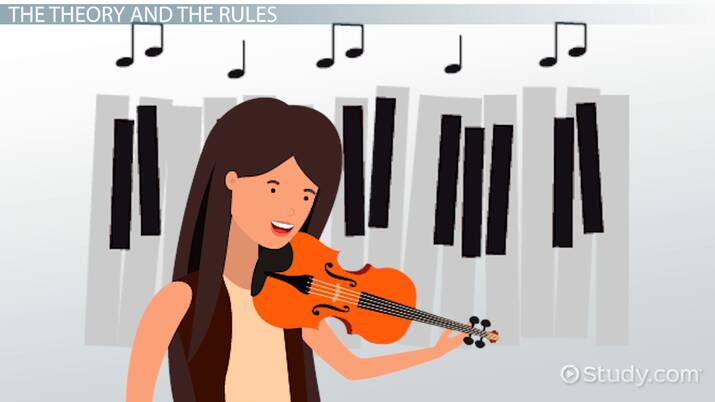 Try it now
Back
Coming up next: Duet: Definition, Singers & Songs

In music theory, counterpoint is seen as a way to build interest in a composition while avoiding voices singing in unison. There has to be a high degree of contrast between the different parts of counterpoint.

There are several constraints on what competing melodies in counterpoint can do. Parallel octaves and parallel fifths are not allowed. Voice crossing, which occurs if the higher voice descends below the lower or vice versa, is avoided. Although counterpoint and harmonizing are distinguished from one another as polar opposites in compositional method, counterpoint is considered the theoretical background of all harmonic theory.

The method of teaching counterpoint that is still used today was perfected by the German composer Johann Joseph Fux with his book Gradus ad Parnassum. The title of the book means "ascent to Mount Parnassus." Mount Parnassus is the highest mountain in a range of mountains in Greece, and it became a general reference to the gradual mastery of a difficult topic with many levels of understanding. Fux divided counterpoint into five species, each with a higher level of complexity.

In the first species of counterpoint, there is one note in the counterpoint melody for each note found in the cantus firmus. The notes must be at different intervals from the original notes so that the melody is not merely transposed. This is the first step and the most basic form of counterpoint. Because of harmonic considerations, the placement of the counterpoint notes is actually fairly constrained. The voices must stay within a maximum compass of an octave and a fifth, and the intervals chosen must be non-clashing to avoid dissonance.

Like the previous species, the third species involves subdivisions of the beat. In the third species, each note of the cantus firmus is set against four equal-length notes. All previous counterpoint rules and constraints still apply.

With fourth species counterpoint, the notes of the cantus firmus and the counterpoint are the same length, but they begin on different beats. This creates a form of off-beat syncopation. All previous constraints apply.

With all forms of counterpoint, parallel octaves and fifths are to be avoided, and voice crossing is not allowed.

Counterpoint grew in popularity during the Middle Ages, and with the introduction of two-handed instruments such as the harpsichord and the piano, composers could introduce compositions that a single musician could play with two voices. In this golden age of polyphony, both harmonic accompaniment and counterpoint flourished.

In the late Medieval period, counterpoint was developed by taking a pre-existing melody, called a cantus firmus or fixed song, and adding variations on the theme in contrapuntal contrast. Examples of counterpoint can be found in the works of Giovanni da Palestrina and Orlando di Lasso. This was the golden age of counterpoint.

In the early 18th century, Johann Sebastian Bach created elaborate contrapuntal structures in his compositions, reviving and reinvigorating the form. Some speculate that because Bach was left-handed, he could be just as nimble with his melodies for the bass clef and answer note for note the melodies he wrote for the treble clef. Bach is credited with inventing the fugue, a contrapuntal form in which treble and bass clef take turns carrying the melody.

Wolfgang Amadeus Mozart and Ludwig van Beethoven created examples of counterpoint in the Classical age of music. Counterpoint was relegated to developmental passages in the 19th century, when the Romantic movement encouraged direct emotional expression in melodic outpouring with accompanying harmonics. Although interest in counterpoint subsided in the Romantic period, it was revived by Felix Mendelssohn in the mid-19th century.

There was a resurgence of interest in counterpoint during the 20th century. Soviet composers such as Dmitri Dmitriyevich Shostakovich made use of counterpoint. Arnold Schoenberg even applied contrapuntal principles to atonal music, bringing counterpoint into the most progressive compositional styles.

Modern examples of counterpoint abound in more accessible works, such as musical theater. Counterpoint is in Leonard Bernstein's "Tonight" from West Side Story and Claude-Michel Schönberg's "One Day More" from Les Misérables. In 2021, Lin-Manuel Miranda's song "We Don't Talk About Bruno" from Disney's Encanto topped the Billboard chart at number one with an ensemble performing a fugue. Counterpoint remains popular in the 21st century.

Counterpoint is a compositional device for the creation of polyphony, in which each voice contributes equally to the melody of the composition instead of one voice carrying the melody and all others being relegated to harmony. Counterpoint avoids parallel octaves singing in unison, opting for independent melodies that blend harmoniously. Counterpoint is all about the relationship of note intervals and their movement types. The theory of how to compose contrapuntal music was set forth by Johann Joseph Fux in his book Gradus ad Parnassum, in which he rigorously defined five species of counterpoint. One of the best-known classical composers of contrapuntal music was Johann Sebastian Bach. However, counterpoint is not limited to classical or formal music. A recent example of counterpoint, which topped the Billboard charts at number one in 2021, was Lin-Manuel Miranda's "We Don't Talk About Bruno." Counterpoint is a classical musical device that has been in use for centuries and continues to be used in both formal and contemporary music.

What is an example of counterpoint in music?

An example of a musical form that employs counterpoint is the fugue. It was the first form to use the counterpoint method to full effect. In a fugue, the treble and bass clef take turns carrying the melody and the harmony, switching from one to the other. Bach is famous for perfecting the fugue.

What does counterpoint mean?

What is the difference between harmony and counterpoint?

Both harmony and counterpoint involve polyphony (more than one voice), but with counterpoint, each voice carries an independent melody. With harmony, one voice is dominant, and other voices support that voice by harmonizing.

What is the purpose of counterpoint?

The purpose of counterpoint is to create an interesting relationship between independent melodies in a musical composition. Each voice in counterpoint is equally important, rather than having one serve a supporting role to harmonize with the other.

Modes of Music: Theory, Scales & Effect | What is a Mode in Music?

Modes of Music: Theory, Scales & Effect | What is a Mode in Music?