What is Criminal Law?

A criminal offense is simply an action that breaks an established criminal law. The failure to report such activity can also constitute a crime in certain circumstances. A criminal offense provides the basis for an arrest.

Criminal law can be established at both the federal and state levels. While some laws apply nationwide, some states will have different criminal laws than others. However, the federal government develops the rules that govern the criminal law system so that everyone accused of a crime receives the same punishment or treatment. 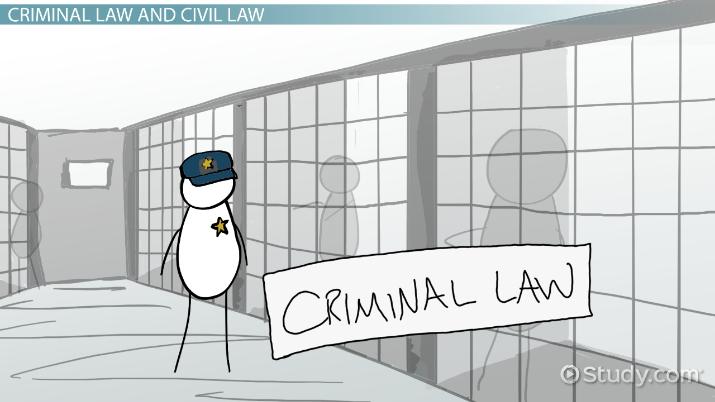 Try it now
Back
Coming up next: What Is the Rule of Law? - Definition & Principle

Criminal law is different from civil law. The main objective of criminal law is to identify a breach of the rules of the Criminal Code, while the purpose of civil law is to rectify wrongs committed within private dealings. If someone is arrested for shoplifting, their charges are dealt with under criminal law since theft is a crime. If someone is injured on another person's property, they can sue for damages; this is considered a civil law matter. Civil law can involve cases between individuals, groups, or organizations and functions outside the realm of breaches of the Criminal Code.

While there is no crime at the base of a civil law matter, there are misconducts. Misconduct occurs when someone or an organization has wronged another person or organization, or something has happened between two individual parties where one feels the other has done wrong. Civil law tends to deal more with financial recompenses for damages; however, civil law matters can be directly related to criminal law cases, such as when someone sues another person in a wrongful death suit. In this case, one person is holding another person responsible for the death of someone, whether or not the person accused was charged or convicted in criminal court.

On the other hand, criminal law focuses solely on actions that break the law. The punishments in the case of a guilty finding may be financial, as is found most often in civil matters; it may also involve incarceration, probation, or other restrictions on freedom, such as rehabilitation programs or no-contact orders. In criminal law cases, the adversaries are not individuals but the state or federal government against an individual, group, or organization involved in illegal behavior.

The purpose of criminal law is to define acceptable expectations of behavior within a society. There are several objectives to the creation and upholding of criminal law: preventing crime; protecting the public; punishing and rehabilitating those who commit crimes; supporting those who have been victimized by crime; and, on a larger scale, defining the moral code of society and dictating what is considered proper or correct behavior. Countries can provide citizens with order and stability through an established set of criminal laws. Knowledge of criminal law can guide the choices of those governed by it.

The most visible point of criminal law is to prevent crime and protect the public. The Criminal Code details actions that can harm others physically, financially, or personally. Through the criminal justice system, unwanted behaviors can be identified and punished in an attempt to rehabilitate those who commit them and deter others from becoming involved in criminal activity. Deterrence makes society a safer place in which to live.

Criminal law also supports victims of crime by seeking out who committed the crime and punishing them for it. Financial compensation may be part of the punishment, but it is primarily the sense of justice that comes from seeing someone punished for their misdeeds and the hope that the accused may one day see the errors of their ways that help victims move on from the event.

Overall, criminal law is like a guide to the expectations of society. A lack of knowledge of the Criminal Code is not considered a defense against a criminal charge; this shows that the established rules are a statement of the morals of a particular society and what the people value.

Several goals drive the institution and maintenance of criminal law. These are listed below:

Several essential elements make up the whole of criminal law. These address the actual creation and dissemination of laws, the enforcement of the law, the aspects needed to try a criminal case in court, and how that case is dealt with inside the criminal court system. Some of the most important elements include the following:

There are many different examples of criminal law cases. Differences can be seen between the laws found in various places, but there are often similar laws worldwide. Some common criminal law examples include:

The goals of criminal law are the establishment of order in society and the deterrence of crime. Criminal law is also designed to rehabilitate those who commit a crime, and give retribution for victims of crime through the incapacitation of criminals and restoration of loss, when possible. The written code (substantive law) is the basis of the criminal law system, which also relies on the concepts of action (actus rea) and intent (mens rea) to determine guilt. Within the criminal court system, the burden of proof lies on the prosecution as they attempt to right the wrongs done by crimes against people, crimes against property, statutory crimes, and inchoate crimes.

What is the purpose of criminal law?

The purposes of criminal law are numerous. Its main function is to keep order and deter crime. Criminal law also punishes and rehabilitates people involved in crime and supports victimized people.

What are the goals of criminal law?

Criminal law is a framework with which to guide citizen behavior. It outlines illegal acts and defines their punishments. It also creates a system in which people who commit crimes are tried and punished.

Assault vs. Battery | What is the Difference Between Assault & Battery?

Assault vs. Battery | What is the Difference Between Assault & Battery?